An excerpt from Man’s 4th Best Hospital, Now available in paperback from Penguin/Berkley.

And in the Fat Man Clinic, what about billing?

We would do it ourselves on our screens. Using HEAL, the EHR or Electronic ‘Health’ Record system that BUDDIES had installed in Man’s 4th Best and its other hospitals and clinics, at a cost of 2.6 billion dollars. Incurring a 20-year debt.

Without any data proving that it would be good for safety, or quality, of patient care.

We docs had had an orientation to HEAL. A four-hour workshop with a rosy-cheeked and smiling, clean young guy dressed casual, named-tagged Bob.

“Folks,” Bob said, “we are at war. Against the health insurance companies.”

It turned out that this war, like all wars, was about money.

And how did we fight this war?

By gaming HEAL codes of each disease diagnosis and treatment to max out money.

Health insurance, the army on the other side of the screen, tried to minimize our maximums of money. “Bad news,” said Bob. “The good news? We have 334 people in the Billing Building! ‘The Billables’—also the name of their a cappella group—are our allies, our in-house battalion in the war. In real-time they track your choices to max out money.” Bob made clear that the more expensive the Dx and Rx codes clicked, the more 4th Best money was made.

“We nicknamed our elite billing-enforcer team ‘Coders 4 Cash.’ They work out of a war room at an undisclosed location. We are watching each of you for your choice-of-click codes—from admission to discharge. Fiscally, doing procedures on patients makes the most money. Surgical procedures make the most most money. Medical care makes the least.” He paused. Then said fiercely, “Except for the diagnosis of ‘sepsis, severe.’ After you click ‘sepsis,’ the pop-ups ask: ‘mild,’ ‘medium,’ or ‘hot—severe.’ Like at a Thai restaurant. But sepsis is by definition a life-threatening blood infection—always severe. Monetized, compared to mild or medium, severe is a cash cow that wins hands down. We will dog you till the sun goes down: if you click ‘sepsis,’ you always click ‘severe.’ The code for cash.”

“Camouflage.” He went on. I tuned out, but caught his summary: “It all boils down to earwax.”

He spoke passionately about how to squeeze the most money out of earwax. First, in a moving historical tour, he said, “Earwax is an untapped pool. Rampant in our senior citizens, a cause of deafness. How many of you routinely earwax your patients?”

We took this as rhetorical, and did not reply.

“The money in earwax flows by clicking this diagnosis in almost all patients—and removing as much volume as you can.” Bob then showed on the big screen a doctor at HEALing. “You have to choose between two codes for earwax removal. 40773 is for just taking a syringe and washing it out, reimbursed at $77.33; but 40774, using the metal scooper thingee to remove it: $182.57. The difference? $105.24. And doing both? $259.90. More than the sum of the parts. Multiply per person per year? Millions. Guess which procedure, for full extraction and max liquidity, is preferable. Both. Do the right thing.”

The right thing for all of us of the Fat Man Clinic was to walk out. I was with Chuck and Naidoo, walking down the hallway.

“HEAL is hell,” said Naidoo, who was expert in computers. “The only good thing about HEAL is that EPIC is worse. The worst.”

“It’s the most inhumane. Of EPIC proportions. Thus its name.”

“Yes,” said Naidoo. “One day a few months ago, soon after I joined an ongoing group pediatric practice in the suburbs, I was told that I was always required to click ‘yes’ on the box for ‘cardiac exam normal’—even when I knew that it was irrelevant to that particular child, and I had not done one. The only purpose of that click was to gain a few more dollars. I could not go along with that, and had to leave. We doctors do not lie.”

“No foolin’,” said Chuck. “Or else its so long Hippocratic oath.”

“Mind you, I’m no saint about money. I grew up poor in India, and now I value things like eating, clean clothes, and safety. In fact, after I graduated from medical school, I worked in a leper colony in Bihar state for a year. I eventually married and came to West Coast, and I met Fats. One night—over a huge meal, mind you—I told him about my time with the lepers. He wanted to hear every detail. And when he finished he said, ‘I wouldn’t do that for a million dollars!’ And I said, ‘Neither would I.’”

Samuel Shem is the author of the House of God and Man’s 4th Best Hospital. He can be reached at his self-titled site, Sam Shem. 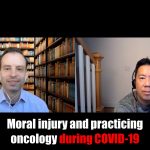