I’ve named the woman lying on the dissection table Betty. She’s 92 and married, with three daughters, twice as many granddaughters, and a retriever named Boots to show for it. Her husband is a woodworker, the last of his generation. He carved Betty’s favorite rocking chair, the one she’d drag onto the porch when the chickadees were out, out of Carolina Cedar. Betty says she’s useless with a wood saw, but quite handy with a pair of binoculars. Last year she spotted fifty-seven avian species, a particularly impressive feat given that she hardly left home.

“Birdwatching,” Betty says as I angle the scalpel into her bicep, “is a lot like dissection: It’s hard to differentiate the American goldfinch from the New World warbler in drawings, no matter how gifted the artist. But once you’ve spotted a goldfinch, its body the deep yellow of charred corn, it’s impossible to confuse it with the washed-out warbler. I imagine,” she chirps, “it’s the same way with the triceps and the biceps.”

Since the 20th-century move towards medical ethics and patient safety, medical school curriculums have been transformed. The old “learn by doing, even if you mess up sometimes” system has been replaced with one of the students in pristine white coats, hands tucked behind their backs, doing their best to learn without getting in the way. The vocabulary has changed to reflect this: Medical students now refer to their time in the hospital as “shadowing,” indicating the many hours they spend pressed up against the wall, sentenced to watch but never touch, think but never act.

Perhaps this shift is why the cadaver lab feels sacred. Here, elbow-deep in fascia and bone boxes, the old rules still apply. There is no “asking the doctor” where the femoral nerve is: The dissection, mistakes and all, belongs to us, the students. Of course, we weren’t always so comfortable.

My first dissection sounded simple enough: “Meet the body” and collect a skin sample. I huddled around the open body bag with my group, toe-to-toe in silent prayer, our standard-issue gowns initiating us into a small, scientific tribe. Our first cuts were conservative, removing a mole here, a birthmark there. But by the end of lab, we’d already become bolder.

Soon we were digging around for the pancreas, passing the greater omentum back and forth, and somebody had accidentally punctured the bile duct, causing half of Betty’s abdomen to turn a sticky, forest green. Through our discoveries and our missteps, Betty’s expression remained serene: Her grainy blue eyes fixed on the dissecting lamp, her soft palms turned towards the sky.

Before long, I was comfortable enough to return to the cadaver lab alone. In the early mornings, drenched in the honey of Carolina sunshine, the lab felt less like a classroom and more like a pitstop – somewhere to stretch your legs before continuing the trek to heaven. On those mornings, I’d compare the structures on Betty’s body with those of the cadaver lying next to her, a 47-year-old man with lush black eyelashes and a clear penchant for working out.

The two cadavers were an unlikely pair; Betty was twice her neighbor’s age and a quarter his size, without his risky interests or passion for motorbikes. But while their living habits differed, they’d made the same choice for the afterlife: whole-body donation. I imagine that gave them a fair amount to discuss while I hunted around for the subscapular nerve.

In the post-grave robbing era, most medical schools source cadavers through whole-body donation programs. The body release form promises the donor’s family that their loved one will be treated with respect, serving as an invaluable teacher to a class of future physicians.

I imagine that Betty entered the donation program in her post-memorial service Sunday Best: a woolen, lilac cardigan, sensible shoes, and a hummingbird brooch pinned to her chest. By the time I met her, she’d been bathed in formaldehyde, given a blunt haircut, and the brooch was nowhere to be found. From then onwards, the process of dissection felt dehumanizing. It was no fault of the school or the program. It’s just hard to feel respectful when you’re disassembling an abdomen.

Perhaps I’m hyperaware of these difficult moments because I’m being trained in the era of medical ethics, where patient rights and respect are foremost. Did Betty’s family know what was happening to her? Was there a trace of regret in her misty eyes? These are questions that I will never be able to answer.

However, as anatomy draws to an end, I can confirm one thing: Without Betty’s donation, I would never have been able to differentiate the triceps from the biceps, let alone the goldfinch from the warbler. For that training, I owe her a tremendous debt.

Are there more psychiatric visits during a full moon? 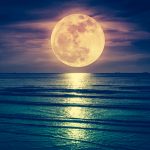