As authors, although we represent a multitude of Asian diasporic identities, we are not representative of all Asian identities. We acknowledge this and add nuance to unpack this whenever possible. The views expressed in this piece are our own.

As we enter another month of America’s racial re-reckoning, anti-affirmative action sentiment has resurfaced like clockwork. Asian-American voices have once again spoken out against racial equity — as central pawns in legal battles to dismantle affirmative action, as scholars upholding false notions of meritocracy and scarcity, and as advocates who choose “proximity” to whiteness over solidarity with other communities of color. For this, we are sorry.

Time and again, Asian-Americans are central plaintiffs in the battle to dismantle affirmative action. We are dismayed by recent attempts to terminate diversity initiatives at institutions like Yale, Harvard, University of North Carolina, and the University of Texas. The white supremacist game plan is clear: to maintain a false narrative of meritocracy and to reappropriate “racial discrimination” in a manner that favors dominant groups. Asian-Americans continue to willingly, and sometimes actively, buy into the model minority myth, which claims that Asian-Americans succeed through some kind of unique work ethic, resilience, and “inherent” cultural characteristics rather than through complicity with systems that exclude Black, Indigenous, and People of Color (BIPOC).

We continue to remind ourselves that the model minority myth was born out of explicit classism and anti-Blackness. It continues to drive a racial wedge between us and other communities of color by aligning us with white conservative interests. As Asian-Americans in the medical field, we have benefitted from the potency of this myth. Sometimes, we have been complicit, as evidenced by the overrepresentation of Chinese- and Indian-American physicians compared to the exclusion of Black, Native American, Hispanic/Latinx, Pacific Islander, and some Asian-American subgroups (e.g., Hmong- and Cambodian-Americans).

A recently retracted article by Dr. Norman C. Wang, a Chinese-American cardiologist, suggests that affirmative action is harmful to minority applicants and trainees. Dr. Wang’s piece and others like it minimize the detrimental impact of systemic anti-Black racism and uphold false notions of meritocracy and scarcity. We are grateful for powerful rebuttals from the medical community and Asian-American experts in selective admissions, pointing out that while “talent is universal, opportunity is not.” We owe it to ourselves and our broader communities to challenge the anti-Black racism embedded within the model minority myth and anti-affirmative action efforts.

As a coalition of Asian-Americans in medicine, we recognize that we need to do better. We call upon our fellow Asian-Americans to denounce the model minority myth and extricate our narrative from white supremacy. We propose the following actions as a start to reclaiming our agency and rebuilding cross-racial solidarity.

We commit to educating others on the potential for racial justice presented by initiatives such as California’s Prop 16 and the potential harms presented by the Department of Justice’s misleading conclusion that Yale University “discriminates against Asian and white applicants.” We will call attention to the actual leaders of anti-affirmative action efforts and how they may use us as pawns to maintain the status quo, despite the majority of Asian-Americans’ support of affirmative action. We will fight against true injustices, including college admissions fraud and meritless advantages for wealthy families at private and public universities.

We commit to challenging the profound influence of structural racism and inequities in purportedly “merit-based” standardized examinations that have historically discriminated against BIPOC and favored applicants from wealthier backgrounds.

We commit to educating others on the exclusionary nature of the 1910 Flexner Report, which led to the closure of all but two historically Black medical schools and directly contributes to the dearth of Black physicians today.

We commit to fighting for racial health justice, even when it is not fashionable to do so. We will take risks in calling out structural and interpersonal anti-Black racism in the moment as active bystanders. We will educate colleagues and members of our community who perpetuate anti-Black racism. When we ourselves are called in, we will strive for cultural humility by listening, reflecting, and changing our own problematic behaviors.

In considering these actions, we recognize the inner tensions that come with greater critical self-awareness. The direct benefits to us may not be immediately evident. However, our true freedom hinges on a shared vision of racial justice for BIPOC. Efforts to address racism impacting BIPOC are critical and essential to our collective liberation.

We must reclaim our agency by uplifting and resurfacing the rich history of Asian-American involvement in cross-racial coalition work. We will honor those that came before us by learning from decades of Black-Asian internationalist solidarity and draw from the legacy of multiracial solidarity movements in our history. The Third World Liberation Front Strike of 1968 and the Rainbow Coalition of 1969 demonstrate the power of unifying our diverse voices in fighting for racial justice. We can strive for the cross-racial solidarity work that Larry Itliong, a Filipino-American labor organizer and farmworker, showed by joining forces with Cesar Chavez and Dolores Huerta to demand better working conditions for California farmworkers during the 1965-1970 Delano Grape Strike. We can learn from Yuri Kochiyama, who opened her home as a gathering place for Black activists and advocated for Japanese internment reparations. We can take risks in striving for racial justice in the spirit of Grace Lee Boggs’ dedication to the Detroit Black Power movement that landed her a file with the FBI. It is medicine’s turn for an anti-racist revolution.

Audre Lorde said, “I am not free while any woman is unfree, even if her shackles are different from my own.” Our collective liberation is fundamentally tied to that of one another; with this in mind, we refuse to be a racial wedge any longer. Affirmative action has opened the door for white women and East and South Asians in medicine to date, but the work is not yet complete. Some of us have been late to this fight, but we are here now. Let’s do this together.

A DO's take on the FIGS faux pas 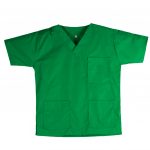