Medicine is a moral pursuit. Physicians inherit the tools of medicine not only through their training, but also by taking an oath to do good, avoid harm, and tell the truth. Hippocrates, the father of medical ethics, realized that the tools he possessed as a physician could be used for either good or for harm. Even today, the modern students of Hippocrates promise that they will conduct themselves honestly and that their skills will be used for the benefit of society, and not for its harm.

At the most basic level, what assures an individual physician’s faithfulness to medical ethics is their conscience. More broadly, it is the community of peers that holds physicians morally accountable, and finally, society itself.

The moral necessity of truth-telling is as essential to the duty of the physician as are the duties of doing good and avoiding harm. The institution of medicine has always held as sacred that society can trust what physicians tell them. When physicians fail, they must be held accountable. The Nazi Doctor’s Trial at Nuremberg is one such example in which physicians were held accountable for violating their ethical obligation to humanity.

Regrettably, Americans have witnessed in the last few weeks an affront to the fundamental trust between society and physicians, which threatens the foundation of medicine itself. Dr. Stephen Hahn, head of the U.S. Food and Drug Administration, recently made inaccurate remarks about the potential benefit of convalescent plasma for treating COVID-19. Dr. Robert Redfield, head of the Centers for Disease Control and Prevention, recently oversaw the release of potentially dangerous guidelines about COVID-19 testing. While both have attempted to walk back their initial statements, their credibility, and that of medicine itself, is now tarnished.

Intentionally misleading a patient, particularly about the benefit of a proposed treatment, is an egregious ethical violation for any physician. When the power of misinformation affects millions of Americans, not only is the potential for harm amplified, but so is the moral culpability for the act itself. Whether or not anyone was directly harmed is only part of the issue. Physicians ought not mislead the patients or the public. When they do, they should be held accountable.

The duty of physician officials in the government exceeds that of other officials. As physicians, they have a unique moral obligation to do more than protect the constitution from enemies, foreign and domestic. They have a duty to be unambiguously truthful, to use their power to do good, and to avoid harm. If they fail in any of those regards, they must be held accountable by their peers, and by society. This is especially urgent when those who appointed them to these positions of authority fail to manifest in their actions the moral necessity of telling the truth, doing good, and avoiding harm. In that case, peer and public accountability are all that is left to uphold these essential ethical standards.

If this level of peer accountability seems extreme, imagine the consequences if the most powerful and public-facing physicians in the country continue to erode public trust in their own profession. Physicians have always held one another accountable to the highest ethical standards of medicine.  The need is more urgent than ever. The potential for great human suffering demands that the unified voice of medicine muster its moral courage and act as though its life depends on it.

Health care should be apolitical, but it isn’t [PODCAST] 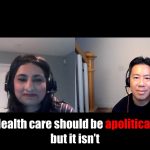 What do you picture when you think of health care?

The failure of the U.S. government’s physicians to do good, avoid harm, and tell the truth
1 comments