That’s the question that will be on the minds of many as the Food and Drug Administration releases a second study on the absorption of sunscreens. The reality is that answering the “safe” question is becoming more complicated—and more important as well, given the fact that so many of us use sunscreens as part of our own sun safety efforts, while others (me included) use sunscreen as part of our daily routine.

Despite the questions raised in this study, the FDA concludes: “These findings do not indicate that individuals should refrain from the use of sunscreen.”

It is a difficult balancing act pitting product safety up against the prevention of some very nasty cancers. It leaves many consumers and experts in the midst of a quandary of what to do and what to recommend.

Here is a factoid that many of you may not be aware of: We really don’t know as much as we need to know about the basic safety of most sunscreens.

Some are considered safe with a low risk of absorption. They are the mineral-based sunscreens that use zinc and titanium. However, those aren’t particularly cosmetically appealing, since they can leave a visible residue on the skin after application.

On the other hand, most sunscreens we use rely on a chemical base, and which do not usually leave whitish color on the skin. We apply them regularly, assuming that the ingredients have been tested to demonstrate that they do not cause harm. However, many of us have been surprised to find out that such testing—at least by modern techniques—has not been done. According to the FDA, we have a lot to learn about the safety of sunscreen, from the amount absorbed into our bodies to how long it stays in our bodies to whether there are other adverse consequences as claimed by some, such as affecting our endocrine and reproductive systems.

The current saga began last February when the FDA issued what is called a proposed rule, which was a bit of a shocker to people like me: they outlined a number of concerns about sunscreen absorption and safety. They basically said that if sunscreen absorption into the body was a very small amount that we didn’t need to be concerned.  However, if the amount was above a certain level (0.5 ng/ml), then we needed to know more detailed information about the safety of sunscreen. And, they said, we would have a final rule indicating what safety tests had to be done by November 2019.

There followed an article in the medical journal JAMA where the FDA reported research on four sunscreen ingredients, and guess what? They all were absorbed into the body and exceeded that minimal amount of absorption, adding fuel to the fire that perhaps we didn’t have as complete an understanding of sunscreens as we thought.

Now we have another study from the FDA, reporting on some of the same sunscreen ingredients, and adding a couple more. In addition, the researchers put the ingredients into several applications, including lotion, and various types of sprays (aerosol, non-aerosol, and pump). The researchers then did a careful examination in 48 volunteers of how much sunscreen was absorbed, how high the blood levels were, how long the sunscreen ingredient lasted in the blood, as well as how much stayed on the skin after application for how many days.

In this study conducted in a clinical pharmacology unit and examining sunscreen application among health participants, all 6 of the tested active ingredients administered in 4 different sunscreen formulations were systemically absorbed and had plasma concentrations that surpassed the FDA threshold for potentially waiving some of the additional safety studies for sunscreens. These findings do not indicate that individuals should refrain from the use of sunscreen.

In an editorial that accompanied the research article, Drs. Adewole Adamson and Kanade Shinkai provided a balanced perspective on what is becoming a difficult question to answer:

“It is critical to recognize that these two studies conducted by the FDA do not provide any evidence that chemical sunscreens cause harm. However, the current study does provide important additional information documenting systemic absorption of commonly available chemical sunscreen filters and strengthens the need for current FDA efforts recommending safety testing for certain chemical sunscreen ingredients to confirm they are generally recognized as safe and effective.”

They go on to write:

Because good evidence indicates that UV exposure is a key modifiable cause of skin cancer and melanoma, sunscreen should continue to be an essential part of UV safety, which includes photoprotective clothing, eyewear, and avoidance of intense sun exposure. In the absence of clear data demonstrating harm, the use of chemical sunscreen may still be considered appropriate, the use of mineral-based sunscreen is a well-established safe alternative. Elevating the science of the benefits and harms of sunscreen should be a priority. The sunscreen industry must begin conducting these safety studies as recommended by the FDA. Until then, the harms of absorption of sunscreen filters will remain uncertain.

First, we need to realize there are alternatives: as noted, mineral sunscreens are considered safe and effective. They just don’t look too pretty. Second, we need to take the editorial’s advice to heart: There are other ways to stay safe in the sun. You can find recommendations on the American Cancer Society’s website, and don’t forget the message of Slip Slop Slap and Wrap: Slip on a sun-protective long sleeve shirt, slop on the sunscreen, slap on a wide-brimmed hat, and wrap on a pair of UV protective sunglasses—just like I do when I go to the beach. Avoid the sun at peak hours, seek shade, and of course, avoid artificial tanning beds.

We will work our way through this. We need solutions, and we need the FDA and the sunscreen industry to come together and give us the information we need. Uncertainty has huge risks, since some will inevitably take this indecision as an excuse to avoid sun-safe behaviors altogether.

However, don’t forget that the risk of skin cancer—especially melanoma—is very real. And not being safe in the sun is avoiding the reality that skin cancer can be a deadly disease. 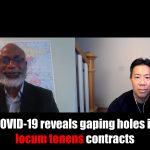 What is anti-racist medical education?

Sunscreens: The balancing act between safety and cancer prevention
2 comments