Last November, our medical school’s community faced a devastating loss, as second-year student R took her own life. As she was rushed to our hospital’s emergency room, some of R’s classmates, as well as her physician mentor, were on rotation and bared witness to her getting rolled in. Understandably, the loss of R cut deeply. While not often discussed, medical student suicide has been no stranger to medical schools both in the area and throughout the country.

A few days later, I attended the student-run memorial service and witnessed the tears, hugging, and sadness shared by many. But to be quite honest, I had never met R. I continually racked my brain, trying to figure out whether I even walked past her at school and came up with nothing. I read countless posts on social media, trying to gain a glimpse of what R was like, mostly because I was trying to fully appreciate the magnitude of the loss we had been faced with.

Many of her close friends admitted they had no idea R had been struggling mentally. And it made me wonder, was there really no warning sign? To me, that was unfathomable. Somewhere in the back of my mind, I concluded they just weren’t close enough to her. I thought of my own friends and selfishly grew thankful that no one I knew could even possibly do something like this. Throughout the school year, I had been keeping up with my inner circle regularly. Keeping R in mind, I checked in even more with my medical school friends and asked them how they were really feeling under the stress they faced. Everyone seemed to be plugging along just fine and adjusting well to the rigors of medical school.

What I quickly learned, however, was that as nicely as that blanket of reassurance can cover you, it can be torn off and ripped to shreds just as quickly. Two weeks before beginning my M2 year this August, I received a call that one of my closest undergraduate friends, N, was discovered by his father after he had taken his own life.

The pain I felt was unparalleled to anything I had ever experienced. It just didn’t make sense. I couldn’t even come up with a single warning sign if I tried; and believe me, I’ve been trying. N was one of the smartest people I ever met. He had a single week left in his pre-clinical year at his medical school. When I had known him, he never once admitted an ounce of struggle, whether it be through our undergraduate neuroscience classes or our shared research lab. The week before he took his own life, we spoke on the phone about his continued dreams of becoming a surgeon, his new lease starting up, his plans to join a friend for dinner later that day, and his pending research publications. He and I shared similar calls throughout this past summer, as we did during previous summers spent in different states. Nothing was different in his behavior, his tone, or even his tendency to recall a memory we’d both giggle over. Everything. Seemed. Normal.

I’m here to plead that everyone check in on their classmates, colleagues, and friends, even when they say they are doing fine. And even more than that, check in with yourself. While I still have no idea the internal battles N had been facing, I know sentiments of isolation, inadequacy, competition, and failure are no strangers to the medical training process.

In the note that N left for his friends and family, he admitted he began feeling suicidal at just nine years old. He lived completely alone with those thoughts for fourteen whole years. And that absolutely tears me apart. If you are currently struggling, you don’t need to weather this storm all by yourself. Confide in a friend, speak to a counselor. Diving into the realm of personal wellness, try a new cooking recipe, discover meditation, invest in a coloring book, download a free trial for a fitness app, do what you can to become more in-tune with your own thoughts. I hope that this conversation continues beyond the confines of this page — so far that one day, it may even save a life.

A journey from security guard to nurse, and why nurses don't get the credit they deserve [PODCAST] 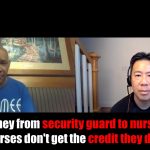