I read with fascination the opinion piece published New York Times:'” But I Saw It on Facebook’: Hoaxes are Making Doctors’ Jobs Harder” because it’s a topic that’s been on my mind lately.  Particularly after I engaged in a Facebook exchange with close friends who were forwarding misinformation from the less than reputable “American Frontline Doctors” about COVID-19.  The American Frontline Doctors group was more interested in getting their faces in front of a camera then they were genuinely interested in public health, in my opinion, but a good example of the kind of misinformation that rapidly circulates on social media.

My Facebook feed used to be dominated by friends sharing photos of their travel adventures, cute pet videos, and holistic expressions of wellness.  Since COVID, that’s changed dramatically.  Now people of both sides of the political divide use it to disseminate information that conforms to their leanings.

I work in an emergency room, so COVID-19 misinformation is a topic that expressly interests me. I’ve long been fascinated by how people come to the beliefs they do.  I ponder why I have the inclinations I do. I’m curious why people who are entrenched in their beliefs rigidly adhere to them even when presented with contradictory objective truths.

The authors of the New York Times opinion piece contend, “without the support of social platforms, our efforts to stamp out viral misinformation feel futile.”  They claim in the title, “Hoaxes are making doctor’s jobs harder.”  Now it certainly doesn’t help that the leader of the free world sets the example of putting blind faith in a disproven treatment for COVID, namely hydroxychloroquine.  It most certainly invigorates conspiracy theorists.

But my question is: Are Facebook “hoaxes” making doctor’s jobs harder?  I mean, compared to what? This is an unprecedented time.  Not only have we not seen a pandemic like this since 1918, but we’ve also never experienced the evolution of social media during a pandemic.  Most people don’t objectively evaluate information for its validity, weigh additional data, and then compare strengths and weaknesses, i.e., take a scientific approach to decision making in drawing conclusions in the first place—a failure of our education system. Most people come to their beliefs for reasons completely remote from objectivity.  Then they find information that conforms to those beliefs.

I have no data to support this contention because we’ve never experienced social media before during a pandemic, but maybe Facebook isn’t making a doctor’s job harder.  In other words, I take a broader view. Who’s to say people wouldn’t be just as entrenched in false beliefs without social media? Maybe they would find information to support their beliefs in other places.

But social media is putting on full display how people perpetuate misinformation and how they cling to those beliefs even when presented with contradictory scientific valid data.  I think in the end, social media will be a good thing for helping to understand the emotions and psychology that lead people to cling to these fallacies. It’s an open laboratory in a sense, and maybe in the end, we will develop effective tools to help people get to cognitive dissonance sooner, a critical step in getting an individual to open their mind to new information.

Mark Tosca is an emergency physician.

Accountability on the frontlines

Recognizing childhood stress is so important. Here's why. [PODCAST] 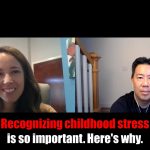