It is hard to imagine an age in which assisted reproductive technology (ART) did not exist. The CDC reported that 1.7 percent of U.S. births in 2017 were attributable to ART, with approximately 285,000 ART cycles reported that year. In reality, the process is not as straightforward as it may seem on paper.

As a radiologist, I was involved peripherally with patients struggling to conceive during training. In my residency program, radiologists sometimes performed tests to assess pelvic anatomy. When the testing was unrevealing, patients would often become even more distraught because a cause for the infertility remained elusive. This is no longer part of my practice, but these patient encounters were the most emotional throughout my training.

The mental turmoil associated with infertility is not often written about. One of my best friends, Dr. K., underwent ART several years ago after experiencing difficulty conceiving. After rounds of procedures, ovarian stimulation became necessary.

Hormonal supplementation had considerable side effects, including mood alterations and pelvic discomfort, but it also became clear that the online community of ART participants sometimes revealed an odd subculture of frustrated yet competitive individuals who could be less than supportive. The last thing an exasperated patient needs is to be told that her hormone levels may not be high enough to achieve success. Also notable are the considerable expenses, which may cost tens of thousands of dollars, and there is no guarantee of conception.

Several years later, Dr. K. now has two beautiful children and is instead faced with the difficult decision of how to best educate her kids in the midst of a pandemic on top of handling the harsh stressors that come with working in the hospital in these hard times. She wanted to be a mother more than anyone I have ever met, and now she is.

What is perhaps most remarkable about our friendship is that we met when she was the intern supervising me as a medical student many years ago. While most physicians forget the people they train with, the special ones remember the doctors they impacted during training. I guess that is what makes her a great doctor in the first place, and that is what makes her a great mother as well. The struggles of ART proved to be fruitful for her, and I hope that others can see her outcome as an inspirational tale. It turns out that good things happen to good people.

COVID-19 is rattling the nerves of preemie parents [PODCAST] 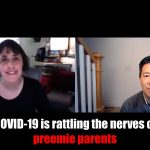