It’s winter in Oxford, and I’m biking to the John Radcliffe Hospital, the flagship medical center of England’s National Health Service. It’s raining, and the chain on my bike keeps slipping off the gear. “Figures — I shouldn’t have bought a bike from an antique shop.” Back in December, my school had offered to send me across the pond to immerse myself in the British health care system. Seeing as I was nearing the end of medical school, I jumped on the opportunity to travel abroad. I’d known bits and pieces about the NHS before my trip—mainly that it had long waitlists and low salaries. As such, little did I expect that my time in England, as part of the NHS, would fundamentally alter my perspective of health care back in the States.

The seeds of England’s health care system were planted during World War II. During the War, England developed a centralized health care workforce, the Emergency Hospital Service (EHS), to provide for injured soldiers returning from the frontlines. Once the war was over, soldiers still required access to health care as a consequence of their injuries. Yet, given the devastated infrastructure and economic downturn after the war’s end, these soldiers weren’t able to afford proper medical care. This laid the foundation for the passage of the National Health Service Act of 1946, which contained three core principles for the NHS: “… that it meets the needs of everyone, that it be free at the point of delivery, and that it be based on clinical need, not ability to pay.” In short, universal health care.

Finally, I made it to the hospital. I walked the rest of the way after dropping my bike off at a repair shop. I was on stroke service this week and still in the process of learning the etiquette of working in an English hospital— no white coats allowed, sleeves rolled up past the elbows, supervising doctors were called ‘consultants’ instead of ‘attendings,’ and tea was promptly served, for patients and staff, in the afternoon. I was following a lady who’d suffered a stroke while knitting a scarf. She’d been waiting for an echocardiogram to evaluate whether a shunt in her heart led to the stroke. It was a routine imaging study that took a couple of hours to complete back in the states. Here I was seeing patients wait a day or more to receive the same study. This was true for many lab tests and imaging studies— unacceptable wait times relative to the U.S. And yet, patients didn’t seem to mind. In truth, they actually seemed to welcome it.

After I told my stroke patient about the delay in her echocardiogram, she replied, in a slurred Yorkshire accent, “That’s OK, other people need it more than I do.” The more time I spent in the hospital, the more I came to recognize that this sense of altruism seemed to infuse itself into every aspect of its day-to-day life. Patients were willing to brush off inconveniences due to their recognition that resources were limited, and allocation must be prioritized based on need. This sentiment wasn’t isolated to patients but pervaded students, physicians, and general staff. My didactic sessions with students were spent discussing drug pricing along with physiology. My attending physician challenged us to minimize patient workups so as to optimize resource utilization. Even restrooms had signs over the sinks, stating: “Please limit paper towel use to reduce costs on the NHS.” There was a strong sense that my actions affected a larger whole, and as a consequence, I held responsibility towards the well-being of the hospital. Indeed, the more time I spent within the NHS, the more I recognized that its principles didn’t just improve hospitals, they seemed to contribute to a larger sense of community within the nation.

The concept of universal health care has been a constant topic of discussion in the United States for a long time now. “What will happen to wait-times? How will the government pay for it?” In general, most policymakers believe wider access to health care will be an economic positive for the country as a large initial influx of government spending will result in a more sustainable health care system in the long-run. Modeling on this is extensive and robust, and yet, the data doesn’t seem to cut it when appealing to our unique political tradition. Instead, my appeal for universal health care comes from a conviction that it can contribute to the overall civic well-being of our nation. More than its economic or public health benefits, universal health care has the potential to bring our country together. The vital ingredient in the health of any nation is the recognition that its citizens are, in some deep way, intimately connected. Abstract concepts of altruism, social conscience, and duty become pressing realities when individuals understand that their personal sacrifices have a larger meaning. This is why, in survey after survey, Britons consider the NHS to be their country’s proudest achievement.

My stroke patient was being discharged after receiving her echocardiogram. I provided her with a refill of medications (at no cost) and a referral to a neurologist for follow-up. My shift was over, and I was on my way out of the hospital when I saw my attending leaving. I caught up and told her that our stroke patient had just left.

I replied, “Yes, it is. Thank you again for orienting me to the neurology service.”

“No problem, health care in the U.S. is much different than it is in England.”

I grinned, “Yeah, it definitely is.” We exited the building.

“I’m sure you’ve learned quite a bit here,” We were walking towards the bike racks. “But I hope you’ve understood that the NHS, more than any other institution, unites us.” The oppressive winter clouds had finally cleared as we waved goodbye. I mounted my bike, now fully repaired, and rode home through a warm spring mist.

I am tired. But I still love emergency medicine. 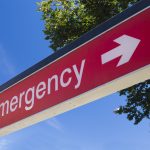