I never have a problem going to sleep. In fact, after I work a night shift, I easily go into a semi-coma. But tonight is different. 2 days off from work, with a regular sleep schedule at night, but my mind is twirling. I can’t sleep.

So at 3 a.m., I took a shower. Took an ibuprofen with some ginger ale. And I started to drift back to Catholic elementary school. We were 7th graders. I was in a group that did a “hip” musical mass with us kids playing drums, guitars and cymbals and tambourines. We were cool.

I wanted to play the Beatles song “Let It Be.”

“Mother Mary comes to me, speaking words of wisdom, Let it be.”

I thought the song was about the Mother Mary. You know, Jesus’s mother. It was actually about Paul McCartney’s mother, Mary. A tribute to her.

But the kids voted me down. They said the song was sacrilegious. And I never got to play it at the guitar mass.

Fast forward. When my kids were little, we joined a Presbyterian church. I taught 3rd and 4th graders bible school on Wednesday nights. I loved it. We had decided to put a concert on with music and skits for our congregation and for the public. All donations would go to a local soup kitchen.

Since I was the director/producer of this awesome show, I got to pick and choose. Of course, the children had a say of what they wanted too. So with cymbals and guitars and drums and tambourines in hand, we put on the grandest show. “This little light of mine,” “Kumbaya, my Lord,” “I can only imagine,” and other social awareness skits were played out.

And now it was my turn.

I propped myself on the stool. My cherished guitar in hand and strummed out the song I was forbidden to play 30 years ago.

Tonight, my memories of such an awesome, meaningful event came back to me.

We are living in a harsh, sad, and tragic world filled with turmoil. But the words are profound and comforting.

“When I find myself in times of trouble, Mother Mary comes to me, speaking words of wisdom, Let it be, let it be.

And when the broken-hearted people living in the world agree, there will be an answer. Let it be.”

We collected over $200 that night and handed it over to the minister in charge of the soup kitchen.

That was a special night. I hope I taught my 3rd and 4th graders something special. Like caring for one another. Love one another. Respect each other.

We sure could use this today. And always.

So I’m going to attempt to go to sleep again, and hope for a better tomorrow. A kinder tomorrow.

There will be an answer.

What can residents do to prepare for hospital closings? 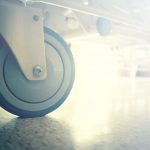 A medical student’s experience at an urban free clinic