When my son was in third grade, his class took a field trip to the Spanish Military Hospital Museum in St. Augustine, Florida. This was a military facility that operated in the late 18th century. It operated at a time when St. Augustine changed hands from Spain to England and then back to Spain. The museum provides tours that recreate the bygone hospital practices. Actors put on a full surgical demonstration of early procedures from that era. There is also an apothecary demonstration discussing the medicines that were available for treatment at the time, and there is a tour of the medicinal herb gardens.

As we arrived, the kids quickly packed into the tiny building and eagerly sat on the floor. The first presentation was given by an actor playing a Spanish physician who asked for a volunteer from the audience to be his first patient. This surgeon then gave a vividly horrific description of how he would treat this patient’s battle wounds. He described how he would carry out an amputation of an extremity in painstaking detail using a prehistoric collection of surgical artifacts. The kids learned where the term “bite the bullet” came from. The doctor also discussed procedures such as tooth extraction and bloodletting. They described how they cared for people with Cholera, Influenza, and Yellow Fever. As we heard about these treatments, we were riveted. We giggled as we shuddered.

During the tour, it was explained that the Spanish doctors were highly educated when compared to the English, who depended on the town barber for surgery because he was the only one with sharp tools. Spanish medicine also was novel at the time because it involved infection control measures and preventative medicine. Their hospitals had better outcomes because they kept sick patients quarantined.

Even though the tour pointed out thought that these medical practices were gruesome, they were the best that their society had at the time. They were even above the local standard of care.

In reminiscing about this primitive medicine, I began to wonder if, in the distant future, people may look back at our medical practices in dealing with COVID-19 in this type of disturbing context. The novel Coronavirus has presented us with so many unknowns.  Early on, it was incorrectly compared to influenza. Scientists then argued the main route of transmission for months. There were many heated debates on what type of personal protective equipment was adequate. Then, there was a controversy regarding if pre-symptomatic or asymptomatic people are contagious. There were also disputes regarding if children could transmit the virus.

Furthermore, although COVID-19 was originally thought to be a respiratory virus, it is now known to invade our endothelial cells and have severe cardiovascular complications. Treatment approaches have also been incredibly controversial. Just as the 18th-century physicians and apothecaries experimented with numerous herbal compounds to fight unique diseases in their time, modern scientists have been throwing the pharmaceutical kitchen sink at COVID-19 of late.

I cannot help but compare our current scientific challenges to those of the remote past. COVID-19 was an entirely novel virus that had never existed before, and it presented countless new challenging unknowns. Thankfully, great strides have been made in research, treatment, and vaccine development in the past six months.  Nevertheless, I think that in a couple of hundred years, people will look back at this point in history and contemplate our choices.

Physicians of America, unite! You don’t have to work for hospitals.

How medical students can contribute during the pandemic [PODCAST] 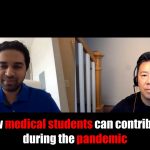