“The good thing about science is that it’s true whether or not you believe in it.”
– Neil deGrasse Tyson.

Gov. Andrew Cuomo believes that New York has vanquished the virus by good policy. Never mind that New York’s mortality numbers total to the worst in the United States. Being smashed very early by the wide and wild spread of COVID-19 since early February, by the time the lockdown occurred well over a million people in New York City were likely already infected – as accurate serology testing verified. Cuomo himself agreed that 21 percent of New York City’s population was infected. New York’s and Sweden’s (no lockdown, fewer deaths, same population) curves are classic Farr curves: observed in the late 19th century before any meaningful solutions to pandemics were available. Dr. Farr’s sober quote: “The death rate is a fact; anything beyond this is an inference.”

A July 21, 2020 article in the venerable and politically correct British medical journal Lancet, analyzed the impact of public policy and other factors on dozens of countries’ COVID-19 mortality statistics. A key finding: “Rapid border closures, full lockdowns, and wide-spread testing were not associated with COVID-19 mortality per million people. ”

When looking at the curves of current hot spots like California, the post- reopening statistics look much like the earlier ones of NYC:  the Farr curve is close to or just past peaking.   Mask wearing and social distancing are good, hand washing should be a fact of everyday life, and all would have been excellent if instituted early, but science learns from past mistakes, unlike politics or religion.

Science is still learning about herd immunity with COVID. Orthodox (note the religious connotation) estimates of COVID herd immunity tend to be simplistic.  They rest on the math of how many people, on average, a single individual can infect – the “R0″ The formula 1-1/R0 calculates the level of herd immunity to stop infection’s acceleration, deflection downward, and eventual burnout.  The R0 varies from place to place depending on density, but also on factors of biology and innate immunity. We are born and become biologically different; also, our personal innate immunity includes T-cells. These cells have recently been shown to cross-react to COVID-19 based, presumably, on prior exposure to more benign coronaviruses all school kids wallow in.  This perhaps explains the low rate and severity of childhood COVID-19 and very few deaths (fewer than 40 in the U.S. as of this writing, 0 in many states including California) in those under 17.

Orthodox dogma on herd immunity rests on calculating vaccine campaigns. For COVID-19, it was assumed 60 percent would need vaccinating (antibodies) to reach herd immunity.  That math is mostly based on everyone being equally susceptible to contracting the disease.  Why did only 18 percent of the Diamond Princess occupants (mostly seniors) who stayed on that ship for two months get infected? In a naturally spreading infection, the wide heterogeneity of susceptibility to infection lowers the threshold for herd immunity.  Initially, the most susceptible people get infected, explaining the early estimates for COVID-19 R0 to have been 2.5. It gets harder as the infection spreads to less susceptible individuals; it has fallen considerably since the first days of COVID-19.  Biological heterogeneity plays a big role.  Recent studies suggest the threshold depending on the region may be as low as 20 to 30 percent, below even NYC numbers.

The final analysis will need to be retrospective,  But keep an eye on your local region’s confirmed positive case numbers, apply a 10 to 24 multiplier per the CDC’s and a July 21 JAMA’s estimates of unconfirmed to confirmed infection ratio, then divide by that region’s population numbers.   If your region’s resulting percentage is in the 20 to 40 percent range, and your hospitalization and death curves are headed down, your inference will be just as accurate as anyone else for now in determining when herd immunity threshold was reached where you live. We will likely reach that threshold in many regions well before the vaccine is fully deployed.  The deaths accrued will be tragic, as is life in the final analysis. Policy cannot harness nature in most cases, only science can, as it learns and adapts faster than politicians do.

After all, the good thing about science is that it is true at any given point in time, and when scientifically proven wrong, it usually corrects itself. We need to believe in it.

Michael Brant-Zawadzki is a senior physician executive, and endowed chair, Pickup Family Neurosciences Institute, Hoag Hospital, Newport Beach, CA. The author’s opinions are his own and do not reflect those of his employer. 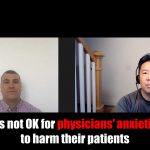