An excerpt from This Is Your Brain on Food: An Indispensable Guide to the Surprising Foods that Fight Depression, Anxiety, PTSD, OCD, ADHD, and More.

Suzy was a bright and hardworking student. However, even though she was conscientious and generally cheery, her grades began to fall during her senior year, and she started to feel depressed. She also constantly had an upset stomach, which she had just accepted as a way of life. She’d had an ADHD diagnosis since she was younger, but while Ritalin had helped her focus on her work in the past, the effect seemed to be dwindling as she built up a tolerance.

I noted that her diet seemed to have shifted toward more comfort food. Her meals were cereal with milk, a sandwich, pizza, or pasta. She was eating a lot of dairy and gluten, and it’s no coincidence that both of these dietary components can exacerbate the symptoms of ADHD.

There is also a well-established link between ADHD and gluten intolerance or celiac disease. In 2006, Helmut Niederhofer and Klaus Pittschieler assessed a sample of people across a broad age range to test the association between ADHD and celiac disease. The participants’ ADHD symptoms were measured before they started a gluten-free diet, and six months after. The study found that people who had celiac disease were more likely to have ADHD, and a gluten-free diet improved their symptoms after the initial six-month period. Suzy’s celiac test came back negative, but you don’t have to have celiac disease to be sensitive to gluten. This condition is called nonceliac gluten sensitivity.

They found that adolescent celiac disease patients had significantly lower tryptophan concentrations in their blood. Three months after patients started a gluten-free diet, the researchers found a significant decrease in patients’ psychiatric symptoms compared to their baseline condition, coinciding with significantly decreased celiac disease activity and prolactin levels and with a significant increase in L-tyrosine, L-tryptophan, and other amino acids known to be precursors of brain chemicals such as serotonin.

The authors concluded that it was possible that behavioral problems, such as those that occur with ADHD, may in part be due to certain important precursor amino acids not being available until people stopped eating gluten. In certain individuals, gluten-free diets can help the body increase levels of the precursors to make serotonin, which is one neurotransmitter involved in ADHD.

I encouraged Suzy to go on a gluten-free diet, and with careful dietary adjustments she gained better control over her symptoms.

Suzy’s diet was also high in dairy. Eating a lot of dairy means you eat a lot of casein, which may worsen ADHD. Casein is the main protein found in dairy products such as milk, cheese, yogurt, and ice cream, but it can be a factor even in foods that are thought of as dairy substitutes, like nondairy creamer and margarine.

Not all casein is the same. The main form is called beta-casein, of which there are two major types, A1 and A2. Most regular milk contains both types, but research suggests that A1 proteins may be harmful to the gut in ways that A2 proteins are not.

In 2016, a team led by Sun Jianqin studied forty-five participants who consumed milk containing both A1 and A2 milk proteins, and then milk containing only A2 protein. The researchers found that when subjects drank milk containing A1 protein, they had more gastrointestinal inflammation, their thinking was slower, and they made more errors on an information-processing test.

Although more research is underway about whether A1 milk causes any adverse effects except occasional digestive problems, it’s clear that sufferers of ADHD should be cautious about the kind of casein they consume.

There are now A2-only milks available in many grocery stores and online. While it’s great to have A2 protein milk available, since much of the dairy we consume is in the form of cheese, yogurt, butter, and prepared foods, cutting out A1 caseins still requires significant dietary changes. It’s worth noting that sheep’s and goats’ milk is generally A2 milk, which makes cheese and yogurt choices a bit easier. You can also try nut milks and milk nut yogurts as a way to avoid casein.

You’ve probably heard that sugar makes people (especially children) “hyper.” That’s created a common perception that sugar causes or triggers ADHD. It’s true that sugar can have an effect on ADHD through several pathways. Sugar reduces dopamine sensitivity in the brain and can amplify impulsive reward-seeking behavior that is common in ADHD. Still, while many parents and teachers swear by limiting kids’ sugar intake to improve their behavior, recent research indicates that the idea that sugar causes ADHD is a misperception.

In 2019, Bianca Del- Ponte and her colleagues investigated whether high sugar intake was associated with ADHD in a study of children between the ages of six and eleven years old. Through interviews and diet monitoring, the researchers were able to calculate the actual sucrose consumption of all the children in the study. Trained interviewers collected data on whether children met the criteria for ADHD or not.

Although they found that high sucrose consumption was more common in six-year-old boys with ADHD compared to those without ADHD, this effect was not seen in children of other ages in either gender. Changing sucrose consumption between six and eleven years of age also did not affect the incidence of ADHD in boys or girls. Overall, the researchers concluded that sugar consumption does not lead to ADHD. If there is any correlation, children with ADHD may simply consume more sugar.

Although there are other studies that have demonstrated that sugar consumption (especially sugar-sweetened beverages) is associated with ADHD, a large majority of recent studies back up the idea that sugar does not cause ADHD. Still, while the evidence of sugar’s role in hyperactivity may not be as damning as popular perception would indicate, sugar is never good for mental or physical health, so I always recommend that ADHD patients of all ages limit how much they eat.

As a new school year begins, what better time for medical professionals to look at the role of gluten, dairy, and sugar in worsening ADHD?

Uma Naidoo is a nutritional psychiatrist and author of This Is Your Brain on Food: An Indispensable Guide to the Surprising Foods that Fight Depression, Anxiety, PTSD, OCD, ADHD, and More. She can be reached at UmaNaidooMD.com and on LinkedIn, Facebook, Instagram, and Twitter @DrUmaNaidoo.

An ode to hospital cafeterias 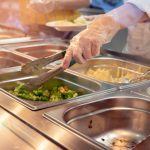