I had to earn my “stripes” in ICU. After I graduated from nursing school, the “big” hospitals wouldn’t take me into the ICU, as I had no experience as an ICU nurse. Back in the early 1980s, there was no such thing as an internship program.

I desperately wanted to become an ICU nurse. So a small-town county hospital took me in. It was a six-bed “ICU,” and I slowly learned the basics of ICU nursing. The county hospital sent me on a 60-hour hemodynamics class, which opened up my eyes even more! After one year at this hospital, I was ready to spread my wings.

I applied to the big hospital, big city ICU. And they took me in. The orientation was four weeks. 16 beds. Ventilators, EKG monitors, nurses in light blue scrubs, code blue’s, computers. I was in awe.

But there was one ICU nurse who I instinctively knew I must gravitate towards.

Carolyn. She had a “glow” about her. She had wisdom and knowledge. She was calm but a strong force. She was kind but direct. She explained arrhythmias and irregular EKGs to me. But she taught me with kindness and patience. She was never condescending. Never a bully. Never a “know it all.”

I knew that “when I grew up,” I wanted to be just like her if possible. I adored Carolyn. I loved her dry wit, her intelligence, her spunk. She gladly took us young ones under her wing.

When she clocked out, she had a whole other life. A loving wife and mother to several children, she was the neighborhood mom too.
I’ll never understand how she had so much energy. Her plate was full.

She did finally retire and consumed her time with her family and her grandbabies she adored.

Sadly, we received the news the other day. Her husband tried to wake her up. She was unresponsive. Medics rushed her into the emergency department. She coded several times. She never made it to the ICU. This time as a patient.

There are frequent tears in my eyes. Even writing this. She was the epitome of an ICU nurse. Her intelligence surpassed many. But she was the quiet storm in a chaotic ICU.

Though Carolyn had a heart of gold, her physical heart had taken its toll.

You will always be my hero. My shining star.

Sing with the angels Carolyn, because you were certainly an angel here on earth.

The next time you're on call, please rethink what white and black clouds mean 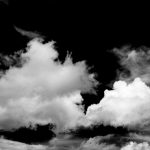