It was April 5, 2020. In the months prior, I imagined, she had been grappling with the isolation of her newfound unemployment.  The pandemic’s solidarity was possibly a relief: the rare solace of the permission to take a pause.  Her new days were partly spent with long walks near Baker Beach, saluted by the loyal, majestic Golden Gate, the cool San Francisco sun embracing her and her high-spirited two-year-old son. Nearby, rainbows of tulips dappled grassy fields, and perfect sun rays streamed through the California redwoods, a beauty so typical of the area.

We had been playing the proverbial phone tag between two coasts.  Missed calls took the form of “hey how’s it going” texts, elongated voicemails with humored venting, and exchanged pictures of our everyday happenings.  As COVID loomed across the country, our lives and responsibilities were different. I began to fear for my patients’ lives in New York City, for my elderly parents in the Bay Area, and for the consequences of having to halt my fertility treatments. Meanwhile, partly due to necessity and partly to her enjoyment, she cradled the full-time art of motherhood. It was the longest we had gone in our 20-year friendship without directly speaking.

Overnight, sometime between a jovial Saturday evening family Zoom call and an anticipated Sunday morning breakfast, her heart stopped.  100 percent blockage of her proximal left anterior descending artery, they said. Medical school had taught me that blockage of this artery was the classic “widow-maker,” and rarely thought to be a “widower-maker.”

So rare in fact, the idea of a cardiac arrest in a female in her 30s was not considered, and even less so in the panic of the pandemic. At first, when she woke up from sleep strained for air, the paramedics surely thought her symptoms were “just COVID.” She was treated cautiously, with no medical workup, and taken to a hospital with ironically only a few COVID cases. She was secured in an isolated emergency department room — no guests permitted — left alone to the sounds of her own slow gasps and uncomfortable bouts of nausea. Her only lifeline seemed to be her sister, a physician, who was a phone call and an hour away. She vomited, felt misleadingly better, but as pain crushed her chest and classically radiated to her back and down her left arm, she called her sister back in terror.

With steel strength and sheer will, she somehow stumbled to the nurses’ station, as nutrients and oxygen stopped flowing to her most vital organs. She collapsed on the cold ED ground, finally, finally, finally getting the attention of medical staff, now credulous. Forty-five to ninety minutes of desperate CPR ensued, I was told.

By this time, New York was swimming in COVID. At my hospital, the sights of people piled in the ED, heaving for air, breaths away from intubation, had become familiar visuals; for survival, as many physicians did, I numbingly focused on the tasks of patient care.

I got the text from her husband during morning rounds: She had a massive heart attack an hour ago. Shocked out of my numbness, I excused myself, pain searing my chest, to call him. Words blurred, and news shattered. “They are rushing to put her on something called ECMO.” ECMO? I screamed silently, equating this life-sustaining machine with ultimate death. “I’m here with you,” I said bravely. Decades of friendship and rainbows of memories flooded my mind, tormented by the prospect of life without her; tormented by her present-day image, body fighting on ECMO and breathing by a ventilator, a now hauntingly inevitable fate.

Only a miracle could turn this around, we said.

In the deliberated weeks that followed, waiting took agency in fervent texts, get-well-soon videos, prayers, Zoom, GrubHub gift cards, fresh meals, care packages, candlelight yoga. GoFundMe triumphantly raised tens of thousands of dollars overnight, to help where no help could be given. In silence, we waited, sometimes eagerly and often helplessly, mulling on every update. She’s had multiple strokes. She opened her eyes once today. She spiked another fever. She’s getting a tracheostomy. She may never regain neurological function. She’s being transferred to a new hospital. No, she cannot have visitors.

On May 1, I tested positive for COVID; the suspense of waiting for her prognosis became a definitive intermission. My thoughts forcibly migrated inward, while my body fearfully battled the virus of the pandemic. Body aches rendered into a relentless fever, aching to the bones, unshakable chills, and leaden bedbound fatigue. In my quarantine and my illness, I wept for my deceased COVID patients, for our ED doctor who tragically died by suicide, for my friend, an indirect casualty of the pandemic. As I lay prone to offset my wheezy, precariously shallow abdominal breaths, I wondered: Would my husband get ill? Would my lungs deteriorate irreversibly? Was I forming ominous clots? Could the virus ruin my reproductive organs, still aching to bear a child? Would my insides ever be the same; would she ever be the same?

It was May 27. My fever had broken, aches subsided, breathing eased. Two days prior, George Floyd had been killed by asphyxiation, and the nation erupted through lockdown in fires of protest. Amidst it all, I still felt the desolate silence of her absence.

Then her number appeared on my phone. Exhaling, I accepted the FaceTime. There she sat, an unassuming symbol of mercy and victory.  A neck bandage sealed her previous tracheostomy; a tube dangled precariously from her nose, a telemonitor with a low battery beeped auspiciously. The strokes had impaired her vision.  But life was returned in her brilliant smile and characteristic laugh. On the hospital patio, adorned in a hospital gown, gently hugged by the Palo Alto sun, tulips speckled by her wheelchair, she squinted her tired eyes happily towards the phone, listening carefully to my voice.

Sujana Bhattacharyya is a family physician. 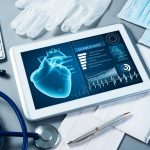 A screenwriting dermatologist shares the importance of creativity in medicine [PODCAST] 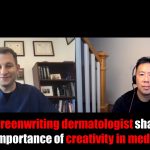