According to Dr. Anthony Fauci, the nation’s top infectious disease expert, a coronavirus vaccine could be ready for distribution within months.

“We feel cautiously optimistic that we will have a vaccine by the end of this year, and as we go into 2021,” he told lawmakers on July 31, adding, “the plans now allow for any American who needs a vaccine to get it within the year 2021.”

Researchers are working at breakneck speeds on more than 165 vaccines for COVID-19. At present, more than two dozen are in phases two or three of testing, which include human trials. Though early results look promising, a lot can still go wrong, such as:

Assuming a COVID-19 vaccine meets FDA and WHO benchmarks, which include such stipulations as “vaccine benefits outweigh safety risks,” the public still needs to be convinced to take the shot. That’s not a given.

In May, an Associated Press poll found less than 50% of Americans planned to take an approved and available COVID-19 vaccine, similar to the findings of a Pew Research Center poll conducted later that month.

The most recent numbers show patients and healthcare professionals are divided on the issue of when and if to get vaccinated. The opinion poll, made available to the 10,000-plus subscribers of Monthly Musings on American Healthcare, asked: “At what point would you feel comfortable getting vaccinated for COVID-19?” 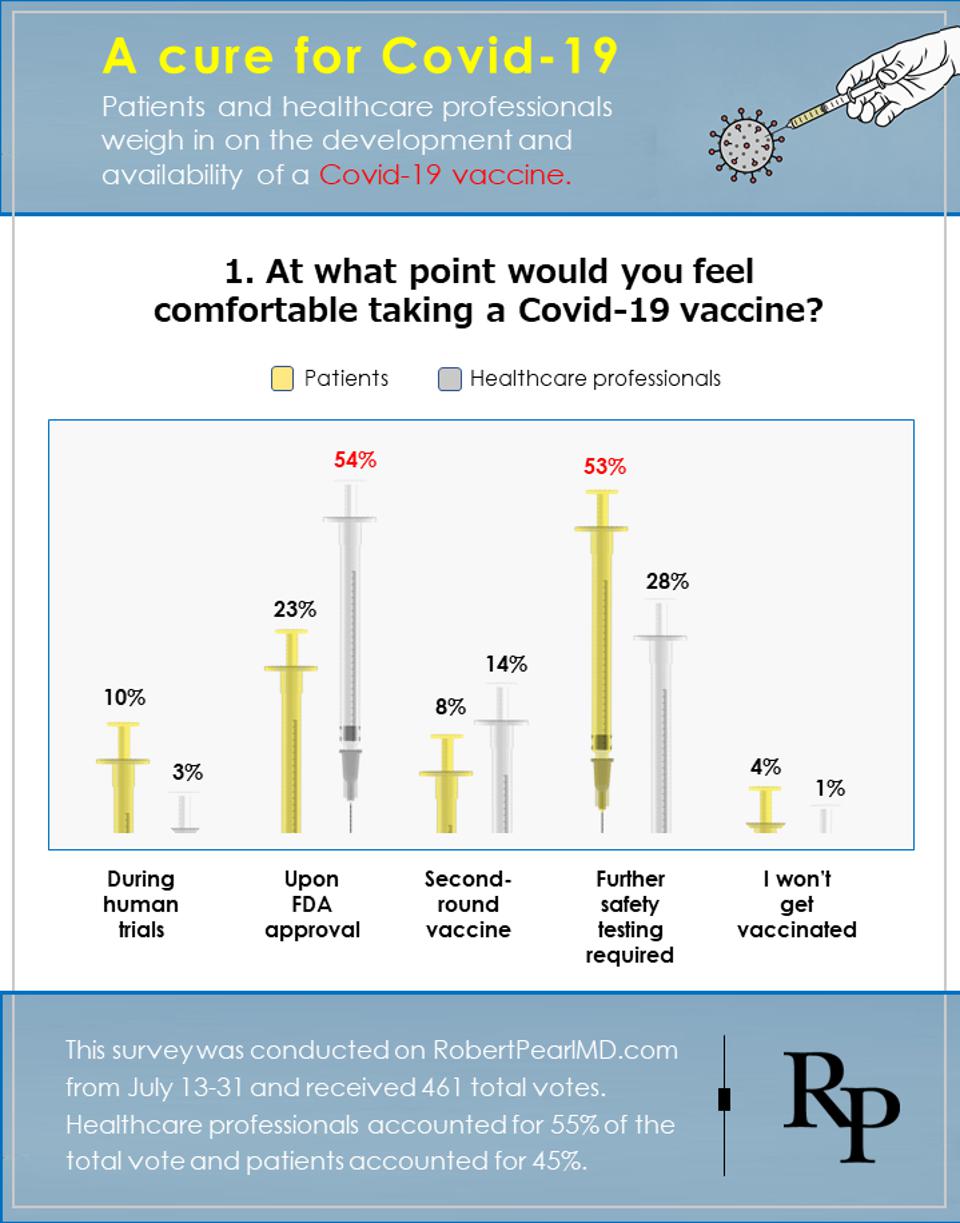 According to the results, more than half of people working in healthcare would be willing to get vaccinated upon FDA approval. In contrast, 61% of patients prefer to wait for more definitive proof of the vaccine’s safety and efficacy.

That would present a problem. To eliminate the virus, nearly all the U.S. population needs to be vaccinated or acquire antibodies through infection and recovery. Otherwise, the disease will simmer indefinitely.

So what about SARS-CoV-2, the virus causing the current pandemic? Results of a study published in Nature observed that antibody levels fall off just two to three months after infection. Likewise, a New England Journal of Medicine report last month noted antibody levels in COVID-19 survivors dropped rapidly within months. That same report suggested people who recover from the disease could be left without any antibodies within one year.

As scientists seek to better understand the immune status of people who recover from COVID-19, much remains unknown. Do lower antibody counts indicate the end of immunity? How will these antibodies respond when re-exposed to the virus, and are antibody levels higher in people who had a severe infection? Also, is a second illness from COVID-19 possible, or were past scares of reinfection merely the result of faulty antibody (serology) testing?

With so much confusion surrounding the immune status of people who’ve recovered from the infection itself, scientists fear there will be even less certainty concerning a vaccine’s true efficacy.

The U.S. government’s Operation Warp Speed, which launched in June, pledged $10 billion toward developing and delivering 300 million doses of a safe, effective COVID-19 vaccine by January 2021. The race is on, and some early leaders have drummed up significant media excitement over the possibility of bringing a vaccine to market in record time.

As I wrote in Forbes last month, Americans assume a cure will materialize from a combination of public urgency and heavy research funding. Few realize that the currently accepted timeline for a coronavirus vaccine is based more on medical optimism than scientific evidence.

Major drug companies like Pfizer, Moderna, and others vying to create a COVID-19 cure are relying on a method that has not produced a safe or effective mRNA vaccine against any viral infection in more than two decades of research.

4. The vaccine gets approved but might be only 50% effective

In the past, successfully developed vaccines used inactivated or attenuated (weakened) viruses and proved highly effective. For example, three doses of the polio vaccine are nearly 100 percent effective, while the vaccine for measles is 93 percent effective after just one dose (and 97%-plus after two doses), according to the CDC.

Many vaccines, however, aren’t designed to deliver lifelong protection at near-universal rates. For example, the CDC conducts studies each year about the effectiveness of the seasonal flu shot at protecting people against various strains. And because the flu virus mutates from year to year, statistics show the vaccine is between 40% to 60% effective at reducing the risk of flu-like illness.

That brings us to the novel coronavirus. In April, the WHO noted the ideal vaccine would establish immunity in at least 70 percent of the population, including the elderly. In July, an FDA official added, “We’re going to need a vaccine that’s probably in the order of 70% effective and 70%, at least, of the population is going to need to take it.” Meanwhile, Dr. Fauci is on the record as saying that he, too, would settle for a 70% to 75% effective vaccine.

But those are all “ideal” situations. =FDA guidance issued in June stated, “To ensure that a widely deployed COVID-19 vaccine is effective, the primary efficacy endpoint point estimate for a placebo-controlled efficacy trial should be at least 50%.”

This possibility leads to some disheartening mathematics. Assuming that only 50% of the population takes a vaccine that is only 50% effective, the nation’s immunization rate could be as low as 25%. That total would be insufficient to end the pandemic.

Achieving herd immunity, the point at which the virus would no longer spread, would require at least 70% of the country (200 million Americans) to either be vaccinated or acquire the virus and recover from it. Further, that estimate assumes long-lasting immunity from the virus.

For all that scientists don’t know about COVID-19 (the disease), they do know that the coronavirus (which causes the disease) has behaved predictably over the past six months—far more predictably than humans.

When people wear masks, physically distance, and wash their hands, the curve of infection either flattens or declines. When people gather indoors or in large groups without masks, cases rise exponentially.

In that respect, we’ve seen no major surprises out of the pathogen so far. But could that change, too?

Immunologists have observed that the virus has exhibited no major or concerning mutations since reaching U.S. shores. But, theoretically, it could. And a virus that mutates significantly over time could render an approved vaccine ineffective.

Also, what about our presently optimistic scenarios for vaccine trials? Though public health experts continue to push the narrative of having an FDA-approved vaccine by 2021, there’s an important number that goes continually overlooked: Four. As in four years, which is the fastest a successful vaccine has ever been developed (mumps). Nearly all vaccines take five years or much longer.

Finally, there’s a big difference between having a vaccine ready to go and being able to manufacture or administer enough doses for hundreds of millions of Americans. From scaling up the production to meeting global demands to deciding which populations should get it first, plenty of potential roadblocks remain.

If any of these unexpected scenarios were to occur, our nation could end up reaching herd immunity (and ending the pandemic) through infection, not vaccination.

Such a scenario—one in which there is no safe, effective, long-lasting vaccine—would be ugly. It would likely involve keeping current restrictions on businesses, schools, and public gatherings in place (to avoid overwhelming critical care units). But it would also involve a prolonged coronavirus recession, worsening mental health problems and rising death tolls—perhaps hundreds of thousands more.

As the world’s leading virologists and immunologists plan for, and do everything possible to avoid, these worst-case scenarios, Americans are left with little choice but to root for a vaccine and hope Dr. Fauci’s “cautious optimism” holds true. 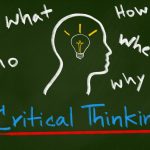 Why telemedicine needs to be a permanent part of Medicare [PODCAST] 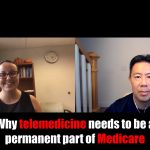