In early 2001, my sister was tired, paler than usual. We didn’t think much of it. Then, months passed, and crimson pinpoints appeared on her skin. My brother and I took turns grasping her arm and snickering as our handprints would appear as red dots just a few minutes later. Symptoms amassed silently, but on my ninth birthday in May, something big happened.

I remember hearing words like “low blood count” spoken by doctors, not knowing what that meant but feeling the weight of the words as they draped over everyone in the room. That day, my sister was admitted to Phoenix Children’s Hospital.

By June, I was nine years old.  My 11-year-old sister was in the hospital’s hematology/oncology unit shackled, like a prisoner, to an IV post with blood products tethered to her body. My family and I had left her room and waited to have our blood tested. We would find out who, God willing, was a bone marrow match, the one who could save her life.

I sat on a plastic phlebotomy chair in the kind of room we are all familiar with. An exam table with crinkly butcher paper sheets. Empty walls. Fluorescent lighting bleached everything in the room. Pulses throbbed in both temples sending shockwaves across my skin, like a series of tiny explosives systematically detonating among the viscera.

The nurses slathered the crease of my elbow with numbing cream and assured me that if I was brave today, I’d be offered treats on my way out of the office. But I wasn’t scared of the needle. I was terrified that if I was the match, my life would be swapped for hers. I convinced myself that I would die in surgery. I’d seen enough movies and church services to know that, sometimes, one must sacrifice their life to save another. When presented with the prospect of this heroic action, I wanted no part of it.

So, I stared at that needle hiding underneath an opaque cap. I tried to calculate how long it was. My stomach rolled in my gut and prepared to expel its contents. The needle wiggled into my median cubital vein, and I felt the life drain from me. Crimson liquid exploded into the vials, and the room spun like a ride at the state fair. Once the needle retreated, I cried softly, not wanting to be weak, knowing my sister had faced horrors many degrees worse than this simple needle stick. Tears hung on my lower lid like a stranded mountain climber struggling to keep his grip.

Please, God, don’t let me be the match, I begged, knowing that this wish might have a dire impact on somebody I loved. If I was a match, I didn’t think I could do it, but I also knew that I wouldn’t be given a choice. In my mind, I was waiting for Pilate to wash his hands.

A week later, the lab called to inform us that my brother’s DNA matched, not mine. I didn’t feel relief with the news. Rather, confusion and shame. And, now, with a bone marrow transplant on the horizon, my sister started chemo. I watched her fight the urge to vomit all day, saw her hair fall out. I pulled a lock out of her scalp myself, it easily released from her head, like a weed being pulled from the root. We both laughed at first, but at night those uncomfortable giggles melted to tears.

Finally, after months of suffering, she had the transplant, and her body began healing. My family would now have to find a way outside the hospital to heal our collective soul. Mine alone felt like it had been crumpled, worthless.

Years passed, and thankfully, she fully recovered, started a family. Meanwhile, I grew up, moved to Washington, DC, made a career in politics. I worked in prestigious places and met supposedly important people, and still arrived at home each night feeling vapid. I twitched, compulsively picked a hole in my scalp, thought of excuses for why I had a scabby bald spot when people asked. I felt the seconds of my life’s clock exploding away.

Sometimes, trauma alters the way others look at you. Mountainous scars appear where broken bones were once repaired. Patches of skin grafted where it had previously melted away. In my case, trauma altered the way I look at myself, because only I could see the fibrosed, calcified patches that peppered my soul. I was tired of feeling ugly. God, though, was making plans to intervene.

I spent four years secretly completing my pre-requisite coursework and volunteering at a fire department while still working in politics. I lived a double life, lied to employers about my future plans. But, my soul felt more energized, even as my body was exhausted from sleepless nights studying. I was getting my life back. Learning forgiveness. After years of trying, I was accepted to PA school after a 4-year effort.

Now, I’m finishing my didactic year. I don’t know when clinicals will start because of COVID-19. I’ve been pummeled by tests, and humbled by patient encounters, and adjusted to online education, and failed more this year than I have in my previous 28 years. But my soul now vibrates in harmony with fate. Some days, it feels like I am at superhero school.

I hope as a clinician I never lose that feeling, because that is what has given me permission to forgive my shame-filled nine-year-old self. Today, I am studying, so one day I can care for patients like my sister, and for families like mine. And even when the world crumbles around me, I will ground myself knowing that my life now means something, that the world is a better place because of our health care workers. What an honor it will be to join those ranks. Thank you, I say, to those who are fighting every day, for not just saving the lives of your patients, but mine too. 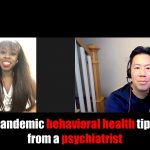