An excerpt from The Surgeon’s Obol.

“Isabella Isaksen,” I said with an arm extended. “Most people call me ‘Izzie’.”

“Mike Gunderson,” came the reply. Most people called him Gundy, but he didn’t feel the need to let me, the goddamn intern, in on this. And there was no doubt that I was an intern. My short white coat, de rigueur for the interns at Ohio Memorial General Hospital, was blindingly white and so starched I could be heard coming down the hall.  My coat had had the femininely rounded lapels that set me apart from the rest of my classmates; I didn’t appreciate this divergence from the norm of the rest of my peers in the intern class. So much so, that I altered the lapels the night before I had to wear the thing for real, to give it a more rigid, masculine look, silently thanking my grandmother in the process for teaching me how to sew.

The transfigured coat was also crammed full of pocket guidebooks, paper, a reflex hammer, calipers for reading EKG tracings, prescription pads, bandages, rubber tourniquets for drawing blood, and a host of flashlights, flashcards and ballpoint pens crammed into the upper breast pocket. My stethoscope was draped around my neck, almost hidden among the dark tresses framing my face. My eyes, darting from person to person and place to place, belied my cool exterior.

“Well, you should be scared. I just about wet myself my first night on call,” Gundy smiled, testing my mettle.

“Really? Well maybe a little,” I admitted, holding index finger and thumb a few millimeters apart to lend imagery to my trepidation.

“The night can be very frightening in this place when you are on your own with a crashing patient,” he warned.

Michael Gunderson was thirty-three years old, more educated than 99.99 percent of the population of the world, and was married with three little kids at home. He worked 100 hours a week, was on call seven days a week, 24 hours a day, and made less than a union pipefitter, which he never tired of letting us know. He hailed from Appleton, Wisconsin, where they qualified apparently true statements with “Yoo betcha'” or “Dontcha know.” They drank “sodah,” ate “brahts” and rooted for “da Pack” like Republicans root for tax cuts.  His wife, from Eagle River, was beyond bitter at the treatment of her husband and her family by this place and this life. He was biding his time until he could enter private practice in upstate Wisconsin and be more than adequately compensated for his time and energy.

We were in line at the “Feed.” The cafeteria would corner off a section of the dining hall at dinnertime for the residents on call and laid out the leftovers from lunch, cattle-call style, for the residents to scarf down. The only upside to the whole process was that the food was free. You couldn’t be late, or there’d be no food you’d have to bum something from a patient too sick to eat or liberate some crackers and Ensure shakes from the patient supplemental dietary cart. The attraction for the junior residents was the opportunity to relax a little from the stresses of the day and listen to the senior residents as they held court, telling war stories of difficult surgeries or run in’s with “the Boss” or “Pops” as Patterson was colloquially known.

“That’s right. Where do you start? Who’s your chief?” Gundy asked me as he began filling up his tray with some sort of meat dish. “Extra gravy, Sally, if you don’t mind,” he insisted to the gal behind the hot food counter.

“All right, well they started you off on Surg Onc, in the frying pan. That’s a tough service.” Gundy eyed me, not so subtly, up and down. He had filled his tray up with meat and potatoes, ice cream, and tea. I had no appetite and just got coffee.

Gundy led me towards the tables where the rest of the residents on call were settling down for the feed. As we passed one of the large trash cans, Gunderson sat his tray down on a nearby table and said, “Come here, kid.”

Gunderson started going through my coat pockets, like a seasoned army veteran might treat a green recruit. He threw away my calipers, notepads, flashlights, reflex hammer, tourniquets, and all but one of my handbooks. He pocketed one of my generic prescription pads for himself.

“Believe me, you won’t. You need to travel light. That coat weighed 25 pounds. You’re gonna need that neck when you grow up. Now it’s just right. Oh, and one more thing, stow that damn stethoscope in your pocket. You look like a goddamn flea.”

“Now go back in line and get something to eat, put that f*cking coffee away and go meet me at that table over there.” Gunderson pointed to a table full of guys and one girl who were summoning him by waving and yelling his name.

Bottles and pacifiers: advice from a Latinx pediatrician 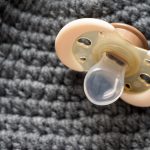