Our country, and the world, is beyond exhausted by COVID-19 and the utter chaos and destruction of lives it has caused. All people, including physicians, are being pushed beyond capacity. What do we mean, collateral damage? Originally related to war: the unintended result of a terrible, unprecedented event or action. We may not be in a traditional war, but make no mistake, we are in a war.

Imagine – you have a child or young adult with life-altering/threatening mental health issues (not mild anxiety or depression). On a good day, navigating mental illness is challenging. Obstacles include:

When we hear “cancer,” patients and families are supported by the community with meals, compassion, and understanding. However, when we hear of mental illnesses like eating disorders, psychosis, suicide attempt, we run. We hide. It’s 2020, yet mental illness remains one of the most stigmatized, misunderstood, and discriminated diseases, even by physicians, those that pledge to provide care to all people, not just those with a “cool kid’s disease.”

Bring on COVID-19 – hospitals locked down, family members isolated from ill loved ones, overtaxed frontline medical staff attempting to provide care in stressful conditions -in a system already biased against mental health patients, especially adult patients. What could possibly go wrong??  Enter: patients too mentally compromised to advocate for their own wellbeing and safety. Brains being held hostage by mental illness. Yet, these patients are left alone in an ER—no one to advocate or support them with an illness poorly understood by medical professionals.

Three different cases illustrate the atrocity and reveal the same theme: lack of sound resources and knowledge, and a lack of compassion, in a system already biased against their disease.

Patient 1:  A 19 year old with severe chronic anorexia with acute weight loss and prolonged caloric restriction, in need of medical stabilization due to her malnutrition, presents to the ER, a repeat scenario for many years. Her mother, a physician, and intimately knowledgeable of her extremely complex history, is not allowed to be present to give appropriate history. The patient refuses to be admitted despite being medically and psychiatrically unstable, as well as meeting admission criteria. ER doctor discharges the patient because “she wanted to be” without consideration of the above.  And, the ER was “busy.” Her parents feel powerless, knowing when she decompensates to this point, only NG feeds can stabilize. Following day, she presents again to the ER, on the precipice of discharge once more despite worsening vital signs and labs. This time, her desperate physician mother knew the “right buttons” to push. The patient is finally admitted. Non-medical people would not have that “insider knowledge” for their ill loved ones. Period.

Patient 2: A 22 year old with acute new-onset severe mania and psychosis and danger to self with a history of mild intermittent anxiety.  Having increasingly progressive mental and emotional stress due to social isolation/distancing and reduced job hours. Over the course of five days, his parents took him to no less than three ERs and three psychiatric hospitals, but they were not allowed to be present to advocate for appropriate intervention. He was discharged each time, “stable.” Despite a signed release of information, his parents repeated attempts to speak to doctors were ignored. Parents forced to rotate shifts 24/7 to attempt to monitor their son’s safety.   Eventually admitted but discharged after less than 48 hours into 90+ degree weather, without ID or cell phone or a call to his parents, still psychiatrically unstable. Within less than 24 hours, the patient becomes physically violent with his parents and is transported to the state psychiatric facility.

Patient 3: A 21 year old with a history of an eating disorder and severe depression who presents with suicidal ideation and a plan. Previous suicide attempts.  Parents were not allowed in the ER with the patient to provide context. No family history or past medical/psychiatric history obtained. Discharged home. “Not a danger to herself and a hospital full of COVID patients.” Parents set up a rotating schedule to monitor her and remove all possible harmful objects from home.

These real scenarios, of which I have intimate knowledge, have occurred in just the last two weeks. Imagine how many more there are. Sobering. So many things are coming undone in our health care system due to COVID 19. The disparities in care, the lack of a seamless public health system, politicians getting in the way. Mental health is the forgotten stepchild in the U.S. health care system. And yet, mental illness affects more Americans than any other disease, and the numbers are growing. Twenty-nine million Americans are affected by eating disorders, with the grim statistic of 1 death every 52 minutes. General mental illness lifetime prevalence is 46 percent. Half of all mental illness begins by age 14 and 75 percent by age 24. COVID-19 has brought the woeful inequities of appropriate mental health care front and center – it cannot be ignored any longer. Mental illness is a brain-based neurologic disease. It is time to treat it as such. It is time for physicians to be educated on mental illness and to have the same compassion and urgency we have for cancer patients or other “physical” diseases. The brain is indeed a part of the body; brain illnesses should be treated with the same conviction, compassion, and attention as other physical illnesses.

Mental health care is the not so silent collateral damage of COVID-19. We can and must do better for our mentally ill patients. They deserve it. Their families deserve it. As physicians, we took an oath to care for all people, not just those with a “cool kid’s disease.” It is time.

Ann L. Contrucci is a pediatrician.

Where on earth have everyone’s manners gone?

How to handle family and parenting stress as a physician [PODCAST] 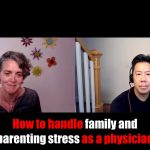