I look out at the world through bright blue eyes. Blonde hair. A skinny but shapely 19-year-old’s body. I know six languages. I am educated. I can prescribe medicine that saves lives. I am in love. I am a person.

I look down at the tattoo on my arm. A number— like cattle. My family is gone. My home destroyed. I am living in a small room— no bigger than 10 by 5 feet— crowded to every last square inch. But I am alone. I am afraid.

My brown eyes well with tears when I think of my grandmother. I have brown hair, an evidently unpalatable classic Jewish nose, and I do not speak six languages. My grandmother was beautiful and looked European. To use a modern phrase, she had “passing privilege.” I can’t help but wonder what it would have been like for me— someone who would not have had the same.

Her family was taken and killed. First, one by one. Her brother was “hosed” to death. For those unfamiliar, this is when a high-pressure hose is aimed at someone’s internal organs until they die from the brute force. Then, all at once. Her parents, uncles, grandparents— tragically ripped from her life and gassed. Her husband— separated from her and interned in the neighboring camp conjoined to hers by only a fence, which may as well have been an impenetrable wall.

The German Nazi soldiers, enamored with her good, non-stereotypically Jewish looks, decided she was physically too valuable to be immediately extinguished. They had bigger plans for her. “Is anyone a nurse?” they asked. Her hand timidly rose. She was not a nurse. But her family owned a local pharmacy, and she had worked there long enough to fake it to the untrained eye.

They handed her an orange. It was a test. She had to inject the orange, and they would then decide if her skills were up to par. In what I can only imagine to be an indomitable display of will, her hand held steady, and she calmly grasped the syringe and pressed down.

Ah, a nurse. A second of relief washed over her body. She had spared her own life, without knowing that the soldiers had no intention of killing her at all. What better Jew to rape than the Jew who does not look like a Jew at all? In the midst of the gross inhumanity, something as superficial as the color of her eyes and hair saved her.

I think about that a lot, especially now. As a prospective physician, I will be in a position of power. Hearing her story, no matter how many times, feels like watching a movie whose ending you already know, but each time you watch, you hope you will be wrong. Every time I hear her story, I hope someone will intervene. Someone powerful will look around and say, “this is wrong.” No matter how normalized the violence was, I always hope and dream that someone’s sense of humanity will supersede the status quo, and they will stand up for my grandmother. And her mother. And her father. And everyone.

When I tell my friends this story, they are disgusted. “I don’t understand how people could be so inhumane! How could people turn a blind eye! These people are monsters!” They’re right. But what does that say about us? It is easy and convenient to look back on history and say you would have been different. Better. But how far have we really come?

I’m tired of seeing my Black brothers and sisters having their lives devalued based on something as superficial as their looks. I’m tired of having conversations with people in which we debate the value of Black lives against the, what I would think to be obviously less important, things like the value of property. I’m tired of watching videos on Facebook of Black people being murdered, every time hoping it will end differently. Yet, these people mourn with me for my ancestors? They qualify the current loss of life by saying things like, “well, that is a bad apple.”

It is incomprehensible to me that to this day, we are still having these debates. Have we learned nothing?

I can’t imagine what Black people are feeling today. Actually, all I have is my imagination. But, if I can do anything in this world, it will be to use my power for good. I vow to be the person who changes the ending of the movie. I will use my medical education to learn more about the injustices suffered by the Black community and be cognizant of my biases while caring for the lives of others. I will stand up to people who have forgotten their humanity. I will encourage others to do the same. I will never stop listening, learning, and reflecting. Will you?

The physician who treats depressed, anxious, and suicidal teens [PODCAST] 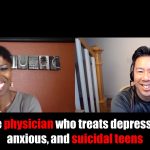