He shoved the paper with the address in his pocket. Then he found his little black bag with the oils and other implements for giving what once was called the last rites of the church, but were now termed the sacrament of the sick, and headed off in the direction of the Flats. Sixty-six Center Street. He’d been there before, he was sure. Only the week before, the adjoining block had burned up. It was another of those mysterious fires, on weekends mostly, that were plaguing the city recently.

On the first floor landing, there was a wall of mailboxes, common in the tenements. Little black mailboxes, some fairly rusted now, each with three or four Spanish-sounding names pasted on the outside. Must drive the mailman nuts, he thought with a grin.

The apartment he sought was on the fifth floor. There was no elevator, so he began climbing the stairs slowly. His name, by the way, was Peter Dillon. The Rev. Peter Dillon, SJ. He was 33 years old.

As he climbed the dimly-lighted stairway, he could hear muffled conversations in rapidly-spoken Spanish. In the background, over the hum of voices, there was the sound of loud Latin music. Dance music, he thought.

The fifth-floor hallway was lighted by a single low-wattage bulb, making it difficult to read the apartment door numbers. His knock was answered by a uniformed police officer, a tall young man, slender, and slightly stoop-shouldered.

“Yes, I speak Spanish,” he answered.

“I haven’t been able to get much out of them,” the officer continued. “Nobody seems to understand a word of English. All they do is cry, except for the old one over there.” He pointed to an elderly woman sitting off to herself in the corner of the kitchen.

“She just sits there.”

The apartment was very warm. There was almost no air coming in from the front room with the windows that opened on to the street. It was July heat. He could hear someone talking in a loud voice on the street level below.

Everybody looked frightened, He began his questioning in a quiet voice, trying to seem friendly and thereby convince everyone he was on their side.

And he was on their side.

“How did the baby die?” he asked a man who he guessed must be the father. “Who was watching, who was babysitting?”

“Suffocated,” the man told him. He looked about 24 or 25, slight in build, thin, and didn’t look very well. There were also two women, both in their 20s, Peter guessed.

One was crying softly. The infant’s mother, he assumed. The other woman was speaking softly to her. He said a few words to the one he thought was the mother, comforting words, and there was a quiet “Thank you, Father,” spoken in English.

Two children were standing nearby, a girl of about 12 and a much younger boy. They looked frightened. They, too, were at home when the baby died, at home with their grandmother, Blassina Torres Santiago, the small woman seated in the kitchen.

It was a common enough accident — that’s what Peter was calling it.

He asked to see the corpse and took from his bag oils to bless — to baptize, the still form before him. He was about to ask for a phone so that he could make calls about arrangements when a second police officer suddenly appeared. This man was in plain clothes. His name was Dineen. A bulky gray man Dineen presented as almost depressed and probably was what with the work he was expected to do lately.

“How do you see this as happening, Father?” he asked. “You speak Spanish, do you?”

You know I do, mister, Peter thought.

Peter then told Dineen what he knew, but right away, he decided he didn’t care for this police detective who so far had completely ignored the family.

“The baby suffocated, happened about two hours ago. Crib death. It seems the infant got tangled in bedclothes.” He pointed to Blassina Torres Santiago, “The old woman found the baby dead.”

“She was here alone?” Dineen asked, suddenly more interested and studying the woman. There were only two rooms in the apartment, a kitchen, and the front room where they were standing.

“Yes,” Peter answered, “except for the children.”

Dineen looked at the priest hard, as if trying to take his measure. After a long silence, he asked to see the baby. He wrote more notes in his book.

He then slipped the book into his coat pocket with kind of a finality, as if to say: Well, now, I have it all down, and I must be off.

He stood for a moment, though, studying the apartment again as if looking for something or someone that he had missed when first he came in. His eyes stopped on the old woman, still looking down at the floor. She hadn’t moved an inch. Then he asked Peter politely, “You are staying here for a little while yet, Father?”

“I think so, yes. The family needs further comforting and support.”

Dineen stood by the door that led to the hallway as if trying to make up his mind about something, maybe even deciding if he should leave. Then he spoke to Peter in barely a whisper as if he didn’t wish to be overheard, unlikely as that was in this setting since nobody spoke English. “You keep an eye on the old one,” he pointed to the woman, “the grandmother. She’s going to do something nutty.” That’s all Dineen said and. Peter thought, Just how do you know so much, a smart-ass cop who is suddenly so full of wisdom, yet knows virtually nothing of the language or culture of these people?

Peter walked a few steps down the stairs with Detective Dineen, and in the apartment downstairs, he made several calls. And while he was gone, out of the apartment for those few moments, Blassina Torres Santiago ran across the kitchen, into the front room and literally dove headfirst from the fifth-floor window that opened on to Center Street.

Social isolation in the elderly [PODCAST] 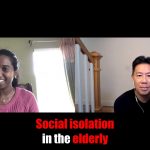 A priest, a police officer, and tragedy
1 comments