Our country is currently battling two urgent and severe health care crises: COVID and systemic racism. We believe that addressing systemic racism now is as urgent and as dangerous to the health of our nation and its people as the COVID19 pandemic. In addition, we believe systemic racism is intersecting with the COVID-19 pandemic, as seen through disproportionate access as well as morbidity and mortality among people of color.

While it will take a multitude of resources along with medical and non-medical organizations to address these pandemics, one area of addressing systemic racism is how we are embedding implicit bias in our medical education system.

New medical students will start across the country, and we must ensure that students and medical educators begin medical school on the right footing, with a “lens of equity,” and a chance to make incremental changes in the system in which we participate.

Crudely stated, in medicine, race is used as a shortcut. It is a “convenient proxy for more important factors, like muscle mass, enzyme level, [and] genetic traits,” that physicians do not have time to investigate in a clinical setting.

But race is a bad proxy since it does not add relevant information and usually overwhelms clinical measures blinding doctors to patients’ symptoms, history, and presenting illness.

Dorothy Roberts, JD, has stated that race medicine leaves patients of color vulnerable. For example, the stereotype that Black and brown people feel less pain, exaggerate their pain, and are predisposed to drug addiction correlates with studies that reveal “relative to white patients, Black patients are less likely to be given pain medications and, if given … they receive lower quantities.” Race medicine is perpetuated through clinical measures as well. Glomerular filtration rate, an indicator of kidney function, produces a different GFR estimate for the same creatinine level depending on whether a patient is African-American, which has implications for whether patients are placed on transplant lists. We are in no way advocating to ignore race.

But race medicine is flawed.

The medical literature on hypertension uses genetic explanations of the disease’s higher prevalence among Blacks than whites to support the categorization of treatment strategies by race. But hypertension prevalence is higher in Spaniards, Finns, and Germans than in Blacks, and a systematic review of genomic studies focused on race and cardiovascular research indicates that the contribution of genetic difference among races is minimal at best.

Further, based on current understandings of race in medicine, how would you treat siblings with one white parent and one Black parent, but who appear phenotypically different – one appears externally to be white and one Black? Which GFR calculation or ASCVD risk score would you use? Which first-line blood pressure medication would you start? The problem with race medicine is that it redirects focus away from structural determinants that cause racial gaps in health outcomes and places attention on racial differences in disease.

In 2002, The Unequal Treatment by the Institute of Medicine concluded that “for almost every disease studied, Black Americans received less effective care than white Americans.”

In David Ansell’s Bias, Black Lives, and Academic Medicine, he notes there is evidence that physicians hold stereotypes based on patients’ race that has the ability to influence their clinical decisions. Populations who experience the most negative cultural stereotypes also have the greatest health care inequalities – this has been prevalent throughout history, most recently during the COVID pandemic.

As it is known that race shapes public beliefs, at an academic level, we must address the presence of implicit bias in medical school curriculum, study materials, and assessment methods. At best, the mention of race reinforces existing biases, and at worst, mention of race introduces new biases to student-doctors. These biases have the potential to become part of larger systemic racism, which ultimately increases health disparities experienced by minority patients, most notably Black patients.

Between 2018-2019, we scored over ~4,800 question vignettes blinded by race from commercially available Step 1 preparatory question banks, and using a novel scoring system recorded the “social stigma scores” (SSS). SSS is the summation of positive (+1) and negative (-1) characteristics listed in the question stems. In these manufactured case vignettes, Black men and Black women had the lowest mean SSS in all three question banks. We concluded there exists a discrepancy in the portrayal of patients based on race and gender in Step 1 preparatory question banks; and, that repeated exposure to these questions places student-doctors at risk of developing or reinforcing unconscious biases, which are known to contribute to structural racism and health disparities for minority patients.

Despite the multitude of breakthroughs in medicine, there still exists a failure of imagination when it comes to race in medicine and medical education. Many physicians and medical educators feel ill-equipped to engage debates about race in the classroom, yet educators must improve academic capacities for teaching about race (and racism) in medicine. Resources for curricular reform can be found here. Below are suggestions for curricular reform from preclinical to clinical education:

1. Address discrepancies in the behavioral portrayal of fictional patients in vignettes used to prepare for national exams.

2. Address use of race as a “hint” for correct answers in institutional level examinations and national examinations.

4. Establish institutional policies that remove race in presentations on clinical rounds and removes race from clinical notes — race should only be listed in demographic information or social history, and it should be self-identified by the patient.

Asantewaa Ture is an internal medicine physician. Jeremy Chapman-Gould is a psychiatrist. Paul Kent is a hematology-oncology physician.

What’s to blame for the obesity epidemic? [PODCAST] 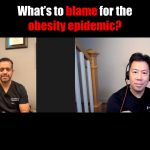 Why do Black Americans have worse COVID outcomes?
5 comments