Without a doubt, life has been peculiar since the onset of the COVID-19 epidemic. The social, political, financial, and emotional tolls have been staggering; however, most recently, I’ve been interested in the sensory deficits it seems to be unmasking. Despite being back out in society, at work, or venturing into my children’s school, I have yet to resume seeing people’s faces. The world, as I know it, has become a moving body of masks and bandanas.

Though the eyes remain exposed, even these windows to the soul are rendered a bit more obscure without the context of the surrounding face. The other features seem critical for identification, communication of emotion, and social discernment, yet they are now effaced. In this new world of masks, there is an entire dialogue within our interactions to which we are now blind.

Working in an operating room setting where hats and masks are worn regularly, I am accustomed to this. Not seeing faces is routine, and there are colleagues I can pass in the grocery store to this day without recognizing. It never seemed unusual until those hats and masks disseminated into the preoperative area. Now I confuse my pre-op nurses, unless they are particularly tall or short. My airway assessment, a critical exam for an anesthesiologist, is hampered.

I need to be able to keep patients breathing after putting them to sleep, because no one lives long without oxygen. Part of my profession is thus scrutinizing people’s faces, searching for clues of impending difficulty. I look at the size of their mouths, how wide they open, the range of motion of the jaw. I look at their tongue size, the protrusion of their teeth, and the arch of their palate. I lay my hands on them, measuring their neck circumferences and thyro-mental distances. This exam is focused, and of course, the patients drop their masks for it; however, there are parts of the exam that are a matter of observation. Watching their faces move when they speak to me is part of the assessment, and it can now be lost in translation.

This phenomenon likely exists for everyone in different ways, but I wonder if it does so to an equal degree?

The sensory limitation of mask-wearing brings to mind a neurologic condition called prosopagnosia, or face blindness. It is typically congenital, although it can be the result of a stroke or injury in a part of the brain called the fusiform gyrus. Affected individuals can’t recognize faces and in written accounts, describe being unable to identify even close friends and family: children, spouses, or even themselves. The lack of facial recognition is especially poor if an individual is seen out of context. Often, these patients identify others by alternative features such as height, voice, prominent eyewear, or a distinctive nose. Jane Goodall is afflicted by prosopagnosia, as was the late Oliver Sacks, a renowned neurologist, and author. He wrote about his experiences and his patients with agnosia and other neurologic lesions in his book, The Man Who Mistook His Wife for a Hat.

Dr. Sacks wrote the following in an article published by The New Yorker,

Most of these patients adapt in various ways and are able to live functional lives, but they suffer socially. The condition is often familial and is thought to represent about two and a half percent of the population- which is to say, millions of people! Like most things, facial recognition ability exists on a bell curve. The prosopagnosics are on the left side of the curve, and there are those who exist on the far right, called “super-recognizers.” These individuals can recognize the face of nearly every person with whom they’ve ever come into contact, regardless of the context. They can often even recognize a person by seeing only a small portion of the face or the way he/she moves or walks.

Of course, the remainder of the population exists somewhere in the middle of the curve. Some are better than others at facial recognition, and some are quite poor. Many neurologists speculate that the incidence of prosopagnosia is higher if one accounts for a larger area on the left side of the curve. Milder forms likely exist and are under-reported or undetected as people simply accept that they are bad at remembering faces.

I suspect COVID, or the fact that we must wear masks in the setting of COVID, is making those differences in brain functioning more apparent. The masks are covering some things while revealing others about the way we see, interpret, and communicate with one another.

One of my patients complained to me yesterday that the masks have upset his dating life. “You never know what surprises are lurking underneath: Crooked teeth! Facial hair! Weird moles!”

I suggested this may be a better way to find a partner. After all, there are plenty of ugly things on a person’s insides, and those take much longer to discover than unfortunate birthmarks. He dismissed the idea. Perhaps he has a point. The fact remains that while they ought not to be the standard of true beauty, faces are important.

Hailey Amick is an anesthesiologist who blogs at Facing Monsters.

In these times of crisis, remember the Golden Rule [PODCAST] 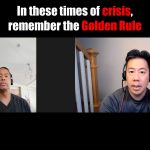