It is exciting to see so many American medical students join the protracted struggle for racial justice. Some students are involved in efforts within their institutions to affect change–both curricular and extracurricular. Others are working beyond their institutions, in the streets, and on social media.

While student activism is transforming American medical schools as we speak, an additional key to making sure that the movement both persists and succeeds lies with what residency programs do.

Those outside of medical education may not be fully aware of the extraordinary power that residency programs wield. From the first day that they arrive on campus, medical students are told to be careful about what they say on social media. They make decisions about how to use their extracurricular time, including involvement in research and even joining organizations, largely based on how it will be perceived by residency programs.

This dynamic has created a risk-averse environment within a population of students that we need, now more than ever, to be courageous. Instead of working with their mentors to develop a strong voice of civic engagement, many students participate in social media only with pseudonyms so that residency programs will not find them. They may speak up within their colleges, but they often do so in fear of what may get included in their residency letters. Almost without exception, they speak more circumspectly than they would like to. I have been approached by more than a few students who are concerned that their involvement in Black Lives Matters protests may impact their professional trajectory, if not formally, then informally because they know that not everybody around them is truly an ally.

Many residency programs have issued strong statements condemning the killing of George Floyd and other black individuals killed by police and others. I have seen residents out in the streets of my hometown of Columbus, Ohio, and many medical students with whom I have spoken have taken note of those residents’ presence. Seeing residents willing to participate in peaceful protest sends a signal to current medical students. It empowers them not only to be courageous themselves, but gives them hope that they might someday join a residency program that embraces an ethos of social change. It gives them hope that they may not have to choose between medicine and commitments to social justice.

With many medical schools focused on ensuring–often myopically so–that their residency placement rates stay high, only residency programs themselves can really change this dynamic. Instead of Damocles swords hanging over students’ heads, we must turn the role that residency programs play in developing medical professionals into opportunities for change.

The message that residency programs convey could have a powerful thawing effect on the fear that lingers in medical school halls. This is particularly true for students of color, many of whom already experience high levels of trauma and face unique structural barriers in their education, from being admitted into medical school in the first place, to persistent microaggressions, to curricular exclusion. As we know, many of these students also fear for their safety and lives for activities as seemingly mundane for white Americans as a jog or a visit to a store. These students shouldn’t have to fear for their professional prospects as well, just for speaking up.

To harness the full energy that committed future medical professionals bring to an issue that is increasingly being declared a public health crisis, residency programs should not only declare their support and solidarity, but make publicly clear that they will actively welcome students with dedicated social justice commitments into their programs. They should make clear that students arrested in the course of peaceful protest will be similarly welcomed, and that they distinguish arrests long-considered essential to the American civil rights movement as a sign of Hippocratic commitment rather than a potential red flag.

There has been some conversation recently on social media about the residency interview process. Some have floated the idea that interviewees should ask prospective residency programs what they have done to join the anti-racism cause. This is a great question to raise at an interview, and resistance to it by interviewers will indicate that the program is a bad fit for that candidate. Aspiring physicians should never be discriminated against for standing up for the lives of others, whether those lives are their own, their family and friends, or those of others–including future patients. If applicants are discriminated against for speaking out, then they should not want to be part of those institutions.

But we should also broaden the scope, with residency programs asking candidates about their anti-racist and social justice commitments as well. The effect would be a broader acknowledgment that racial justice is be a core health concern that manifests not only in persistent disparities in health outcomes, but trauma and violence inflicted on people of color.

Residency programs surely know that while they have to work hard to attract some of the best candidates, they can also use the power that they hold over future physicians to affect real change. The most important step residencies can take is to issue strong statements speaking directly to anxious and fearful medical students to assure them that they will be rewarded–and not punished–for cultivating a strong and unequivocal voice in the service of justice. Black Lives Matter is one of the civil rights movements of our time. Whether or not our future physicians play a transformative role within that movement will depend on the signals sent by the powerful gatekeepers of medical education.

Daniel Skinner is a health policy professor and host of the podcast, Prognosis Ohio. He can be reached on Twitter at @danielrskinner.

How the pandemic is affecting the residents [PODCAST] 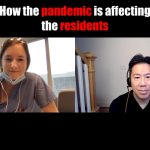