Black health care professionals are in mourning. Over the last three months, we have watched COVID-19 ravage our communities and claim the lives of our patients, friends, and family — in the process, the disease has been recognized as anything but the “great equalizer,” highlighting the racial and socioeconomic inequities that have long lead to worse health outcomes amongst black populations.

Moreover, we have seen an uptick in the past few weeks in the violence against black individuals, at least that which has been captured on camera: videos of the deaths of George Floyd and Ahmaud Arbery have made several rounds through the media, making the gruesome images nearly impossible to avoid. The deaths of Breonna Taylor and Tony McDade at the hands of police have further incensed the black community and its allies, inciting protests in all 50 states and around the globe.

Yet, despite the suffering that plagues them, black health care professionals have largely avoided calling attention to their own distress. This silence is intentional and harmful.

To illustrate one of many examples, we may refer to the recent case of Christian Cooper. A viral video depicts a white woman in Central Park calling the police, claiming to feel threatened after Cooper asked her to leash her dog. Shortly after, social media demonstrated an outpouring of support for Cooper in response to videos of him birding: one tweet among many read “Harvard grad. Biomedical editor. Former editor at Marvel Comics. Avid birder. Christian Cooper is not a threat to anyone.”

Cooper was celebrated for his response, both in the park and afterward, to the racism that was inflicted on him. Certainly, the media coverage provided a rare and gratifying insight into the story of a victim of racism, one that extends beyond the incident that brought his name to tongues across the country. Perhaps more importantly, the media uplifted his story because Cooper is a testament to the handsome, well-educated, well-spoken, even-tempered black man upon whom racism should not be inflicted.

Respectability politics have been leveraged for decades to invalidate black rage, as they suggest that the victim, not the aggressor, is to blame for a racist incident: if only the teen had pulled up his pants, or cut his hair, perhaps he could have clinched that job offer after all. The concept bleeds into our idea of professionalism and defines our understanding of the elite, among black and non-black people alike. If Cooper is the archetype of the respectable black person, the lesson from choosing to amplify his story is that someone like him should deal with racism calmly and put it behind him swiftly. By heavily promoting such reactions, society only continues to diminish the validity of outspoken forms of black frustration.

For black physicians and trainees, the culture within the medical establishment compounds the aforementioned standard to show a calm response in light of racial adversity. Pressured by a culture that prides itself on minimizing displays of emotion in the face of disturbing pathology, physicians are often encouraged to prioritize stoicism in their reactions. Historically, the reaction was thought to benefit both the patient and the provider by shielding the health care provider from the emotional challenge of confronting vastly different medical scenarios in quick succession. Stoicism in medicine has been debated in more recent years, with the impact of stifling emotion debated, but still, the tradition stands.

These two cultural forces — the pressure to comply with the archetype of the highly-regarded, even-tempered black person, and the stoicism pervarding medicine —  are perpetuated by media, administrators, and colleagues, all of whom resoundingly imply that the appropriate response in the medical field to violence against black people is a restrained one.

The impact of minimizing true reactions is significant. Beyond having to shoulder the initial burden of witnessing and experiencing racism, black people are frequently expected to explain their struggle or minimize their emotion, further compounding the mental toll. This so-called minority tax is well-characterized in the literature among physicians and trainees in medicine and has been suggested to accelerate the road to physician burnout. Studies have shown that guarding oneself against discrimination in a multitude of ways, including practicing respectability politics, is linked to worse physical and mental health.

This is unacceptable for an institution that centers itself on healing. It is crucial to push back against the dangerous, normalizing belief that there is a “right” way to respond to racism in the medical profession. Since black health care professionals may face criticism when attempting to voice their concerns, allies in the field should be ready to provide support: by acknowledging these feelings of grief, by educating themselves on systemic racism and ongoing police brutality, and by leveraging their privilege towards shifting power structures within their institutions.

How doctors can navigate the financial crisis [PODCAST] 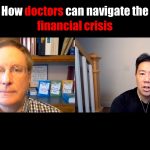