As the reopening was being evaluated, I found myself contemplating the routine use of a mask in public. I was already wearing it 12 hours a day in the hospital. On one of the clinic days, after constantly conversing while wearing the mask, I also found out the hard way that I don’t have the taste buds for non-woven sub-micron thin polypropylene spaghetti. The prospect of wearing one while going to the grocery store seemed a bit annoying. Additionally, I also felt that I would give an impression of someone who is scared.

The thing is: Aren’t we all a bit scared, and rightfully so?

With so much back and forth on what we know (or don’t know) about the SARS-CoV2 virus, do masks even work? I decided to do some recon to see if there is even a remote benefit of covering the face.

Scientists have very carefully demonstrated the exposure to someone’s salivary secretions while they talk. In one laser light-scattering experiment, the speech-generated droplets and their trajectories were visualized in pitch black and recorded. I have to warn, this 40-second video clip is for mature audiences only and can lead to an excessive urge to shower after every face-to-face conversation. The difference in “exposure” from a person speaking with and without a face mask seems stark.

Another study involved infected patients and demonstrated that surgical masks could be efficacious to reduce coronavirus detection and viral copies in large respiratory droplets and in aerosols. This helps reduce further dissemination by infected patients. Many hospitals have a generalized face mask policy for everyone (patients and employees).

It is critical to really understand the above narrative. We always think about wearing a mask to protect ourselves. But in the case of COVID-19, a face covering is seemingly more helpful in reducing the domino effect by lowering the onward spread and protecting others. COVID-19 transmission is different from the known respiratory viral diseases because someone in the presymptomatic phase of infection could also spread the virus. Moreover, some infected individuals may never show symptoms while carrying the virus. Unbeknownst to them, they would be inadvertently disseminating the virus for a period of time. Data utilizing throat swabs suggests that at the time or right before the symptoms start, the viral replication and load may be at its peak and hence is thought to increase the infectiousness. It is estimated that anywhere between 25 to 69% of secondary cases were infected during the index cases’ presymptomatic stage. Universal masking makes intuitive sense in such scenarios.

A computer forecasting model can create various scenarios of mask use by society and its impact on the spread of COVID-19. A study utilizing this simulator has depicted that if 80% of the population wears a mask, COVID-19 infections would drastically lower; while if only 30 to 40% of the population wears a mask, there may be no significant beneficial effect. Aside from artificial intelligence simulation analysis, there is bench research that supports mask use. An experiment from The University of Hong Kong Microbiology department separated infected and healthy hamsters in neighboring cages. The infection rate was just 16.7% when masks were placed close to the infected hamster cage. The rate of infection jumped to 66.7% within a week when no barrier between the cages was used.

This self-explanatory graphic from Science magazine is easy on the eyes.

While science can be persuasive, the proof of concept is more convincing. Japan did not need strict lockdown. And now, with only 2% of deaths when compared to the USA (although it has 38% of the population in comparison to the USA), they are doing business as usual — including subway train travel.

The catch is that nearly everyone wears a mask in Japan. The government sent two cloth-masks each to 50 million households, and all the bureaucrats wore it too, providing a steady directive.

Another country which has successfully stymied the pandemic havoc is the Czech Republic. The government instituted a universal face mask requirement, and so far, they have successfully remained open with less than 50 deaths from COVID-19 and declining daily positive cases. The Czech motto is “your mask protects me; my mask protects you.”

A large multivariate linear regression analysis has been performed utilizing publicly reported data from 183 countries. The results show that in countries where government and societal norms promoted public mask-wearing, the per-capita coronavirus mortality increased on average (merely) by 5.4% each week, as compared with a significant increase of 48% each week in countries where masks are not supported.

Here at home, though, we have struggled some with consistency in messaging from leadership and experts, over time, and occasionally at the same time. It has played a significant role in producing a stale mitigation effort.

While the country continues to reopen, many citizens have a certain amount of lockdown-fatigue and are venturing out, and socialization is implausible to stop. In our subconscious, we get affected by what our prominent leaders and luminary figures do. Slowly but surely, the popular rhetoric impacts our behavior. Social media influencers and celebrities could lead by example. Masks, albeit not a complete substitute for social distancing and hand washing, do create a barrier to touching the face and can serve as a constant unmistakable reminder for maintaining some distance and caution as the pandemic is not really over yet.

We have suffered more than our share of sorrows. Only time will tell what befalls in the second go around. In such perilous times, masks are the lowest hanging fruit for widespread adoption.

A pathologist's urgent pandemic message to the public [PODCAST] 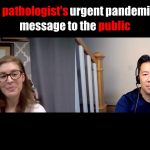 How COVID is exposing poor working conditions in the U.S.

Are you a mask wimp? Get over it.
3 comments