“Would an STI cause abdominal pain?” someone in a class discussion asked.

“Well, when I had chlamydia, I didn’t have abdominal pain,” I responded truthfully.

“OK, Jay. That’s … TMI,” someone else in the group quickly retorted with an uncomfortable half-smile.

Immediately, I felt pressured to usher in some sort of anodyne remark to help dissipate the uneasy cloud that I could feel billowing out around us.

“Haha, I’m just kidding. Sorry,” I replied graciously with a contrived grin, while recoiling back into my seat.

In the moments thereafter, I somehow couldn’t shake off the feeling that I should have made some barbed riposte and that, deep down inside, I wasn’t sorry for what I said. And as the moments dragged on, I was getting the sense that if I continued to remain quiet, the urge to say something would very soon transmute into an unrestrained, apoplectic diatribe.

“Actually … I want to return to what we were just talking about. Why is me saying that I didn’t have abdominal pain when I had chlamydia ‘TMI?’” I inquired brazenly.

All the keyboard typing around me abruptly ceased.

Everyone looked up from their laptop screens and searched around the table for some kind of tacit solidarity in each other’s faces.

A new sobering silence erupted—one that was even more pronounced, protracted, and uncomfortable than the one that ensued when I uttered my first comment about having previously had chlamydia. It was almost as if I had articulated something so anathema to the group that it could only rival the unspeakable taboo of saying “Voldemort” in the world of Harry Potter. In a way, I felt as if my peers thought I was being too provocative, and were perhaps even astonished by my temerity to challenge what may have been perceived by them as a necessarily incontestable fact of what in actuality is a culturally constructed system of social mores of prescribing acceptable content in academic medical discourse, as if to suggest dismissively, “Is it not obvious that what you said was inappropriate? Why is this even a question?”

And to that, I responded loudly in my head, “No, it is not obvious; and it is a question because I feel that your comment inadvertently perpetuates a culture of stigmatization towards sexually transmitted diseases/infections and, by extension, sex itself.”

Seemingly still appalled that I had the audacity to question what was accepted as the conversational norm, the group remained unresponsive. Eventually, I cut the tension with a knife by asking curiously and almost rhetorically, “If I shared that I had fractured my bone or previously had a heart attack, neither of which resulted in abdominal pain, would you have also considered that information ‘TMI?’”

“Actually, yes,” someone else countered quickly from across the table. “If you said you had a heart attack, yeah, I would still say that that was TMI.”

Initially, I had a difficult time discerning whether their statement was in earnest or if it were deliberately adversarial and, therefore, groundless. But before I could explore my potential indignation further, it was time to take a 5-minute break, and everyone dispersed.

It was then that I let out a stream of invective against what seemed to be yet another example of what had now become a larger pattern of events that I had been observing and experiencing first-hand as a medical student for quite some time: a pernicious, unhealthy, and patently harmful culture of sex stigma that is inimical to the advancement of a society that not only advocates for sex positivity but also provides patients with a medical environment conducive to openness, transparency, honesty, and sexual shamelessness, all of which would, in my personal belief, inevitably contribute to better patient satisfaction and dispensation of optimal care.

After all, if we cannot even share our own struggles with our fellow medical students (i.e., prospective physicians) in an environment designed specifically for learning about how various diseases may present differently in different people, how can we expect these same individuals to tackle head-on the tough issues within the realm of sexual health and other challenging subjects/topics in medicine with their future patients?

But the bigger question is not, “Why is me sharing that I had chlamydia TMI?” but rather, “how do we in medicine promote a culture that would make the personal discussion of chlamydia or other STIs, and related topics surrounding sex no longer immutably occupying the territory of conversational taboo? And in what ways does not doing so swiftly and comprehensively contribute to a societally unhealthy attitude towards sex that inadvertently percolates into the interstices of medical care of patients in a dangerously injurious way?”

Talking about our experiences with illness and disease and sharing insights gained from them should not be characterized as “too much information.” Doing so inherently pedestalizes sex as some untouchable, ethereal, unique, special entity, which, as any anthropologist or sociologist would tell you, is and has been the basis of much of sexual discrimination and prejudice in our society and culture historically. When you demystify sex and take away its ineffable quality, you dismantle its very essence of being able to exert insurmountable control over peoples’ values and peoples’ weaponization of their perception of this act as a way to judge the character and morality of others, which has no business in medicine, a protected space where our primary objective is centered around the attainment of optimal health in and care for our patients.

Every time that our human agency to talk about our sexual health experiences and the insights gained from them is shut down, we are implicitly and subliminally creating a lifetime of internalized, self-directed stigma towards our sexual behavior and sexual personhood. It creates a hostile clinical and academic environment where people become deterred from being forthcoming, open, and honest to share the very things that matter to us the most, and that has the most impact on our quality of life: our health.

If we are to truly put patients’ best interest before our own, the pervasive, insidious culture of anti-sexualism that permeates every nook and cranny of our current medical community/establishment (and society) must be deracinated.

In the end, it was never my sharing of having had chlamydia that was “too much.” It was the decision to see it that way that was.

Fact vs. fiction: the battle between life and death in the world of COVID-19

COVID: an impending case of the stripes 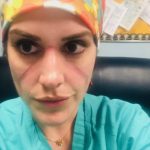