Since the first case of COVID-19 on January 21st, there have been countless stories highlighting the health care heroes. Individuals are risking their lives and demonstrating unanticipated sacrifices to close the wounds on a bleeding health care system. Amongst those watching these stories are students of future health care professions, getting a glimpse at what their lives might look like should there be another outbreak. Common sense would suggest supporting this collection of people. Unfortunately, there sits an organization doing very little to ensure the well-being of this next generation of pandemic soldiers. They are known as the United States Medical Licensing Examination (USMLE).

In medical school, they teach how the body senses fear: mammals either face the fear (fight) or run in the opposite direction (flight). When COVID-19 started to have its troubling impact, the USMLE did just the latter. A non-profit organization, the USMLE is responsible for serving medical students by creating the exams that grant the initial license to practice medicine. Last week, when the new social distancing guidelines were announced, the gross incompetence demonstrated by the USMLE surpassed any of its prior acts of negligence.

Prometric, the for-profit organization that administers standardized tests, announced at 11:30 a.m. CST the cancellation of all non-essential exams until May 31st. There was no list of what exams were considered essential, and with no announcements by the USMLE, students frantically rescheduled their testing dates. Fifty minutes later, via Twitter, the USMLE stated Step exams are essential. Approximately two and a half hours later on their website, another announcement stated Prometric’s plan to cancel a significant number of exams but provided no concrete information on when students will be notified if their exam gets canceled. Prometric has stated that some individuals might not receive notification until 48 hours prior to their exam. With those that do get canceled, they might not be able to reschedule their exam for months due to backlogs. Keep in mind, all of this occurred less than 24 hours after the USMLE announced the resumption of testing on May 1st.

In regard to recent changes, it is the Step 1 exam that seems to be creating the most noise on social media. A test initially designed to assess medical students’ basic science knowledge has turned into a fate defining nightmare whose importance cannot be understated. According to data from the National Resident Matching Program, the Step 1 exam score is one of the top factors used to rank the competitiveness applicants. It also determines the type of doctor one can become, and for students, a lower score can prevent them from pursuing their dream career. Now, after many had their exam canceled in March/April and uncertain if they will take it in May, it is no surprise students are in distraught as the USMLE tosses around Step 1 like a college pop quiz. They are torn between using up their study resources to then have their exam canceled, or saving some resources and risk being less prepared if the exam does not get canceled. It is a lose-lose situation.

The USMLE is not the only testing group impacted by the new hurdles with COVID-19. Solutions other than ignoring the issue are available but, the USMLE seems to be proceeding with none of them. For example, exams like the NCLEX and MCAT have been shortened in order to accommodate more exams per day under social distancing guidelines. Others, such as the SATs or Advanced Placement exams have allowed for tests to be taken at home. Understanding this might be unfeasible for Step 1, medical schools have offered to proctor exams. The USMLE has said for the past month, “we are looking into it.” Lastly, what would be following the lead of many Universities, Step 1 could move to pass/fail. This seemed to be most plausible as the USMLE announced in February its move to pass/fail in 2022. Instead, they callously posted the statement below back at the beginning of April. 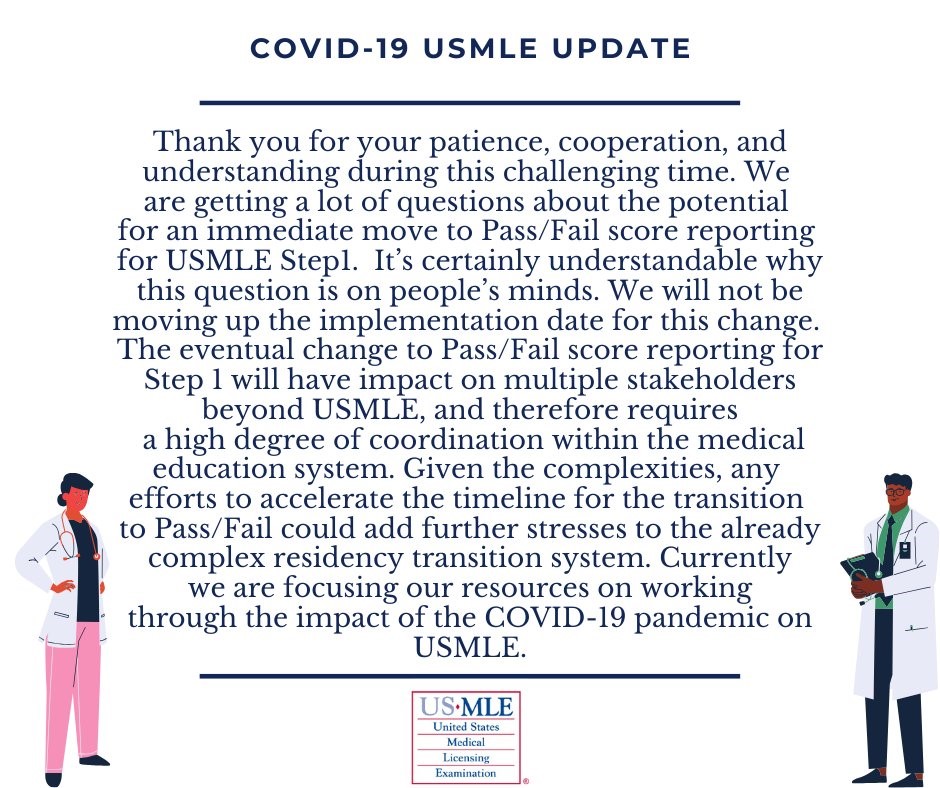 Albeit there is debate surrounding the move of Step 1 to pass/fail, but I have to ask the USMLE: Who are the more valuable stakeholders than medical students? Students spend $645 for the test, roughly $400 for a question bank, $60 per practice test, and even more money on other study materials. Finances aside, they have invested their lives into this exam, and this response is no more than a slap in the face. Their futile responses cowardly place the burden on students/medical schools in a pathetic attempt to avoid accountability. Though, It would be remiss not to mention the generosity of the USMLE and NBME. In response to the pandemic, they removed all rescheduling fees and provided old, no longer predictive, practice exams free of cost. A laughable gesture at best.

Ultimately, the bigger expense being foregone is the mental health of students. Step 1 already strains students; now combined with a pandemic, the conditions have worsened. Both students, and shockingly medical schools, have been on a rollercoaster of uncoordinated communication and generated mistrust towards the inept leadership of the USMLE. Their failure to act on any solution greatly showcases their disregard for the welfare of medical students. For a system that has been heavily criticized for poor mental health support and physician burnout, the USMLE should be embarrassed for agonizing the problem. In addition to mental health, there remains anxiety around the risk of getting COVID just to take an exam. Although “non-profit,” the USMLE appears to be profiting at the expense of vulnerable medical students. The USMLE has failed the medical education community, and subsequently, future patients, as medical students will undoubtedly have irreplaceable damage from this experience; however, like all tests, it is possible to learn from mistakes and improve. In these unprecedented times, we as students understand the need to be flexible, but in return, we ask not to be forgotten and left abandoned by the USMLE. Let us work together, find solutions, and move onward.

Colin Quinn is a medical student.

Doctors, how are you holding up? You could answer in one of 5 ways.