As the gentle rumbles of thunder became increasingly sonorous, the sharp crackles of lightning casting out the darkness of night, striking like the angry whips from a scorned martinet, and the torrential rain now cascading down from our awning like loose waterfalls, making heavy splashes around us every few seconds, I could taste the intoxicating smell of petrichor laced with pot in the air. All the while, we gathered around in musical revelry to Justin Timberlake’s arrangement of “500 miles” being performed on the guitars of a couple of Vietnamese strangers-turned-friends whom I had just met in the last few days who I can only describe as being the wandering, liberated youths of a modern-day Woodstock generation.

It was here, atop an endless acclivity of emerald-green tiers leading to the summit of an agricultural mountain in the breathtakingly rustic town of SaPa, an idyllic land of limitless alpine terrain tucked away in the northcentral-most region of Vietnam, that I sojourned for three days and came face to face with a bunch of former vagabonds who had made this mountaintop their humble abode. It was also here, at the freshly minted age of 25, that I came to conceive of something so spectacular and life-changing that I can only describe as the “mountainous perspective” (a personal protologism I created to capture it) which, right now, is more germane to the human condition than ever.

When I initially arrived here in the early days of May 2019, I was quickly greeted by “Cookie,” one of the 20-something-year-old Vietnamese drifters who had completely abandoned their former lives to begin new ones with like-minded souls. Upon meeting Cookie, I immediately noticed a rather disarming quality about her resting facial expression and unrestrained smile. It was as if she were looking into me as opposed to at me, and her shiny metal braces, slightly unkempt hair, imperfectly fit eyeglass frames, and oversized tattered garments imparted an almost naïve quality to her aura. Little did I know at the time that this total stranger would eventually become the catalyst for a very personal rite-of-passage thus far in my life’s journey.

She embraced me with the tenderness that only a sister could provide and the warmth that only a mother could offer, and instantly I felt a connection with someone who was worlds apart. Though we seemingly had nothing in common, our minds, hearts, and spirits somehow transcended these differences and conversed in a lingua franca. Cookie could tell that I was a lost soul seeking refuge and self-discovery, and she, an experienced wanderer ready to confer upon me and every traveler that would come after me the very secret that freed her from the pain she had once felt herself that she saw so clearly in my eyes.

I always believed the shortest distance between two people is a story, and so while sitting alone and across from her on a bench one afternoon I asked in rapid-fire succession, “Aren’t you sad about being away from your family for so long and having started a completely new life with no long-term plan? Have you ever been stressed or angry or upset about your own existence since coming here? Does living this way truly satisfy you?”

But before Cookie could answer in words, she looked at me with the kind of far-away gaze that tells you everything without saying anything. She slowly turned her head sideways and stared out into the bucolic valley and mountainous backdrop in the distance, squinted her eyes ever-so-slightly, then shut her eyes, let out a gentle but deep, heavy sigh, opened her eyes again, and simply smiled.

That was when I knew.

There is a phenomenon that astronauts have been noted to experience called the “overview effect,”  understood to be a cognitive shift in awareness that some have reported by viewing Earth from outer space. It would seem that one’s perceptual field becomes exponentially more macrocosmic, and suddenly there is a unity, coherence, and universal interconnectedness to things that may have otherwise appeared disjointed prior. Moreover, even the things in our day-to-day lives that could be a harrowing monstrosity of a problem (e.g., personal failures/adversity, lost loves) suddenly lose some or all of their negative influence and significance. The emotional tethering of our fettered mind all of a sudden begins to dissolve. From this “orbital perspective,” I extrapolated the concept of a “mountainous perspective,” whereby similar spiritual thoughts and feelings about a single system of interrelatedness and oneness that was previously imperceptible come into the realm of conscious visibility.

To me, the mountainous perspective isn’t about desensitizing ourselves to the trials and tribulations of our world or disavowing ourselves from the very things that matter to us. And it’s certainly not about renouncing our human emotions and feelings to become callous and impregnable to the plights of humanity and the iniquity of humankind.

Rather, it’s about a kind of psychological partitioning, a deliberate and proactive compartmentalization, and extrication of our spiritual selves from the tangible, the material, the corporeal. It’s about a shift in cognitive awareness whereby we selectively choose to occupy an elevated vantage point that not only holds space for all of the raw, visceral feelings we are simply not impervious to as humans, but externalizing that as something that is not of our inner selves for the time being. By doing so, we can simultaneously recognize all that is not well, all that is not perfect/ideal but still not be crippled or crushed under the weight of our mind’s perception of the seemingly insurmountable emotional turmoil and internal hardship. It’s about adding another tool and antidote to our defensive repertoire for combatting what I call the “trifecta of emotional assault”: vicarious trauma, compassion fatigue, and learned helplessness.

We don’t have to be a mendicant monk who has undergone tonsure or climb up a precipitous mountain in a foreign country to rise spiritually to an internally equanimous state of emotional unflappability and resilience. We just have to have a sense of imaginative awareness to know that no matter what happens, a picture much bigger and greater than ourselves exists. And if we can just take a huge step back (or in this case, up) to truly see the smallness of the intricate processes that besiege us in our day-to-day, no matter how bad things get from COVID-19, we can always find an inner calm. An inner peace.

People remember stories in your speech. The rest fades away. 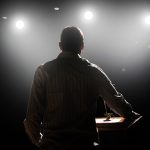