I learned to call Atlanta home after college. It was at Grady Memorial Hospital that I first shadowed doctors, and decided that I would go to medical school. Two and a half years into being an ATLien, I cried inconsolably because it was time to leave. I have since continued to yearn for the day I will migrate back South. As I contemplate where I will apply to residency this fall, I can’t help but feel as though black people in Georgia are being told “black lives don’t matter” by Governor Kemp amid the COVID-19 pandemic. He dragged his feet to enact a shelter-in-place order, rushed to reopen non-essential businesses against public health experts’ recommendations, and, as we learned this week, doctored statistics to justify the early reopening.

Reports in late April showed that more than 80 percent of people hospitalized with COVID-19 in Georgia were black. This overrepresentation of black people among people with severe COVID-19 mirrors statistics from across the country. This is even more concerning, as the Southeast is home to disproportionately high rates of chronic conditions associated with higher mortality risk, not limited to Georgia. Most black people in the U.S. live in Southern states, with Republican governors who had a similar approach to this pandemic as Governor Kemp. A recent study showed that governors’ informal “stay-at-home” recommendations via social media preceding official orders led to a reduction in mobility, with effects comparable to those of the actual orders. These effects were interestingly, the largest in Democratic-leaning counties under Republican governors. Democratic counties in Southern Republican states are disproportionately black. These studies suggest then, that Republican governors’ “stay-at-home” social media signals may have had a stronger effect on social distancing, especially in areas that are disproportionately black. Moreover, this effect could have potentially helped save more lives sooner, as epidemiologists suggest that implementing social distancing measures two weeks earlier would have prevented approximated 90 percent of U.S. COVID-19 deaths.

Juxtaposed to the federal government abandoning community-based testing, the mostly white, conservative movement pushing for an end to shelter-in-place across the country despite otherwise bipartisan support sends a loud message: Black lives don’t matter. Governors caving under this pressure may not agree in theory, but their actions speak louder. Breaking from social distancing earlier than recommended may very well lead to a second wave of COVID-19 deaths, as feared by experts around the world. Reopening gyms and hair salons means unduly overexposing disproportionately black workers to the risk of infection.

This outsized burden on black people is not new. “You have to be twice as good as them to get half of what they have,” is a familiar refrain black elders teach us (see Shonda Rhimes’ Scandal, Season 3, Episode 1). It is quite applicable in this pandemic, for instance, as black New-Yorkers are surviving COVID-19 only half as often as white New Yorkers. Pew Research Center data shows that black people support stricter social distancing measures, but twice as many personally know someone who has been hospitalized or died of COVID-19 compared to white people. We are overrepresented among several categories of people at the highest risk of contracting any near-ubiquitous airborne pathogen: people experiencing homelessness, incarceration, correction officers, people who disproportionately rely on public transportation, bus drivers, service, and hospitality workers, cashiers … The list goes on. These social conditions, products of structural racism, are direct reasons why we are also overrepresented among those at highest risk of mortality when infected with COVID-19. While age is independent of race and black might not seem to “crack,” a recent gerontology study showed that stressors black people face across the lifespan accelerates the physiological deterioration otherwise associated with aging compared to white people.

Our individual social distancing efforts, strong as they might be, cannot alone protect us from decades of racist policies, disinvestment, and abject negligence from the government. As we approach the presidential election, It is not lost on us, that black people have long been a threat to Republicans’ political fortune; hence the aggressive voter suppression tactics, like then-Secretary of State Kemp purging voter rolls ahead of his own election for Governor. Moreover, the staggering gap in life expectancy and the excess deaths of black people have implications for the electorate. According to policy researchers at Stanford University and the University of Michigan, out of 2.7 million black people who died between 1970 and 2004 because of inequality, 1.7 million would have been voting age past 2004, and 1 million would have been voters. It is hard to picture a racially just world, where perhaps, black people are not so predictably anti-GOP voters. I am too black for that. What we know though, is that in our current reality, a disproportionately high number of black deaths likely means relatively fewer democratic voters in future elections. It is thus no longer as straightforward as “black lives don’t matter” but also, perhaps, that black lives are too costly.

The economic and political costs then, of protecting us (and perhaps surprisingly, everyone else!) from COVID-19, is seen as too great a loss for those who may feel invincible. The sense of security that shopping mall dwellers in Alpharetta, GA, are enjoying is built on a fallacy. “When you start seeing where the cases are coming from and the demographics — I’m not worried.” one said to a Washington Post reporter. These shopping mall dwellers, too, may become sick from coming into contact with the virus while shopping. White protesters and shoppers are risking their lives in the name of freedom, and black retail workers are forced to risk theirs in exchange for their livelihood. The calculus is not the same, but in the end, white lives are at risk, too, even if the risk is not evenly distributed. Atlanta’s Mayor Keisha Lance Bottoms said it best: “If we’re not alive on the other side of it, then there won’t be a recovery to be had.” That includes white people too.

Max Jordan Nguemeni Tiako is a medical student and can be reached on Twitter @MaxJordan_N.

5 reasons why your anesthesiologist is a medical ninja 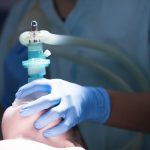