I have cared for them both, husband and wife, now in their 80s, for almost 20 years. She is a retired nurse and him from his business. They are so typical of this “greatest generation”: tough, enduring, hard-working, deeply faithful, fervently independent, those characteristics that allowed them to survive the Great Depression, World War II, and the many challenges that come with life. They have seen their share of joy but also experienced much pain, especially the unexpected death of a child. But now they are facing their greatest challenge and I am intimately involved in it. They are dying: she of Alzheimer’s and he of severe pulmonary fibrosis; each one’s life slowly ebbing away in a way unique to their disease.

It is hard, very hard, to watch this unfold though I have been here many times, too many times, with other patients during my many years as an internal medicine specialist. Caring for those going through the dying process is always difficult and emotionally draining. Over the years, many become a blur, and the memories fade. But occasionally there comes a special person, or in this case, couple, who you don’t forget, whose life, and all that it encompassed, becomes intimately entwined in yours.  There is often a final event as well that is etched forever in your mind and touches your soul. That event occurred just last week. It moved me to tears, yet, strangely enough, brought joy as well.

He was in with a care provider from his new home where he and his wife had just moved, an assisted living facility with an Alzheimer’s unit. He was no longer able to care for her as his lung disease and increasingly frequent hospital admissions were paying an irreversible toll on his body and remaining strength. He required 02 continuously, and this once strong man now can only walk 15 to 20 feet before having to stop and “catch his breath.” So he made the decision to break up their home of 60 years and move into their new “home.” He did not want anyone else to make this decision for them. It was the one thing he could do that would also ensure his wife would be cared for even though she did not understand why this was happening. It was hard, terribly hard. In their new home, she was not able to stay with him. Her increasing agitation, combativeness, and paranoia precluded this. She had to remain in the “unit.” Alzheimer’s does far more than take away ones’ memory.

I had not seen him in several months. Fortunately, he had not had a repeat hospitalization, and medically he was “stable,” a good word in medicine. He was noticeably thinner and weaker. There was sadness in his voice, his eyes, and his demeanor that I had not seen previously. We spoke about his health issues and what, if anything, we could do. By any clinical standard, he was depressed, and I had already addressed this. All I could see, though, were the tears brimming in his eyes. All I could hear was the trembling of his voice. All I could feel was the profound sadness permeating the room as he told me how difficult this move had been, how hard it was to see “the love of his life” in such a way.

What do you say or do? I did the only thing I could do. I took his hands in mine, hands tough and calloused, that had done and felt so much in a lifetime, and I prayed with him. We had done so many times over the years. As we finished, tears streaming down his face, lips trembling with emotion, he said these final words, “I love you.” Then he slowly stood up, hugged me, and left. As I watched him move painstakingly down the hall, walker in hand, oxygen at his side, my eyes filled with tears – tears of sadness and sorrow. Suddenly, I found myself grateful that I was in a profession that allowed me the privilege of being intimately involved in the lives of people; the good and the bad; the joyful and the sad. When all has been done medically, then the real art of medicine begins, the warmth of love given through touch and the speaking of words, “I love you”: final words that are a precious reminder of why I went into medicine.

Health care workers: What do you need? 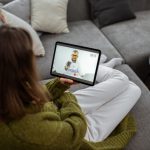