The day began in Mom’s room with a 10:00 a.m. conference at Upper Valley Medical Center, west of Columbus, Ohio. In attendance were my 93-year-old mother Joanne (now in her third week of hospitalization), her palliative-care nurse Richard, her Episcopal priest Mother Nancy and myself.

Mom was on high-flow oxygen therapy delivered through a nasal cannula. Despite this, her blood-oxygen levels were well below normal. Clearly, her lung function was declining. Her heart wasn’t pumping well, and her blood pressure was barely seventy over 50.

Things can change quickly with our elders. Thirty days earlier, Mom was going to dinner with friends and taking excursions in her assisted-living facility’s van to pick up things she needed, including small bottles of wine to share with “the girls” at dinner.

Five days ago, I’d spoken to her about hospice care, and she would have none of it. Now, tentatively, I said, “Mother, it seems that you’re not doing well with the medications. I wonder if it’s time to think again about hospice.”

Richard asked if hospice was OK with her. Mother pointed to me and said: “What he said.”

This was consistent with what she’d intimated to my son Christopher and daughter Kate a day or two earlier: It was a decision that Mom wanted someone else to be in charge of. So I took charge.

As a hospice chaplain, I’ve said prayers over thousands of recently deceased people, as well as praying with the dying and their families. I’ve felt very aware that every time I said death prayers over someone, I also saw myself, my wife, my kids, my folks lying in that bed. None of us gets out alive. What I hadn’t seen was myself making the hospice decision for a parent — and yet, thanks to my previous experience, the process had an inevitability and familiarity, which kept me feeling that my feet were touching the bottom of the pool.

We filled out the hospice documents, and Richard left. It was time for communion. I asked Mother Nancy to use the full-length bedside communion service rather than the quickie service that’s often used, and she was totally on board.

As she heard the familiar prayers, Mother, a cradle Episcopalian, mouthed them along with her priest.

At 1:30 p.m., she was transferred down the hall to the hospice pod.

Those of you who have experienced hospice pods know what I’m saying when I say that entering a hospice pod is an epically calming experience.

<p “Why don’t you go and get lunch?” the nurses suggested to me as they began admitting Mom. “We’ll continue her oxygen and place a Foley catheter, so it will take a while.”

I found the cafeteria and selected a cardiologist-approved bean burger, a bag of reduced-fat chips, and a bottle of sweet green tea. I took them to the hospice family room, polished off the chips and burger, and headed back to Mom’s room.

Somewhat unexpectedly, once Mom was comfortably settled, friends from the church and the old neighborhood started showing up. She was thrilled to see so many familiar faces in the room. She also noticed me drinking from the green tea bottle.

Good Episcopalian that she is, she asked, “Is that scotch you’re drinking?”

“No, green tea,” I said. “I’ll be pounding down the scotch once I’m back home in Westerville.” Little did I know.

The Foley catheter may have been giving Mom bladder spasms because she kept saying, “Jeffrey, I have to tinkle.” The visiting family and friends took turns reassuring her that she wasn’t going to wet the bed, but she kept voicing this fear. She was shifting back and forth between mental clarity and confusion, and it felt frustrating when she moved into the fog.

“I must have missed the day at Son School when they taught how to explain an indwelling catheter to a selectively delirious mom who’s worried about soiling her deathbed,” I told one nurse. She may have smiled.

By 4:00 p.m., fatigue was creeping up on me, and friends and family had departed, so I grabbed a nap in the chair next to Mom’s bed. I woke up about 4:30 a.m., and Mom appeared to be sleeping. I picked up my coat, started to walk out — and she opened her eyes.

“I’m going home to Westerville,” I told her. “I’ll be back tomorrow.”

“Jeffrey, I have to tinkle,” she said.

“Do you remember what everyone was telling you?” I asked.

Her nurses were at the desk, and we began to swap hospice stories. We were still talking at 5:00 a.m., when the respiratory therapist showed up and went into Mom’s room.

“Get in here!” she called out.

Coming in on the run, we saw Mother lying diagonally in bed, her head to one side. She was ashen. The therapist moved the high-pressure cannula from the bedside table to Mother’s nose in the hope that it would make a difference. It didn’t. She was dead.

We think that she pulled off the cannula and put it on the table, then sat up in bed, intending to go to the bathroom. Sitting up created orthostatic hypotension — a sudden drop in blood pressure that takes place when a person stands or sits up quickly. When her already low blood pressure plummeted, she fell back across the bed and, without the nasal cannula feeding oxygen to her lungs, she died of oxygen deprivation.

At one time or another, most of us have said, “I don’t want to be hooked up to a machine prolonging my life.” This was what it had come to with Mom. Her quality of life? Well, right up to the end, she loved having people around her and knowing that so many people cared.

As mentioned, I’ve said death prayers for well over 2,000 recently deceased persons. This time was different. It was incredibly hard to say them over Mom. “Into your hands, oh merciful savior…” I don’t usually choke up, but I had to stop a couple of times.

With most deaths I’ve attended to, the deceased seem to die with their eyes open. Mother died with her eyes closed. The hospice nurses made it a point to tell me how peaceful she looked. They’re convinced that her death was a peaceful passing.

Jef Gamblee is a minister. This piece was originally published in Pulse — voices from the heart of medicine.

Has health care lost its humanity? 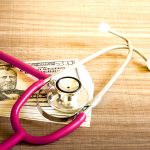 How the administrative burden contributes to physician burnout 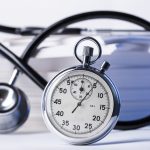