Four years ago, there was legitimate concern over Hillary Clinton’s health. Between her coughing spells, facial tics, stumbles and falls, not to mention her prism glasses and inability to hold more than a few campaign events per week, it wasn’t at all clear that she was up to the rigors of being president.

Now it’s Joe Biden and his red eye-raising red flags over his health. His so-called gaffes are well chronicled by the media who attribute them to simply “Joe being Joe.” A few recent misstatements include Biden thinking he was vice-president during the 2018 Parkland shootings, confusing Theresa May with Margaret Thatcher, and thinking he was in Vermont while campaigning in New Hampshire.

Is this simply folksy Joe tripping over his tongue? Or are these early symptoms of dementia, defined by the Alzheimer’s Association as, “An overall term that describes a group of symptoms associated with a decline in memory or other thinking skills severe enough to reduce a person’s ability to perform everyday activities”?

Biden also had two brain aneurysms successfully treated 31 years ago. Coincidentally (or not), 31 years ago, Biden dropped out of the 1988 presidential race over charges of plagiarism. Myriad changes may occur after aneurysm-clipping, including physical, emotional, and cognitive deficits.

Are Biden’s ongoing gaffes and inappropriate hair smelling and touching of women and young girls due to early dementia or deficits from his aneurysms and subsequent repair? Overzealous touching of women is clearly not acceptable behavior for a “#MeToo” promoting Democrat. Are inappropriate judgment and behavior a legitimate concern for a potential President Biden?

Every time President Trump tweets or hits back against media attacks, his mental health is questioned. A group of psychiatrists expressed concerns over Trump’s “psychotic-like state,” yet they are inexplicably silent over Joe Biden’s far more concerning behavior. Trump is simply reacting to a monopolistic media almost uniformly against him, unlike Biden with his media apologists making excuses for his bizarre behavior.

The latest concern is over Biden’s red eye, which occurred during a CNN town hall on climate change. As the Daily Mail reported, Biden’s “eye filled up with blood” while he was in the middle of speaking. Unlike the sycophantic U.S. media, the Daily Mail raised some legitimate concerns, writing, “Biden, 76, has already been facing questions over his age and health amid a string of verbal gaffes.” It added, “Biden also has a long history of health issues, including multiple aneurysms.”

A former CNN CEO dismissed these concerns, saying, “Biden is a storyteller.” So is Dr. Seuss. Is Biden the “Cat in the Hat” or the “Lorax”? Trump is never referred to as a storyteller. CNN’s Brian Stelter said of Trump, “He is getting worse. We can all see it. It’s happening in public. But it’s a very hard story to cover.”

Why would Biden’s eye suddenly bleed during the climate change town hall? His eye didn’t actually “fill with blood,” as the Daily Mail claimed. Instead, he developed a subconjunctival hemorrhage, bleeding just under the thin surface membrane covering the white portion of the eye.

This type of hemorrhage is usually due to eye rubbing, ocular trauma, or vigorous coughing or sneezing, none of which Biden was doing when he was on stage answering a question about fracking. Such hemorrhages may be a sign of a bleeding tendency, ranging from a clotting disorder to overzealous anticoagulation. The 76-year-old Biden has not disclosed his medical history since 2008.

Does Biden have a blood disorder? Is he taking anticoagulants as Clinton was in 2012, following a life-threatening blood clot near her brain?

Is he in the early stages of dementia?

Voters should be very concerned. Is Biden’s state of mind due to his previous aneurysms, his age or early dementia? Is a spontaneous subconjunctival hemorrhage, just “Joe being Joe” whatever that means or a sign of more serious disease? Are these legitimate questions to ask? Is the New York Times or the Washington Post asking?

If he is the nominee, as many current polls suggest, how will he fare next summer during the rigors of a presidential campaign? Trump will be in energizer Trumpster mode, holding several campaign rallies each day. Biden may be in Clinton mode, holding a couple of rallies a week, at best. Will he become increasingly absent-minded and disoriented under the glare of a presidential campaign?

The media is uninterested in Biden’s state of mind, instead fixating on Trump’s hurricane forecasting. For that reason, the campaign itself may provide the final answer as to whether Biden is up to the job of president. At this point, the odds are not in favor of “red-eye Joe.”

Doctors aren't gods. They need God to help them. 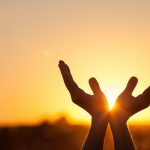 Discovering resolve: a trainee's thoughts on advocacy and the crisis at the border 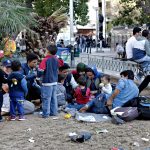