Clutching my duffel bag under my rain jacket, I dash from my truck toward a house that was built by Frankie, the man I’m here to give the last massage of his life.

I’ve been massaging people since I was five and have been a professional massage therapist for 40 years. I don’t make house calls anymore, but it’s an honor to give a man the last massage of his life, so here I am. My parents were ill when I was a child — my mother was an alcoholic, my father had severe emphysema — and being raised around pain and sickness taught me that there’s always something I can do to make a person more comfortable.

I like Frankie. He’s the ex-husband of a longtime client and friend.

Though I don’t know him well, I do know that he was a builder, a therapist, and the director of a spiritual center. I visited this house once, 30 years ago, when he hired me to give my friend a birthday massage. I don’t remember the property being so stunning. Even through the sheets of rain, I see a spectacular view of thick mists and vapors swirling over the nearby Catskill Mountains.

I knock on the front door. It opens, and without a word, an imposing woman, Frankie’s home health aide, ushers me downstairs, past the den.

Looking in to say hello, I see Frankie before he sees me. He’s bald, his eyes are closed, and a long tube leading to an oxygen concentrator loops over his ears, with the cannula up his nostrils. The machine’s click and hum is the only sound in the darkened room.

Frankie’s lean body is hidden in a soft gray sweatsuit that could easily fit two of him. He looks propped up and ready, but also completely exhausted. Two months ago, while recuperating from a liver biopsy, part of his battle against lung cancer, he traveled to my home office for a massage. Since then, he appears to have lost a third of his body mass. He’s mostly bones and muscle and soul.

The aide leads me into the living room and goes to rally Frankie as I assess the surroundings: two twin beds (one a hospital bed) and piles of health-related paraphernalia everywhere. I see a handwritten list of instructions from Frankie’s wife, telling the aide how to respond when people call asking to visit. When so much is beyond control, it’s an attempt to control something.

I empty my duffle and spread a soft blue flannel sheet over the bed. On the nightstand, I line up my anti-inflammatory creams and pain-relieving oils. Frankie’s wife brings him in. The aide sits him on the bed, removing the oxygen hose to pull his T-shirt over his head. Oxygen back in place, we ease him down onto his back.

I cover him quickly so that no more body heat will be lost and use the bed’s controls to raise his head and knees. He smiles at me.

“Thank you for coming,” he says, then shuts his eyes.

“Come find me when you finish,” his wife mouths, pointing to a door on the landing above us. Noticing how puffy her eyes look behind her glasses, I put my hand over my heart and nod.

She smiles and goes upstairs. I take a deep breath and begin.

Massaging Frankie, I reunite with him through my hands, remembering the way his muscles and bones respond to my touch. I lean in, going deeper to find the places that hurt.

Within minutes Frankie’s breathing slows, and he drifts off to sleep. My fingertips tingle with the increased connection this allows. This is the gut-wrenching and glorious part of my work, where I let myself become a tool his body can use to ease or correct whatever it directs me to feel or sense. I surrender to the moment, breathe deeply, and shut my eyes.

Never have I given the same massage twice. Each is unique; every body speaks a different language. Sometimes I see visual images; other times I feel physical blockages. When a person trusts me enough to let go like this, we become fellow explorers. Some part of us connects; a new circuit is created, and my fingers move into the course set for them.

My hands become very warm, and images surface. I see Frankie operating a backhoe, maybe building this very house. Then the view from a podium out onto an audience of attentive faces, perhaps one of the hundreds of workshops he led. Next a lone stretch of beach, maybe in Mexico where he used to hold retreats. I rest with that image, willing the healing powers of the mighty ocean, and brilliant sun to touch us now. That image is replaced by a handsome, dark-haired Frankie wearing a black turtleneck, a cigarette dangling from his lips, shooting a game of pool, followed by an image of a young Frankie, a single tear coursing down his cheek as he holds a tiny baby (his daughter, I imagine) in the crook of his arm.

Frankie is dying. That may be the only way relief can come. Having been a hospital chaplain, I’ve often been the only one in the room holding somebody’s hand as they breathed their last; but I won’t be here for Frankie’s death.

As a teenager, I wasn’t with my mom when she died of alcohol poisoning during our vacation in Greece, because the doctors had insisted that I leave the room. Less than a year later, my dad died from pneumonia after battling lung cancer; I’d left his side to use the restroom. Their sudden deaths — that permanent, gaping hole — nearly felled me. Not being in the room when they died compelled me for years to be there for anyone I could, although after decades, I’ve let myself off the hook, realizing that I don’t have to be the one physically sitting there.

Frankie’s breathing is steady. I slather arnica cream on my hands and move to the head of the bed. Gently I rest my hands on his shoulders and begin to knead his taut muscles. He groans. Shutting my eyes in order to “see” only through touch, I work the complicated musculature of his neck and his magnificent skull, allowing my fingers to release each fissure between the skull plates.

I feel him stir, now fully awake. A small smile lifts the corners of his mouth as I tuck the blankets around him and move to his feet.

On it goes, this conversation between a man, his worn-out body, and me. After years of touching the dying, even when they can’t hear or see me, I have to believe that they still feel love through my hands. Touch transcends the other senses, especially when the dying may have lost their mental moorings and themselves. For me, touch is sacred.

I survey Frankie’s bony but flexible feet, his calves, thighs, buttocks all flawlessly defined, his hands (slender now, but still strong), and his sinewy arms with their ropy muscles — all so breathtaking, so perfect. I am entranced by the sheer beauty of his body. It’s as smooth as marble. At this moment, it does not look ravaged by cancer or chemotherapy. I’ve seen this look before in other patients, this temporary scrubbing away of misery. Frankie looks young and refreshed.

He must sense this reverie; for he opens his eyes and says the only thing he’s said this entire hour.

Julie Evans is a massage therapist and an ordained deacon. This piece was originally published in Pulse — voices from the heart of medicine. 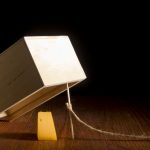 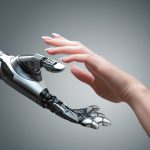