Reading the headlines in the morning newspaper lately can downright depressing. It was with that feeling that I recalled three conversations I had recently with people who have various cancers. And I realized that despite all the chaos around us, maybe it’s time to say something in praise of hope.

Hope is very real, especially when you or a loved one or someone you know is diagnosed and treated for cancer. Hope is that to which we cling to get us through the difficult days and weeks. Hope is what keeps us looking forward, hope is what we pray for.

We know hope itself cannot change the physical world. It can’t create success. If it could, no patient would ever succumb to this dread disease. However, for the three folks I spoke to, there are very real reasons to be hopeful.

One was a person who had previously been treated for cancer, and now had a new and different cancer detected. Biopsies of the tumor did not result in a diagnosis beyond an undifferentiated cancer. What treatment to offer was uncertain. The outlook was grim. Then a consulting physician suggested doing a genetic analysis of the biopsy, and lo and behold: a genetic “signature” was found that is strongly associated with another very rare type of cancer. A type of cancer that is treatable. Treatment was adjusted, the cancer is responding. Hope.

Another conversation was with someone seeking counsel to resolve conflicting treatment recommendations about their cancer. As we wrapped up our chat, I asked about their family. Turns out their spouse had a GIST tumor diagnosed in the early in the 2000s. GIST is another rare cancer that used to be almost universally fatal.

Following surgery, they were placed on imatinib (Gleevec), a drug that had been recently approved for the treatment of chronic myeloid leukemia and was also found to be effective in the treatment of GIST tumors. We had no clue back then whether it would be effective in keeping the cancer at bay after surgery. They remain on imatinib to this day, doing well and tolerating the drug. Once again, hope.

The third “conversation” was an email from a lung cancer survivor and personal friend who almost five years ago had widespread metastatic disease, including in the brain. Included in the email was a recent magazine article about her and other lung cancer survivors. At the time she was diagnosed she had a genomic test done (not a common procedure at the time) and the cancer was found to have a rare lung cancer mutation called ROS1. She started on an experimental drug (which is now approved for more widespread use), and remains alive, well, and expecting her first grandchild in March (a doting grandmother to be sure, as early signs suggest). Again, hope.

So let’s take a break from all the blaring bad news, and praise hope. For these three and so many more, there is so much more hope than we had in the past. Let us never forget that hope is all around us. As I learned from my own experience, we should not forget to seek it. 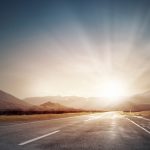 Take a break from all the bad news, and praise hope
1 comments