An excerpt from Hindsight: Coming of age on the streets of Hollywood.

During my medical school clerkships, an attending recognized a truth within me that I’d hidden for many years. Just a few hours into my pediatrics rotation, the attending asked me, “You had a rough childhood, didn’t you?”

I was astonished. How had he known? I asked him, needing to know what gave away my most deeply kept secret. And he said something that surprised me. “You don’t react. When patients tell you about risky behaviors, you treat them like regular people and just keep talking to them. You don’t look shocked by anything they say.”

I accepted his insight and started to notice how different my interactions with patients were. That secret part of me led to a deep, intuitive understanding of patients who were often unseen and unheard. Because for much of my early life, I was not seen or heard by people who I desperately needed to have protect me. I spent several years as a homeless teen in Hollywood before my life finally stabilized, but the scars remained.

That part of who I once was is what carried me forward and helped me advocate for invisible patients throughout my remaining clerkships and residency training. Now, as an attending physician, I have chosen to share my story with the world, in hopes of helping to give a voice to the voiceless. I’ve been fortunate to share this book with many physicians and healthcare workers, and numerous colleagues have told me that my story has changed how they interact with some of their least fortunate patients.

It is when we truly see the world through the eyes of our patients that we can help eliminate barriers to care and walk alongside them towards healthier, safer lives.

Thank you for allowing me to share my journey with you.

I struck a match, watching the flame burn and sizzle before it went out. Red to orange to white to black smoke. I stared for a moment, then pushed the hot ember against my arm.

My skin turned red, then blanched. I felt nothing.

I closed my eyes, allowing myself to fall back asleep on the bus bench.

When they reopened, I saw the sky had changed. It was dark now. And a man was seated next to me.

“What’s up, Red?” I turned to look at him, sizing him up in a few short seconds. He was dangerous.

“Nothing,” I mumbled. I allowed my vision to focus on the few cars passing by.

“Want to go for a ride?” he asked. I noticed a sedan pass by and recognized it. It had circled past a few times since I’d awoken.

I stood up. I quickly secured the backpack strap over my shoulder. “I’ll walk.”

The man stood up as well. I turned to the west and began to walk. He fell into step next to me.

Danger. My senses buzzed. I had to get away.

I continued walking at a brisk pace down Sunset Boulevard. He kept offering his ride, and the car passed by us every few minutes.

“Where are you going, Red?” he asked me.

I shrugged. “The beach.”

“I’ll keep walking with you. If you don’t mind.”

“I do mind,” I said, picking up the pace. The only people out on the streets of Hollywood this late were up to no good. Or hiding from it.

“It’s not too far,” I said bravely. My words had to remain strong; confident.

We kept up the charade for at least four miles. I noticed the change in scenery as we transitioned from Hollywood to West Hollywood. I was a moving target. If I stopped, anything could happen.

And then I saw the gas station, diagonal from me. Daylight was coming. My legs felt heavy. I knew I had just this one chance.

I timed my steps with the streetlight ahead. We crossed the street, and immediately I pivoted into a different direction to make it across the Boulevard. He was close enough to grab me, but he hadn’t expected me to change course.

My walk became a run, and I raced into the convenience store at the gas station. The bells jingled from the door as I entered.

The store clerk glanced up from behind the counter. There was a look of indecision on his face; would he protect me? He saw me, then my pursuer.

The man entered the store and saw the store clerk picking up the phone. He quickly turned around and left. The sedan pulled up and took him away, just moments before the police car arrived.

I stared at the officer. “What happened?” he asked.

I froze. Old hoodie, faded t-shirt, secondhand jeans. Well-worn shoes. Backpack. Wild red hair. Everything about me screamed who I was.

No, no, no. I was so close to adulthood. Why was it so hard to be seventeen? If I had been eighteen, I could stand tall and tell him the truth. But at seventeen, I was out of place. Free but not quite. Always chained to that number.

He asked me to join him at the station. I felt beads of sweat rising on the back of my neck as I sat in the back seat.

He walked around to the driver’s side and sat down. “Are you okay?”

I waited for him to open my door and fumbled at getting out.

He led me inside. We passed a reception area and I followed him to his desk. We both sat down. He logged onto his computer before turning back to look at me.

“Sheri,” I said softly. This was it. I clasped my hands together, trying to make them stop trembling.

I looked up at the wall, noticing the pictures of this officer and his family. Pretty wife, cute kids. A normal family. “Seventeen.”

I unzipped the backpack as little as I possibly could and pulled out my wallet. When I opened it. I saw the worn edge of my North Carolina driver’s license underneath my bus pass. I started to reach for the license, but my hand stopped.

I pulled out the bus pass and quickly closed the wallet.

He looked at it closely, confirming my name.

I looked at him, my eyes brimming with tears. Please, they pleaded. I glanced back at the picture of his happy family. That teenaged daughter of his would never have to fall asleep on a bus bench. That little boy of his would never be sent away to foster care.

We both knew I had been pursued by a bad guy. He stared at me, and perhaps really saw me. I was terrified.

Those eyes, so very knowledgeable and concerned. He slid the bus pass back to me. I thought to myself, he was probably an excellent father.

“You’re up very early for school.” He lifted an eyebrow, inviting me to follow his lead.

My pulse quickened. Yes. School. I had a school bus pass. I nodded.

I stared at him, not sure if this was really happening.

I swung the backpack over my shoulder. My feet carried me behind him as we walked down the hallway, towards safety. My heart screamed thank you, but the words could not be spoken aloud. The meaning behind them might make him change his mind.

Safe. But danger was never too far away.

Medicare for all will kill jobs. But it may be necessary. 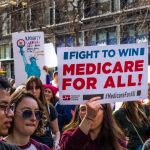 Pay people for their kidneys? It's time. 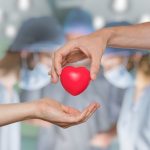