I loved my endocrinology block in medical school. It was one of my favorite units. One hormone acts on another gland, which either induces a positive feedback releasing its successor hormone or a negative feedback blocking its predecessor. It was step-by-step. It was straightforward.

I loved the material so much that I reached out to an endocrinologist to shadow her. I wanted to see the power of what we were learning applied to patient care. I’d always known that patient care was what truly motivated me. And the night before I was set to shadow, I had somehow found it in me to learn everything about the thyroid, the adrenal gland, and the pituitary. If there was a chance that a patient could have such a condition, I wanted to understand it.

The next day, the physician showed me the blood work for her first patient. The patient had a pituitary tumor. She recently had surgery to remove the tumor and now the endocrinologist was monitoring her hormone levels to ensure that the gland was functioning normally. More so than anything, I wanted to see her blood work. I wanted to see her cortisol and her T3/T4 levels, two hormones essential for metabolism that could potentially be affected by a pituitary abnormality. In class, we had learned how to assess blood work and how to diagnose common endocrine conditions reading such numbers. It was like a puzzle, and the thrill of correctly diagnosing a problem could be enthralling.

When I went into the patient room, I found myself before a 70-year-old lady. She had a tender smile and still retained some of the blonde in her graying hair. She looked contemplative as we entered the room so the physician asked her about what was on her mind. She was having trouble sleeping. She was losing her hair. The effects of menopause were still wearing on her after all these years. Despite this, she preserved a sense of youthful effervescence that can often escape folks my own age. She’s a retired nurse herself whose eyes lit up when I was introduced as a medical student.

I walked out of the room a bit taken back. While the lab results were the only thing on my mind, it became clear to me that there was much more going on in this patient’s life than just one condition or one test result. The lab values can only tell you so much. They give no sense as to what someone’s personality is like, what they are worried about, the kind of encouragement they can provide to you as a student.

The next patient I saw had a thyroid disorder with low TSH. When the patient came in, she complained of feeling hot, overheated and levels of anxiety, all classic symptoms of hyperthyroidism. I had read these symptoms countless times taking practice problems, and in the context of those problems, I formed a mental connection between being overheated and having anxiety with hyperthyroidism, a means towards an end. But these symptoms, when I saw them in the patient before me, were an end in itself, a cause of pain and distress, a source of suffering. We talked about her condition, how to manage the symptoms, and then the physician asked the patient about her upcoming plans for the weekend. She laughed about the upcoming Super Bowl. She and her husband were going to her mother’s house. It was a yearly tradition. Her mother made the best pasta, and her husband, a die-hard Eagles fan and an Italian, was going to cry no matter the outcome.

The last patient was a diabetic. His glucose levels were high. To confound the matter, he also had liver failure resulting from alcoholism. When we walked into the room, I met a lady who introduced herself as the patient’s ex-wife. I did not know what to expect going in to see this patient, but I admit that I did not expect the best.

And yet this patient encounter surprised me in every possible way. Although the ex-wife was no longer married to the patient, she had managed to help him keep a food log of every meal the patient had eaten the past two weeks since his most recent appointment. With her support, the patient had made noticeable improvements in his diet. They had been taking walks together to ensure he was getting in the adequate exercise.

“Meeting her must have been the best thing that’s happened to you,” remarked the physician.

They both blushed. Whatever had happened between the two of them, you could tell that she still deeply cared about her ex-husband’s well-being. And that he had a sense of appreciation for her support. In all of the messiness within this patient’s life, there was still a string of love perforating through an imperfect space.

In medical school, our primary identification of human beings becomes their diseases, their test results, and their symptoms. It consumes our understanding of our patients. As physicians in the medical world, that is our job. And yet, we so easily forget that these patients have so much going in their lives outside of what we think is most important to them.

We don’t deal with diseases that happen to inhabit within a human being, but human beings who happen to have an unlucky condition. That subtle difference can dictate our interactions with our patients – it can also shape what we learn from our patients. 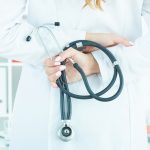