Everybody looked at me at once. I tried my best to maintain a confident outer appearance. But I’ll admit, I was caught off guard. I thought back to my attempted IV insertions throughout my anesthesia rotation earlier in the year. I struggled with getting the IV line smoothly into the vein. I followed all the techniques to a tee, watched numerous YouTube videos about it and attempted it at every opportunity throughout my training. But somehow I just never got to see that salient red gush of venous blood pour into my IV line.

While it was embarrassing to fail in front of my superiors in the operating room, at least those attempts had been on patients that were already asleep, under general anesthesia. At least the patients weren’t watching me fail as I punctured their flesh with a sharp metal needle.

But this was different. I had just started my rotation in the ER. Unlike in the operating room, my patients would be awake. They would be watching my every move. They would be looking into my eyes and see the fear, and they would recognize that the medical provider in front of them was actually more nervous about this IV line than they were.

I was almost surprised to hear the words coming out of my mouth. I heard the words and knew they came from me, but it somehow felt like someone else was saying them. It was true — I had put in IV’s before — just none that were ever successful. Yet somehow, I still felt like an imposter. As if I didn’t really belong in the dark blue scrubs I was wearing with a stethoscope dangling from my neck.

I plastered a confident look on my face and followed the team to room 17 as I tried to quickly review the proper technique for placing an IV. A few feet away from the room, the ER physician explained that we were dealing with an IV drug user. Great. Just great, I thought. Such patients are notorious throughout ER’s for their difficult IV access. Years of IV drug use can wear away at the blood vessels, making it extremely challenging for doctors to gain access to those worn-down veins.

As we entered the room, I was immediately overcome by the unbearable smell of human body odor and rotten food wafting through my nostrils. The man appeared about 60, although his unkempt bushy grey beard surely added a few years to his age. He wore a dark green winter coat three sizes too large and a torn, muddy pair of jeans. Beside his bed lay what I presumed to be all of his worldly possessions — two large garbage bags and a half-eaten McDonald’s happy meal.

The ER physician with us was the first to talk. “Hello, Mr. Jones. We’re here to put in your IV. This is our medical student, and he will be putting it in. Is that OK?” Mr. Jones let out a gruff response, which sounded like “yeah.” His eyes never really focused on us. He seemed to be looking off, at some point in the distance.

I was nervous, I knew it. I pictured myself poking Mr. Jones numerous times as I attempted to properly pierce my needle through the vein in his arm. He didn’t seem like the kindest, warmest of gentlemen, and I was utterly scared of how this would turn out.

I gathered my supplies and began prepping his arm with alcohol. I was startled as he suddenly let out a string of incoherent syllables. I must have stood there, looking entirely confused because he repeated himself, a little slower this time. “I said, you ain’t gonna find no good veins over there doc. I never get into those ones.” I nodded understandingly. “Gotta move further up,” Mr. Jones continued. He then slowly pointed to a nice, prominent vein on his upper forearm, all the while avoiding direct eye contact with me. “Thank you, Mr. Jones,” I replied.

I proceeded to uncap the needle and to advance it towards his vein. “Not like that doc. Gotta come at more of an angle. No, not like that. A little more towards this side. Yeah, yeah, like that …” A bright red flash of blood filled the IV line. I was in! I did it!

I’ve never seen Mr. Jones again since that fateful day. But I have a lot to say to him. I have wondered if I will indeed tell it him if I ever do see him again sometime. Thank you, Mr. Jones. Thank you for calming me.

Aaron Grubner is a medical student.

6 steps to stop your smartphone from going viral. Literally. 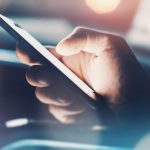 We must advocate for our most vulnerable patients 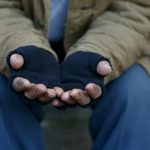