I recently collected anecdotes from women in medicine who have noticed the same thing I’ve noticed: We’re not as comfortable here as our male counterparts. Despite progress, medicine remains a patriarchy — an “old boy’s club” — and the women in this world are frequently reminded of this status quo. In collecting these anecdotes, I’ve noticed two main themes for the type of advice and comments women receive.

The first one speaks to women as if they are in medicine playing dress-up. As if it is sweet and endearing that they’ve chosen this career. They aren’t being taken seriously as professionals.

The second theme is one that reminds women they should “do less.” Do something that might take less time, or that is less strenuous, or in some way less likely to impede on their baby-making potential. The contrast is obvious here when compared to men, who deal with the opposite (but also significant) pressure to take on more and be more successful. Parents want their son to become a neurosurgeon, but they want their daughter to marry one.

Something important to address before going on: Female doctors and medical students are often confused with (or encouraged to become) nurses, PAs, or technicians. When we voice our discontent at this stereotype, we must do so while not insulting these professions as the “easier” options. Implying these other paths are “easy” is egregiously insulting and not honoring the crucial role they play in a functional health care team.

It is, however, valid for physicians to take pride in the decade(s) of sacrifices made, amount of work achieved, and the leadership roles obtained throughout their training. It is valid for them to expect to be referred to by the correct title. The sacrifices endured and the leadership roles associated with becoming a physician are not associated with what women are capable of — and that perfectly false stereotype makes navigating this environment a challenge.

Here are 20 anecdotes that provide a glimpse into the experience of female medical students and physicians.

(Any edits are for the purpose of maintaining confidentiality or for correcting grammar.)

Well, obviously. Surgery is like a roller coaster: To get in you have to make it past the height requirement.

2. “During my clinical rotation in family practice, an older male physician said he was surprised that I’m a competent clinician because he thought I was just another pretty face.”

Hmm … It’s almost like someone’s external appearance has nothing to do with how smart they are.

‘No I will be a physician in June.’

Unicorns, fairies, and female physicians are all mystical and unlikely creatures.

4. “I’ve had two men on two different occasions tell me I don’t need to study. I should just get a library card and hang out there, to meet a husband.”

But what if she has been studying how to find a husband? Then is studying OK?

5. “Coming home for the holidays to family and friends, they ask if I’ve met any nice docs or drug reps or other men (rather than asking the quality of my experience on clinical rotations).”

Yeah – we know you’re trying to become a professional, and that sure sounds cute, but update us on what’s important! Where’s that husband?!

6. “Took care of an older man in the ER and he told me straight to my face: Shouldn’t you be home in the kitchen?”

I hope she said, “Sir, if I was home in the kitchen, I don’t think you’d be alive right now.”

7. “A few weeks ago a patient’s dad looked at my badge clipped to my scrubs and said, ‘Wow just looking at your glamour shot, you look good!’”

I mean, an MD badge … a glamour shot … same thing, I suppose.

8. “I’m a third-year medical student [this is a man]. I have been rotating with a female attending and more often than not a patient will address ME as “doctor” and speak to me when answering her questions. They think I’m the doctor just because I’m a man, even when she has the long white coat that clearly says MD on it.”

Is there a female attending physician out there who has not had this experience?

9. “A conversation with my parents:

I have exciting news!

No, I got into medical school.

So she begins one of the most competitive and strenuous educational paths already questioning if she did the right thing because her womanhood implies motherhood, and everyone wants to demand that upon her. I’d love to know if any man has been encouraged to become a father rather than pursue competitive career goals.

10. “There is a timeline for when women should have children due to when they’re most fertile. By the time you’re done training, you’ll need to find a husband and have children.”

These are facts! Woman = fertility = reproduction. It’s as simple as 2+2. Don’t mess with the equation.

11. “I scribe while I am working towards medical school. The docs become very close with us and speak very openly and unhindered. Last year one of their female doctors had preeclampsia and was induced very early. While she was still being monitored in antepartum and while her baby was intubated in NICU, a doctor I was working for said, “Don’t have babies.” I narrowed my eyes at him. He said, “Well if you do, plan it at a time, so it’s not so damn inconvenient for your colleagues.” I told him I didn’t think he had any say in someone else’s family planning. To which he responded that I could not understand where he was coming from because I am a woman who wants kids. And her going into labor puts a strain on everybody else.”

Where to start with this one? First, a man in a position of power explaining to a young woman what her reproductive planning ought to look like. Second, the frightening and precarious medical condition of a physician colleague and her baby are seen as an “inconvenience.” Third, a young woman speaks truth to power, and her opinion is demeaned. I’ll call this one a triple threat.

12. “I’m in PA school, and I’ve been told that I need to get married and that school should never be a second priority to getting married.”

13. “My family told me to go to PA school so I could “raise a family and have a better lifestyle.”

What her family probably did not realize is that her idea of a “better lifestyle” is being a kick-ass physician completely invested in her chosen specialty who becomes an expert, a teacher, a speaker, a phenomenon. That sounds good too, you know.

14 & 15. “You want to do emergency medicine? What about a family? Family medicine would be a lot easier for you to have your own family.”

“I love emergency medicine and could see myself doing it in the future. My parents have told me I wouldn’t be able to “really” have a family working all those “odd/long shifts” and I should strongly consider settling for an outpatient job so I could have time with my family.”

A couple things jump out at me here. First, women are often told to prioritize their future family whether or not they have personally expressed interest in this. Second, the biases about the difficulty of family medicine or other specialty choices do not reflect the reality of the job or the inherent satisfaction and engagement within them. All specialty choices deserve respect.

16. “I’m going to be a PA, and I’ve had more people than I can count tell me that I should “just be a nurse” which is rude towards me but also rude towards nurses!”

17. “When someone asks me what I do, and I say I’m a medical student, I am met with a reply of ‘Oh, so you’ll be a nurse’ or ‘So what does that get you? Will you be a pharmacist?’ When I state that I will, in fact, be a doctor, without fail I receive a reply of ‘Oh but not a DOCTOR doctor, right?’”

19. “This time I was with the chief of ICU, who was a woman, and another woman who was a relative of our patient came in and asked for the chief. So I told her that the woman next to me was the chief and she said, “No that’s not a doctor, that’s a nurse.”

Well, the customer is always right, I suppose.

Among the dozens of quotes I received, there was one that perfectly encapsulated the absurdity of these stereotypes. Ladies and gentlemen, I present to you:

20. “Are you becoming a doctor and not a nurse because you’re a lesbian?”

To wrap up: No one comment above could make or break a career. But a continuous stream of them, accompanied by the actions that are created by people who think like this, hinders the upward mobility of women in medicine.

The statistics show it: Although medical school enrollment has achieved equal percentages of male and female matriculants, female students do not end up in the most competitive specialties. According to this website, only 19 percent of surgeons in the United States are women.

It is an exhausting, sexist environment and it is a disservice to health care in general. We should unleash the potential of brilliant women in this world, supporting and encouraging them to use their gifts, contribute fully, and achieve their dreams. 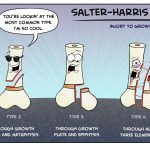