“Can I look at that book?” said the man next to me in an accent I would soon learn to be Pakistani. I had placed the book face down on the park bench intentionally. In a busy, public place, I didn’t want to broadcast that I was reading The Doctors Guide to Smart Career Alternatives and Retirement.

The back cover contained enough information to pique the polite man’s interest. “Sure,” I said. I was genuinely curious as to why the guy, who has holding a baby boy on a Thursday afternoon in their Nickelodeon universe, would be interested in a book about leaving medicine.

One man’s regret after leaving a medical career behind

“I left medicine after two years,” he told me. After two difficult years of studying the medical sciences in Pakistan, he decided it was not for him. Now he is a police officer in Pakistan on a one-year leave for an academic fellowship at the University of Minnesota.

Did he regret leaving medicine? Absolutely. His sister and numerous friends are now physicians, earning the equivalent of $10,000 to $30,000 US dollars per month in private practice in Pakistan. He earns about $2,000 a month and lives under the constant threat of being targeted by terrorists as an officer of the peace.

After two months in The States, he has a favorable impression of our nation. He appreciates how people follow the rules and respect private property. He had seen the movie Fargo prior to his arrival, and had read about this “Minnesota nice” thing, so he had some distorted idea of what to expect.

His wife and three children had joined him just a week prior to our chance meeting, and they were happy to be reunited. They found the people here to be much friendlier than most of the characters in Fargo. The locals actually were nice, and the theme park rides were a hit with his daughters. Their favorite was the log flume; it was my boys’ favorite too.

Yesterday had been a difficult day for them, though. They learned that a fellow police officer, a gentleman he knew well, had been shot execution style as he stepped out of his home. Terrorists.

Why was I reading that book?

My new friend, whose name sounded something like Andvar — we’ll call him Andy — was curious as to why I was reading this title. Was I planning to leave medicine?

I couldn’t muster a direct answer. While it’s true that I’m at least seriously contemplating a departure, my rationale seemed pretty trivial compared to the guy who takes on criminals in Pakistan for a living.

I went on to chat with Andy about some of the frustrations of physicians in America, and why there were plenty of docs looking to walk a different path. A book like this wouldn’t exist if there wasn’t a market of disenchanted doctors who would find some value in it.

My bench mate was surprisingly understanding. When I told him about the threat of malpractice lawsuits, he told me doctors in Pakistan can’t be sued. I also talked about production pressures, dealing with insurance companies and their denials, the onerous documentation, etc. Again, I felt a bit foolish describing our woes with an electronic health record to a man who wears a bulletproof vest when he clocks in, but he asked, and I was willing to indulge.

Andy could see that there were some issues with our health system, and recognized that many of the irritations we deal with are non-existent in Pakistan. I’m sure they’ve got issues of their own, but I got the impression Pakistani physicians spend more time on patient care, and less time on bureaucratic nonsense than we do here.

“You help people,” Andy said, in an unintentionally guilt-trippy way. “Well, so do you,” I replied in a respectful tone. Andy felt most of his work was directly with criminals, which certainly helps people, but in an indirect way.

Physicians treat individuals directly, which should be more personally satisfying. Some of us might feel that we spend as much or more time with the computer, the dictaphone, or with the patient’s family members as compared to the actual patient, but ultimately our mission is to directly help people live healthier lives in some way. I can see the value in that.

Perhaps these jaded physicians are suffering from a “grass is greener” mentality, Andy hypothesized. That was the case when he left medicine years ago. Sure, it was difficult, but if he knew back then what he does now, he would have stuck with it. Would the doctors who pick up this book feel the same way as he did after leaving a traditional medical career for good?

By definition, regret is something that can only be measured with the benefit of hindsight. One cannot simply calculate how many units of regret are about to be realized as the result of a particular decision. And leaving a medical career behind is undoubtedly a very big decision.

Abandoning one’s clinical career is not a career move to be taken lightly, nor is it easily reversible. Skills diminish, medical knowledge evolves rapidly, and you can’t just walk back into a doctor job after even a couple years off. Is it possible to work as a doctor again after an extended sabbatical? Yes, but probably not without limited options and some remedial education.

There are other reasons a physician might regret a premature exit. I’ve been told some of us have large egos, and that those egos are strongly connected to our statuses as physicians. Pillars of the community, or something like that.

Maybe you’re not ego-driven, but you’ve still got work friends, and that social interaction may be missed. The same could be said to the connection you make with patients. While it can be trying at times, the difference you make for the people you care for gives you a sense of purpose that cannot easily be replicated away from the exam room or operating table.

Let’s not forget that these physician jobs can pay very well. If financial independence is a goal (as it should be) and you’ve got a ways to go, a non-clinical career may delay that goal for years, and retiring early without a plan to become financially independent may leave you in a difficult financial position in a decade or two.

Will I regret retiring early?

While I didn’t let on that I had my own reasons to be reading my book, the fact is there is a good chance I will choose to retire from my job as an anesthesiologist before my 45th birthday. I won’t know if it’s a decision I’ll regret until sometime after, but by answering a few key questions, I believe I can come up with a reasonable guess.

Why do I want to retire early?

It started with “because I can.” It wasn’t until I realized we had attained financial independence that I started to think about retiring so early. When you don’t know that not working is a viable option, you don’t think about it much. Once I wrapped my head around the fact that paid work was indeed optional, I started to consider the alternatives.

I’m not burned out, but there are certainly times where I feel stressed out. I can’t think of one time I’ve been happy to hear the chirp of the pager, and I’ve suffered that chirp thousands of times. When I compare my workdays to my weekends, or to the days I focus on writing, I have a strong preference for the latter two.

I’ve read about the things that make us happy, and it seems clear to me that I’ll be better able to do those things without the doctor job that got me to where I am today. I’m grateful for all I’ve learned and have done in this profession, but I don’t feel strongly that providing anesthesia care is something I need in my life to feel happy and fulfilled.

Yesterday was the first day of a three-week long family adventure, learning the Spanish language in gorgeous surroundings. We met retired couples taking classes at the same school as us who are in the area for several months. One of the couples will return to a motorhome when they go back to the United States. Another slow travels around the world, renting long-term Airbnb apartments. A three-week trip is amazing; a three-month excursion could be much more so.

What if I’m wrong?

Since we can’t forecast regret (or lack thereof) with 100% accuracy, it’s prudent to have contingency plans in place. And I could turn out to be completely wrong. Maybe the grass isn’t any greener on the other side.

In some ways, maintaining the status quo is the easiest thing to do. Healthcare is covered. Children are enrolled at a traditional school. Travel planning is limited to short stretches. The paychecks keep rolling in and the retirement accounts continue to grow to a number well beyond enough.

Given my cautious nature, I’m probably a little more likely to work longer than necessary rather than retire too soon, but I hope to be close to that sweet spot on the likelihood of regret scale. 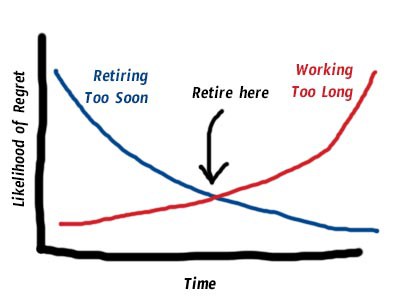 If, however, I decide I want to go back to work after a false start retirement, I’ll make it as easy as possible to do so by taking the following steps as I wind down my clinical career:

By doing these things, I don’t think it would be difficult to return to clinical anesthesia within a year. After a full year, I may have to rely on returning to a place where my skills and knowledge have been proven. Facilities unfamiliar with me would rightfully be hesitant. After a couple years or more, I realize that some re-training may very well be required.

I look at trips like the one we’re taking right now as trial runs for what the first few years of early retirement could look like. The difference would be that I won’t be scheduling trips around my job/work schedule, or more accurately, squeezing in work around our recreational calendar.

We could travel further for even longer, and make open-ended plans. If we find we’re not content with all that time on the road, we could easily dial back and let our roots grow deeper at home, which is something we would like to do for our boys’ high school years, anyway.

Also, I have no plans to stop writing. This site began nearly two years ago as a fun hobby, and it’s become something of a fun business. As we begin to live the life I’ve been contemplating, I’ll have much more to say about the topics of financial independence, early retirement, family travel, and related topics in personal finance.

It wouldn’t be unfair to say I’d be trading one job for another, but I feel it’s a trade I could make without regret. If I had left medicine after two short years like Andy, I’d probably feel differently. 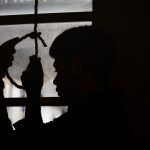 When you lose someone, it takes a piece of your being with it 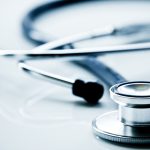 How physicians can retire early without regret
8 comments