The senior psychiatry resident at the University of Washington School of Medicine warned me ahead of time. She laughed as she said, “He’s weird. You’ll get used to him.”

When I first met with him, the psychiatrist lazily spun in his chair, his left hand tucked into his pants, his thumb hanging out. After he told me his expectations as my supervisor, he patted my right thigh as he ended the meeting.

I spent one day a week training in his clinic. He often put his hand on my shoulder. If he sat near me, he extended his arm to pat my leg. When I sat far from him, he crowed compliments in front of patients and other staff: “Dr. Yang is one of the best residents who has ever worked with me!”

He began to send emails to me at all hours of the day and night. They stopped referring to clinical research and developments; now he wrote of art, history and music that he thought I would enjoy. Some of the timestamps on his emails were near 2 a.m.

My discomfort increased over time, though I wondered if I was overreacting. After all, didn’t another resident tell me that he was weird? She didn’t seem distressed with his behavior. Maybe I was too sensitive.

I asked two other supervisors, both psychiatrists, for advice. The male psychiatrist was angry and swift in his response: “You have to tell your residency director. This isn’t right.”

The female psychiatrist wavered. “I don’t know,” she said after a long pause. “It’s up to you if you want to say something. It could turn into a ‘he said, she said’ issue.”

She had a point: Who would believe a trainee over a tenured professor? Would he retaliate? How would this affect the rest of my training?

I decided to talk with him first. My request seemed reasonable: “Could you please stop touching me and stop sending emails to me that are unrelated to clinical work? I feel uncomfortable when those things happen.” I rehearsed.

The next time I saw him, he greeted me with a pat on the shoulder. I felt my face flush as I stammered, “Could you please stop touching me? It makes me feel uncomfortable.”

He paused, then smiled. “Why didn’t you tell me sooner? It’s not that big of a deal. I’m just being friendly.”

It was a big deal: He stopped talking to me entirely when we were in front of patients. He stopped teaching me. At what would become our last meeting together, he refused to acknowledge my concerns about a clinical issue. It seemed like he was trying to pick a fight with me. We fell silent. He looked at me with amusement. I glared at him.

“Are we done?” I still felt like I needed his permission to leave.

“Yup!” He grinned. It was clear I had to talk with my residency director.

She believed me. She was swift and immediately pulled me from the rotation.

One of my fellow trainees, a robust man who played football in college, was assigned to work with him for the following six months.

My fellow colleague believed me. He was swift. He objected and asked for another rotation, stating that he didn’t feel comfortable working with a physician who had mistreated another trainee.

The psychiatrist ultimately left the institution, following an administrative leave.

Sexual harassment occurs in every profession, even medicine. To stop this, we need as many people as possible — men, women, colleagues, advisers and leaders — to support women and act swiftly when these events occur. I was fortunate, but not all women are.

Maria Yang is a psychiatrist who blogs at her self-titled site, Maria Yang, MD.  This article originally appeared in the Seattle Times.

Is this is why women so often settle? 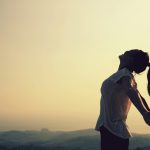 #MeToo in medicine. This is one physician’s story.
4 comments