It was such a simple and concise statement. Four words. But it felt like a bullet that was heated in the depths of hell had pierced through my heart when I heard those words. My ears burned and I felt physically ill. I wondered to myself, “Am I really that bad at medicine? Am I even going to make it? Should I just quit?” I felt lesser than. I felt no different than the time a woman on the subway told me I should go back to where I came from, which by my darker Indian complexion, she decided was Africa.

I’d sat at tables filled with educated legal and medical minds where I fought tooth and nail to defend my decision to attend a Caribbean medical school. Money. Waitlists. Wasting time in college partying instead of studying diligently. But I was older now. And wiser. And I know in my heart that I could do it and do it well.

I was prepared for spending 16 months on an island far away from family and friends. I was prepared for the numerous exhausting hours of travel spent back and forth during Christmas breaks. I was even prepared for the numerous mosquito bites and even rolling blackouts biweekly. But no one ever told me the discrimination I would face in the medical community by being a Caribbean IMG once I got back to the United States. I was not prepared to hear those words from another physician. The very profession that I had aspired to be a part of had basically cast me aside before I was even given a chance.

I was well aware of the fact that taking the Caribbean route was a difficult and even impossible road for some. But I was willing to take that risk. Canadian medical schools were so saturated at the time that some students were on waitlists for each of the four years they applied after spending said year judiciously padding their resumes with publications, volunteer experience, and work experience. I was not willing to waste years of my life having a miniscule sliver of hope that some day I may be called to interview at one of these schools.

“You’ll all end up in primary care anyways, if you end up anywhere that is.” I stood there with my mouth wide open and shock pouring over me like waves. This physician was in primary care himself though, the very place I aspired to be in. So what was the deal, I wondered.

Fast-forward a few days in. I worked harder than I ever did in my entire life. My literal blood, sweat, and tears poured into every second I was there, and you bet that I was always there. I asked to do everything and learned everything I could. Floors not busy? Let’s learn how to hook up a dialysis machine. Phlebotomist occupied? Let’s see if this patient is willing to help me learn a blood draw for the first time. Nurses swamped? Let’s learn how to put this catheter in.

And it paid off. My preceptor saw me for who I was. A studious individual with a penchant for learning and doing. The student who stayed late in the ER on a Friday night hoping to get the chance to suture up someone. The student who came home after 16-hour days and stayed up until 2 a.m. reviewing all the topics of the day. The student who fought every second against that IMG stigma as though her life depended on it.

My evaluation at the end said this, “Denelle has a great attitude toward medicine and learning. She was my best student by far, and she changed my attitude toward IMGs forever.” I lived for those words. I kept that work ethic strong and used my newfound self-proclaimed platform of hope to bestow knowledge about who IMGs really are. And they are your future doctors.

Denelle Mohammed is a medical student.

Learn pulmonary hypertension with a Medcomic 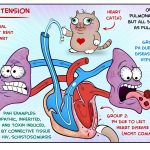 Doctors and patients are drowning in data. What can be done about it? 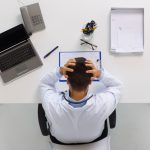 If you don’t teach IMGs, maybe you should start
5 comments