My alarm went off at 4:15 a.m. I lay in bed dreading the day ahead of me. By 4:50 a.m., I arrive at the nursing home where I was doing a geriatric rotation. A stack of charts and a patient complaint list was awaiting me. On the list were the usual suspects: a follow up for lab results, a fall, abdominal pain. And at the bottom was a note on my patient — “deceased, requires discharge note.” Sharing the news with my colleagues, there was a moment of sadness and a shared sentiment of, “Aww. She was sweet,” and just as quickly we went back to pre-rounding.

Frustrated, I sat down to write a discharge summary on the deceased patient. In what condition is the patient being discharged? Fair? Stable? Improved? There was no option for deceased. What procedures or therapies should the patient continue after discharge? All I could think to write on that line was “N/A.” I reviewed the hospital admission note. The patient was found unresponsive in her bed, and after 30 minutes of running a code, she was transported to the hospital where she was pronounced dead. Prior to her passing, she shared with me that her hope was to survive until her birthday in a few weeks.

I caught a glimpse of her room as I walked down the hall. Her blue quilt still on the bed, the collection of books on her nightstand and the new addition of a cardboard box to remove these items from what was once her home. An aide was sorting through the patient’s toiletries, haphazardly throwing the full bottles into the box and the remaining items in the trash. The whole thing was so unceremonious. No one was mourning. And aside from a posted bulletin announcing her death, any memory of this patient would be gone before the end of the week.

How odd is it that we work in a profession where a death can be summarized on a note left on a chart? That a death is a check off a “to-do” list. Does anyone care that a life was just lost?

This is not the first time I was faced with a patient’s death. At 18, I got a research internship at a Level-1 Trauma center. I was tasked with measuring CO2 levels via nasal cannula. One afternoon, I was paged to the stabilization room for a 42-year-old male who attempted suicide by gunshot. Per EMS, there had been numerous 911 reports regarding this man who was seen sitting on a hill overlooking the interstate for several hours. It was early afternoon when he fired one shot through his mouth sending the bullet bouncing around in his cranium before becoming lodged in the opposite side of the brain.

Unsure if I should place a nasal cannula on this patient, I made my way to the head of the bed. The physician looked up and saw my wide-eyed-self standing in front of him, clutching a clipboard. Without missing a beat, he instructed me to hold pressure where the bullet had blown off part of the man’s skull and ear. I stood there hoping for a “Hail Mary” that this patient would survive. The team worked furiously, but the patient coded and despite resuscitative efforts. He was officially pronounced dead minutes later.

His death was more than six years ago, and he still creeps back into my thoughts. What was going on in his life that caused him to take his life? Why did he sit overlooking the interstate for so many hours? Was he waiting for someone to stop him? To beg him not to do it? Did he regret it after he pulled the trigger? Was he in pain during his final moments?

I tried telling my friends about the experience, but they couldn’t relate. It’s ludicrous that I would be upset about the death of a stranger. My coworkers told me it wasn’t my place to grieve, others were more blunt, telling me if I’d ever want to make it as a physician I’d have to toughen up.

Several years ago, a paramedic captured a photo of an ER doctor outside, crouching down after the loss of a 19-year-old patient. The photo spread like wildfire. It was a rare glimpse into the emotional toll a patient’s death can have on a physician.

As doctor’s, we get a bad rep. We are deemed callous, hardened, uncaring. While nurses are with the patient day after day providing care and making the patient comfortable, most of the work as a physician is behind the scenes. Despite spending only a few minutes talking to the patient during rounds, doctors spend hours working on paperwork, charting and phone calls to verify medications, order the correct labs and imaging and put in consults for various other physicians and services.

For patient’s family members, we have incredible resources out there to help them navigate their mourning period. From pamphlets to social work consults, we do everything within our power to lessen the overwhelming sense of grief they are experiencing.

But what about the medical professionals who worked the case? We often spend weeks at a time caring for patients. When one passes away, not only do we feel sadness for a life lost, but many times there is a sense of guilt that maybe we didn’t do enough or worse, maybe we did too much.

In medical school, we learn how to help our patients and their families navigate the five stages of grief. But aside from the orientation “don’t kill yourself” speech, no one ever addresses grief as a doctor. We are taught that showing emotion is unprofessional and a sign of weakness. I disagree, mourning a death is never inappropriate. For too long we have been encouraged to stifle our feelings, to toughen up. Instead, I say acknowledge the sense of loss, learn from it, make that interaction with your patient matter. Physicians are only human after all.

Kirsten Lederer is a medical student. 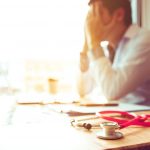