There is a lot of talk on the web about having an emergency fund. Typically this is three to six months of expenses. Some would argue to keep three to six times bare bones expenses, and others would argue to keep three to six times the average amount you spend on expenses. Having an emergency fund makes sense to cover life’s unexpected occurrences. What could these be? Well, the biggest would be losing a job. Lower on the list would be for major expenses like car or home repair. After that, medical expenses are the other most likely unexpected expense. These things may run between $500 and $5,000 (a broken furnace can be pricey). So my question is if an emergency fund is needed?

I think the easy answer is yes, particularly if the average income is somewhere between $30,000 to $100,000. Then an emergency fund becomes crucial because coming up with $500 or $1,000 is more difficult, especially if the net worth is close to $0. The other time the answer easily is yes is if there is job volatility. This can be either insecurity in the current position or being a small business owner. Both cases can lead to a loss of income and therefore three to six months of expenses become very important. Nobody wants to be kicked out of their homes, and in the case of a loss in income, this can be very important. In both of these cases, I think having an emergency fund is paramount!

But how about high earners?

Most physicians have very, very strong job security. It is difficult to hire physicians, and when they are established, have a strong relationship with their patient panel, and understand the hospital/clinic system making it very disruptive to replace them. Therefore the likelihood of having a salary cut or loss is less likely. This is particularly true for partnered or employed physicians. Some physicians who may come into trouble and desire to maintain a larger emergency fund are those who are dependent on collecting payment. I have one colleague who works in private practice, and there were months in his practice where they did not earn any income. For him, an emergency fund is necessary.

For most high-income earners a few grand will not break the bank. Hopefully, they have read some financial blogs, and their output/spending is less than their input/earning. Therefore, at the end of each month, they have a surplus of cash. That money should be going towards savings/retirements/debt pay down and if there is an emergency then direct it towards the emergency.

Most physicians should have a decent credit score and therefore higher credit limits. If an emergency requires a few grand, they should be able to place it on their credit card with the plan to pay it off at the end of the month. That may require liquidating some after-tax assets but will allow for quick coverage in case of an emergency.

The downside of having money sitting around in a bank

This one depends on risk tolerance/allocation. I am relatively young and have a high risk tolerance. I would rather have my money in the stock market than sitting in a bank. Therefore, I do not want three to six times my monthly expenses sitting around not earning interest. There is always the danger of losing money such as in 2008, but that has to be a personal decision.

Do you have an emergency fund? If so, how many months of expenses? Barebones or total expenses?

Disclosure: Please save an emergency fund if there are any concerns about job security or making your bills at the end of the month. The preceding article is for physicians who have relatively stable incomes and job security. 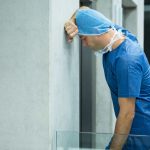