The couples I see for counseling are not always perfect, not that any couples ever are. But when cancer enters the relationship, for some couples, things get ugly and get ugly fast. I believe that we like to think that cancer makes people “better”; that people rise to the challenge and become the best they can be. I think that we like to believe that all our patients and their partner/family experience personal growth and end up as better human beings after cancer than they were before. Perhaps it is human nature to hope that every cloud has a silver lining.

This does happen, of course. Couples grow closer, family grievances and feuds are put aside, and people learn that life is precious and fleeting and relationships are important. But there are also people for whom cancer makes things worse, and old grievances and feuds rise to the surface, and the parties refuse to let them go. I have had a number of such couples in my office recently. Couples who sit in their chairs facing me, arms crossed, not making eye contact with each other even when emotions are shared and tears flow. These are not couples who reach out to each other over the small table between them to offer comfort or empathy. They each sit there in their solitude, and one glares at me while the other beseeches me with their eyes to close the chasm that divides them. I try my best to get them to connect, to just look at the pain in the other’s eyes, just for a moment. There have been times when I have had to say, “Look at your spouse! Look into their eyes and tell them what you see!” Some can’t do that, despite my exhortations to try. Others glance across briefly, then look away. Do they find the pain unbearable or do they not care?

Mary* and Jim* are one such couple. She was diagnosed with breast cancer a year ago, and they sleep in separate bedrooms. She says it’s because he snores and she sleeps more soundly without him. Jim wants them to sleep in the same bed, but Mary prefers the solitude of her own room. She literally shuddered when he said that he wants to touch her. What else is going on that is not being said? Is his snoring the excuse she needs to keep him further than arm’s length? Their body language told a story: she sat with her arms crossed, seemingly trying to make herself smaller in the chair. Her posture suggested someone who was trying to protect herself, but from what? He is a large man who spilled over the sides of the chair, his one arm on the table almost invading the space that surrounded his wife. He wanted them to come back to see me, to learn strategies to get closer again, to move her back into his bed; she said nothing and her silence told a different story. I asked them to talk privately about what we could achieve in our work together; 3 months later they have not called for another appointment.

Another patient, Doug*, is convinced that his wife of 45 years is having an affair. He described a series of events to me that “prove” to him that she is cheating on him with someone from work. He has waited outside her office building to monitor her coming and going and once or twice he thinks he has seen the other man’s car leave at the same time that hers did. These thoughts consume his every waking moment. Since starting androgen deprivation therapy five years ago he has not been able to “satisfy” her, he says, and therefore he is convinced that she has found a replacement for him. When I met with them as a couple three months ago, she presented herself as a caring spouse who is confused by his possessiveness and mercurial moods. She has either refused to accompany him to our subsequent appointments, or he has not told her that he continues to meet with me.

And then there was the older man who has been seeing someone (or multiple some ones) other than his wife throughout the many years of his marriage. His wife may not know about this, or she may be happy to not be “bothered” for sex, but his long history of going outside his marriage challenged my core values.

Being part of a couple is not always easy. I have encountered women who, after 20, 30 or 40 years of marriage, walk away from their spouse after a cancer diagnosis. The cancer was a wake-up call, and they realize that they cannot stay in a relationship that is not affirming or loving, or is outright bad, any longer now that their time is more limited than they thought. I have seen men made vulnerable by their inability to perform sexually question their role in their relationship and challenge their partner to find someone else to satisfy them. Some are deliberately cruel in their misguided attempt to make their partner happy, as if they can be replaced so easily and just for sex.

For some reason, these unhappy couples stand out in my mind more than those who are happy and strong and trying so hard to connect with each other in the aftermath of cancer. We often remember our “failures” as clinicians more than our successes. And often those who are successful don’t need my care once they have resolved their problems or learned to live with their altered bodies. I understand why my oncologist colleagues like to see their patients for many years after treatment is over; it is so good to see those who are doing well rather than those who still struggle. 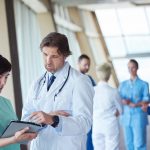