Thirteen years ago, I received a call from the mother of a college freshman who was concerned because her son had been diagnosed with mononucleosis during finals week.  She felt something was not quite right and asked me for advice.

“Trust your instinct, go get him, and bring him home.”

She brought him to my clinic the following day.  He looked mildly ill.  His vitals were stable; he was fatigued, slightly dehydrated, and pale.  His tonsils were enlarged to the point they were “kissing,” though not causing airway obstruction.  I gave him a steroid injection, with strict orders to go home, rest, drink clear liquids, and return with his mother the next morning.

On the second day, he walked in looking unequivocally worse.  He was complaining of neck pain, though not stiffness, and his tonsils were considerably more swollen.  I drew blood, sent it off, and recommended a lateral neck film to evaluate his airway.  The lab called within the hour for an unusual finding.  He had atypical lymphocytes (mono cells) and a few schistocytes (chewed up cells) on his smear, he had thrombocytopenia (low platelets), and his sedimentation rate (a marker of inflammation) was unexpectedly low, something I had not encountered before.  I pulled out the book to search for causes of low ESR, and a particular one jumped out.  The test can be a marker for fibrinogen levels, which if abnormal, may indicate disseminated intravascular coagulation (DIC), a serious complication of infection.  I spoke with the lab and added a PT, PTT, fibrinogen and D-dimer levels (tests to help with diagnosis.)

The radiologist called to say my patients’ airway was narrowed and as I was contemplating my next step, he and his mother returned.  I will never forget the look of fear in his mothers’ eyes as he assumed a “tripod” position with labored breathing in my waiting room.  I am certain distress was etched on my face as well.  I called an ambulance to take him to the nearest hospital.  His mother started sobbing, and I held her hand while we waited for EMS to arrive.  I promised her he was going to be alright, not being certain whether or not that was the truth. Once on his way in the ambulance, I breathed a sigh of relief.

The term glandular fever was first used in 1889 by German physicians who recognized a clinical syndrome with the classic triad of fever, pharyngitis, and lymphadenopathy. “The kissing disease” is transmitted via primarily oropharyngeal secretions. 50 percent of children are infected before age 5; approximately 12 percent of susceptible college-aged young adults seroconvert each year, some of whom experience severe complications.

Patients with infectious mononucleosis present clinically with fatigue, which may be profound, but usually, resolves over three months. Nausea, without vomiting, weight loss, and anorexia are common.  Mortality and morbidity due to uncomplicated EBV infectious mononucleosis infections are low. There is really no treatment for this condition except rest, hydration, and the tincture of time.  However, massive tonsillar enlargement may result in airway obstruction, for which steroids are indicated, which was present in this particular case.  Rarely, mononucleosis results in more severe complications, such as encephalitis, pancreatitis, myocarditis, and myositis.

While I see mononucleosis often, I have not seen a case of DIC in the last 13 years.  He was admitted to the ICU that evening and remained there for three days on steroids and antibiotics.  D-dimers came back positive, and the rest of his labs were consistent with DIC. He decided to take some time off from school to recover and was able to make up the finals he missed during the next semester.  Over the years, he moved on to his adult life elsewhere, and we lost touch.

About twice a year, patients from the past stop by for a “social call” while passing through town.  Visitors are always an unexpected blessing to my day.  I remember every single one by name, even after almost two decades in practice.  This visitor was the young man’s brother, who is just as special to me.  I hugged him, and he handed me an envelope from his mother.  His older brother turned 31 recently and is doing well.  I opened the card to find these handwritten words:

“Not a year goes by without conversations about you, and much gratitude for truly saving my son’s life when he had mononucleosis in 2003.  We have had our challenges, but all in all doing very well.”

“Every year at the beginning of December, we give extra thanks for you, your heart, your caring, and expertise.  Your efforts on our son’s behalf continue to be perhaps the greatest blessing we have experienced.  We hope it has been returned to you ten-fold! With much love …”

I often wonder who has been the greatest blessing to whom.  A physician bears witness to the direct impact we have on the lives of other human beings.  What a rare treasure to behold!  As physicians, our journey is riddled with successes and failures.

Yet, my love and dedication to this noble and rewarding profession is instantaneously revitalized when a young person wanders into my office and reminds me of a time when we overcame such insurmountable odds together. 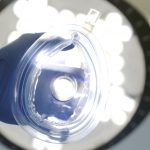 I'm a U.S. doctor just back from Sudan, where hospitality from Muslims greeted me everywhere 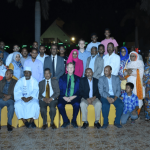