I bought my first house a few days before starting my second year of residency in St Louis. It was a townhome: two bedrooms, one and a half baths, hardwood floors and lots of wall space. So much wall space, in fact, that I immediately began to look for ways to adorn all those barren surfaces.

After visiting some local art galleries, I came to two conclusions. I knew exactly what I liked, and the artwork was exceedingly expensive. Expensive enough to not only prohibit me from decorating my house, but also from buying a single piece for my bedroom.

The easy path would have been to obtain a bunch of prints, frame them, and call it a day.

Instead, I scoured the Internet and eBay. Within days, I was able to find similar paintings, by similar artists, for half the price. After making my first purchase, I took a few extra minutes to chat with the seller. Over the next few weeks, I spent countless hours researching, calling and interviewing any art dealer I could find. Some took my phone calls; others hung up. I even spoke to a few artists themselves.

I quickly learned that there was a secondary art market with a fairly low cost of entrance. By making a few friends, I could piggyback my purchases on those of much more wealthy buyers and obtain quite a discount. A discount, in fact, that was much better than the art galleries I had most recently frequented.

Fast forward a few years, and I was running a business buying and selling artwork. Initially, my purchases were driven by a passion for the artist, but eventually, I learned to buy whatever I could sell at the best margin. Hundreds of thousands of dollars worth of product came and went through my business in any given year.

But that was the rub. No longer was the canvas an object of my fascination. It was now fancy paper that I could move along, and be paid with even fancier paper. Once, I bought ten-thousand dollars of artwork that I would have previously coveted. I inspected it, packed it back up, and sent it on it’s way to a buyer who offered me double.

I felt nothing. Well not exactly nothing, but the thrill had dulled. A spark was still there, but it was deadened. Smoothed over by years of experience dealing with beauty that came to and slipped through my fingertips with relative ease.

When I began to run my own medical practice, the extra time for such frivolity evaporated. There was simply no way to take care of my patients, hire and fire, monitor the books and tend to an extra business.

The memory of the precious paper never quite left me, though.

Often people ask what it’s like to be a doctor, to save a life, or watch a patient die — to know that your mistakes carry such weight.

Usually my mind goes blank, and instead, I think fondly of looking at those barren walls for the first time.

Then, I sit them down. I clear my throat.

And I tell them stories about selling artwork. 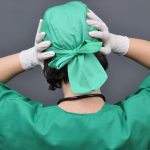