Early on a random Tuesday morning, I walked into the burn unit and found my 87-year-old patient, Mr. Gray, in septic shock. While Mr. Gray’s burn injury was small by our standards, it appeared that the sequelae of the injury might prove fatal. I called Mr. Gray’s wife to obtain consent for a vascular catheter through which I planned to begin continuous dialysis and was surprised when she declared, “No more lines.”

The rest of my day was a blur of rounds, surgeries, and bedside procedures. I was able to temporarily stabilize Mr. Gray with antibiotics, fluids, and pressors. When his wife arrived at 3 p.m., she explained that the rest of Mr. Gray’s large family would arrive later that evening. Again, she stated, “I think it’s time to stop.”

I took her hands in mine and assured her, “It’s OK I hear you. Let’s meet tonight and chat more.”

I finished up my work and headed to a yoga class. As I settled onto my mat, legs crossed, arms folded in my lap, pager by my side, I closed my eyes and began my ujjayi breathing. As the class progressed, I flowed through the sequence of postures, slightly distracted but grateful for the opportunity to move, breath and reflect upon the fact that Mr. Gray would likely die later that night. Ninety minutes later, I arrived back at the burn unit to meet with Mr. Gray’s family.

Yoga and surgery are the two pursuits that have occupied the majority of my adult life. A quick glance at my bookshelf will reveal The Yoga Sutras of Patanjali nestled closely next to the latest edition of Mastery of Surgery. A brief conversation with me will reveal just how intimately the two disciplines are stitched into the fabric of my life.

The word yoga is most often defined as “to join” or “to unite,” in other words: to make whole. For the past fifteen years, I have come to my mat to unite my body with my spirit and my head with my heart, often in an attempt to integrate the lessons learned during a challenging operation or a difficult patient encounter.

The word surgery is best translated as “hand work.” As a discipline it seeks to heal people, to make them healthy and whole. Unlike my yoga practice, my surgical practice demands that I arrive to the operating room table with my head, heart, body and spirit in top shape. Missteps on my yoga mat may lead to a tumble or a fall; missteps in the OR may lead to a severed vessel or an injured duct. There is no denying that the stakes are high, even during a “routine” case. Thankfully, my yoga practice- whether it is an early morning class, a quick stretch in the locker room or a deep breath during a challenging case- enables me to show up to the table ready to perform.

I have been a student — of yoga and of surgery — for many years. Both practices have a formidable lineage, a distinct language and a multitude of rituals. Practicing yoga with a disciple of Mr. Iyengar and operating with a colleague of Dr. Red Duke (both masters in their respective fields) has been equally as thrilling. Learning to chant the Gayatri mantra and learning to dictate my first operative case was equally as fulfilling. Having my body adjusted by a skilled teacher during triangle pose and having my hands adjusted by my favorite fellow during a Whipple was equally as gratifying.

Eventually, however, one must move beyond being a student to becoming a practitioner. And so, as a third-year surgery resident and the chief of the burn service, I met with Mr. Gray’s family. As we gathered outside his room, I reviewed Mr. Gray’s hospital course thus far and then explained that Mr. Gray was currently in septic shock, likely secondary to bacteria in his blood. “What questions do you have for me?” I asked gently after reviewing the treatment options.

“What if we do nothing?” asked his wife. “All this poking and prodding, the machines, this is not what he wanted.”

Surgery can be thrilling as well as humbling. I had cared for Mr. Gray for more than three weeks; I had excised his burns, grafted his wounds and weaned him from the ventilator. My ego had been proud that this 87-year-old man was doing so well on my watch. And yet, the skin grafts had failed, the ventilator was back on, and dialysis was looming.

Ego has plagued me on my yoga mat as well, and I have been humbled many times over the years. A deep backbend left me with weeks of pain. An extended side plank pose left me a pulled hamstring. And, most humbling, a “routine” crow pose recently left me with a broken nose and $2,000 in medical bills.

As an advanced practitioner — of yoga or of surgery — can confirm, both disciplines are about so much more than a physical practice. Devotees of yoga aim to perfect not only postures but rightful living, breathing, and meditation. Surgeons learn not only to operate, but to prepare patients for surgery, care for them in the intensive care unit, manage their post-operative complications and, sometimes, walk with them and their families through very difficult decisions.

And so it was with Mr. Gray. His wife chose to transition him to comfort care. As we shut off his drips and removed his endotracheal tube, his family clasped hands, and Mr. Gray’s son prayed over his father. He passed moments after we all said Amen.

I awoke early the next morning and settled myself onto my mat. Legs crossed, arms folded in my lap, pager by my side, breath long and slow, I turned inward to process my yesterday before turning outward to face my day. And so it continues. 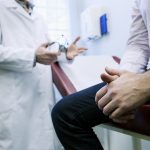 The yoga of surgery
1 comments