“Don’t forget to bring that stool card back in, OK?”

As he walked out of the room, carrying his portable oxygen, he turned back, with the nasal cannula in his nose, and replied, “I’ll get it back to you soon.  I’d hate to have colon cancer.”

At this point, I’d hate for him to have a positive occult blood card.  I could really care less about colon cancer.  Colon cancer isn’t going to kill him — his lungs will.  Or will they?

Let’s go over the myriad of things that could happen to him.  Let’s say he gets too deeply sedated due to the pain of the colonoscopy.  That’s simple — he just gets intubated.  Now we have someone with severe enough COPD that his lungs don’t even provide enough oxygen for his body, and he’s intubated.  Anybody that knows anything about medicine knows this is a terrible situation.

Let’s say he has diverticulosis.  Always good to know.  Let’s say one of them gets perforated.  Very real potential complication of a colonoscopy.  Now we have a 65-year-old gentleman, who requires supplemental oxygen even without any exertion, who has a perforated colon.  Anybody who knows anything about medicine knows this is a terrible situation.

Let’s say he does great through his colonoscopy.  In recovery, he starts experiencing chest pain.  He’s in the hospital, so this is the perfect place to have a heart attack, right?  To the cath lab he goes.  Blockage detected and artery stented.  Success!  Then two days after the cath, he stops making urine.  Contrast-induced nephropathy necessitating dialysis.  Anybody who knows anything about medicine knows this is a terrible situation.

Let’s say he has a pretty large polyp.  Yay for colon cancer screening!  The polyp gets removed, colon cancer mortality avoided.  The next day, when he resumes his anticoagulation, he has a massive GI bleed.  Back to the hospital, he goes, now with a whole new set of risks.  Anybody who knows anything about medicine knows this is a terrible situation.

Or, let’s talk about the prep.  Maybe he gets dehydrated during the prep.  Or worse, incomplete prep, unable to visualize colonic mucosa.  Looks like he’ll go through the whole process again.  Anybody who knows anything about medicine knows this is a terrible situation.

But all of those ideas are far-fetched.  Right?  Over the past several months, I’ve had two family members go into the hospital for “routine procedures” — neither one made it out alive.  These aren’t my patients — they’re my family.  They both passed away from routine screening.

Colonoscopies are great.  They work, especially for otherwise healthy individuals.  I’m not arguing that.  But you don’t need a medical education to send everybody for a colonoscopy like the HEDIS measures want.  You need a medical education to know who shouldn’t be screened for colon cancer.  Maybe that’s the problem: people who don’t know anything about medicine are making the rules.

Back to my patient — I’m currently praying that occult blood card comes back negative.  I’m not worried about colon cancer. I’m worried about the potential colonoscopy.

The key to preventing depression in residents? Value young physicians. 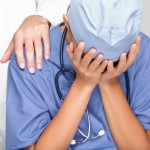 The difficult questions have to be asked in the exam room