In neurology clinic, I was asked to see a young man with epilepsy — a seizure disorder — due to cerebral palsy from birth. It was one of my first clinical encounters of my first rotation of medical school, the tenuous transition from knowledge-absorber to translator and caretaker. I walked in to find a patient who was wheelchair-bound and largely non-verbal, and who interacted with the world by tracking gaze and moving his arms. He held a toy in one hand that he rotated constantly; the other lay limp on the side of the chair.

I read in the medical record that he attended a day program where he enjoyed watching other children play ball and liked giving high-fives. So instead of launching immediately into an interview of his parents for recent medical symptoms, I asked my patient for a high-five.

At first, he didn’t respond, his body like stone. The father patted him on the chest several times, hard, signaling to his son to make the movement while asking him in Spanish to do so. I winced at the vigor of each tap. But soon the young man responded. He put out his hand towards mine, his eyes locked on me, and we high-fived, softly and repeatedly. When I move my hand higher, or to the side, he followed excitedly, and he did not want to stop high-fiving me until the visit ended. “He likes you,” the father said, his fiercely protective expression softening a bit.

When my portion of the interview was over, the supervising neurologist entered the room. After ensuring that the patient’s seizures were under good control, the doctor asked if the family wanted to consider an injection that would help reduce the young man’s oral secretions.

“Won’t that give him a dry mouth?” asked the father. “I don’t want him to suffer. I don’t want his mouth to be dry.” There was so much history to his mistrust; when the doctors had previously offered a surgery to help improve his son’s ability to walk, the son had ended up in this wheelchair. The mother shook her head before the words even left the doctor’s mouth, her red lips pursed. She looked at me imploringly, as if I would understand.  “No, no, no,” she said, holding up her arms to me. “As long as I have these hands, I can clean his drool.” Then, to the doctor, “I don’t mind.”

The doctor inquired again, suggesting that the oral secretions might be minimized by this injection and that it wouldn’t be permanent. “As long as I have these hands,” the mother said again, and I could read the depths of her care by the way she held her hands in the air, emphatically, hands that had mothered a son for many more years than she could have ever anticipated, but hands that had done so patiently, willingly, with no hesitation. Her hands will wipe his drool, no matter how much drips out of the corner of his mouth. She does not mind.

Now that I have completed most of my medical school rotations, I find myself returning to the phrase, “as long as I have these hands.”

As long as I have these hands: I can get my patient a juice box from the refrigerator if she is thirsty. I can feel the cervix of a laboring woman for the dilation that heralds delivery, and grip the slippery head of the baby when it makes its way out. I can throw the closing stitch of a laparoscopic donor nephrectomy in which a wife has given her left kidney in a long chain of organ donations to save her husband’s life. I can hold the hand of an old man while explaining that spots of cancer in his lungs have spread to other parts and with the other hand pass a tissue to his silently weeping wife. I can hold a large needle into a pocket of someone’s abdomen for an hour while liters of fluid drain to relieve the terrible swelling caused by liver failure. I can play Uno with a pediatric car crash survivor who is depressed from a long rehabilitation. Treating and healing, two parallel acts that are not always synonymous, both happen by the hands.

The journey to medical school is often one of textbooks and articles, taking place in the pages. But the learning of medical school, the choreography of the care, is etched in the muscles like a dance.

Dying is a vexing problem for the medical profession 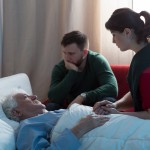 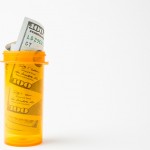